The University have released a statement

A Queen’s University Belfast student has tested positive for coronavirus.

Both cases were confirmed by the Public Health Agency this afternoon.

It is understood that one patient had travelled from Northern Italy, where over 3000 cases have been recorded, whilst the other had been in contact with a patient in the UK who had tested positive. 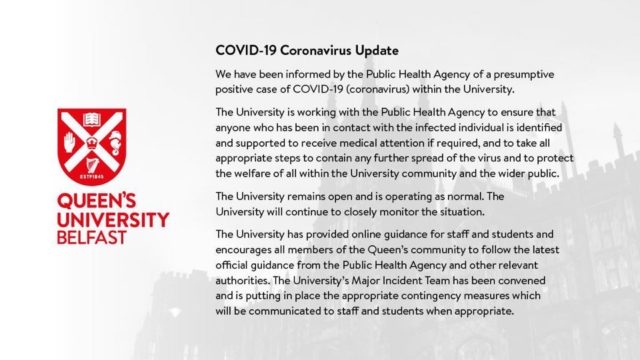 QUB have released a statement

In a statement, the university said that they are, ‘working with the Public Health Agency to ensure that anyone who has been in contact with the infected individual is identified and supported to receive medical attention if required, and to take all further steps to contain any further spread of the virus and to protect the welfare of all within the University community and the wider public’.

Where some schools and universities have been closed across Northern Italy, the statement reaffirmed students that the it will remain ‘open and operating as normal’.

Dr. Michael McBride, Chief Medical Officer for the Department of Health, described how both Northern Ireland the Republic of Ireland remained unaffected due to still being within the containment phase.

Quiz: How well do you remember She’s The Man?