We met the angry protesters and some very confused shoppers

Christmas shopping is now fully underway, but today there was something more political in the air on Britain’s busiest street.

Instead of picking up a new blender or some novelty bits from M&M’s World, hundreds of people marched through Central London against last week’s government decision to bomb Syria and go to war with ISIS.

Three days after Tony Blair argued Britain’s case for entering the war in Iraq in 2002, at least 150,000 people turned up in London to protest. Now 13 years later a few thousand – at a push – turned out to protest against the bombing of Syria.

There wasn’t a Facebook event for the Iraq war protests, but over 14,000 people claimed to be attending today’s demonstration and didn’t show. Whether we, as a nation of angry people, have lost our appetite for protesting or this generation are simply less politically active than the last – the turnout noticeably fell short.

Less people marched for Syria than the disappointing amount who stood against the scrapping of maintenance grants last month.

We went along to the march from Oxford Street to Westminster to speak to those protesting and bumped into a few very confused shoppers along the way. 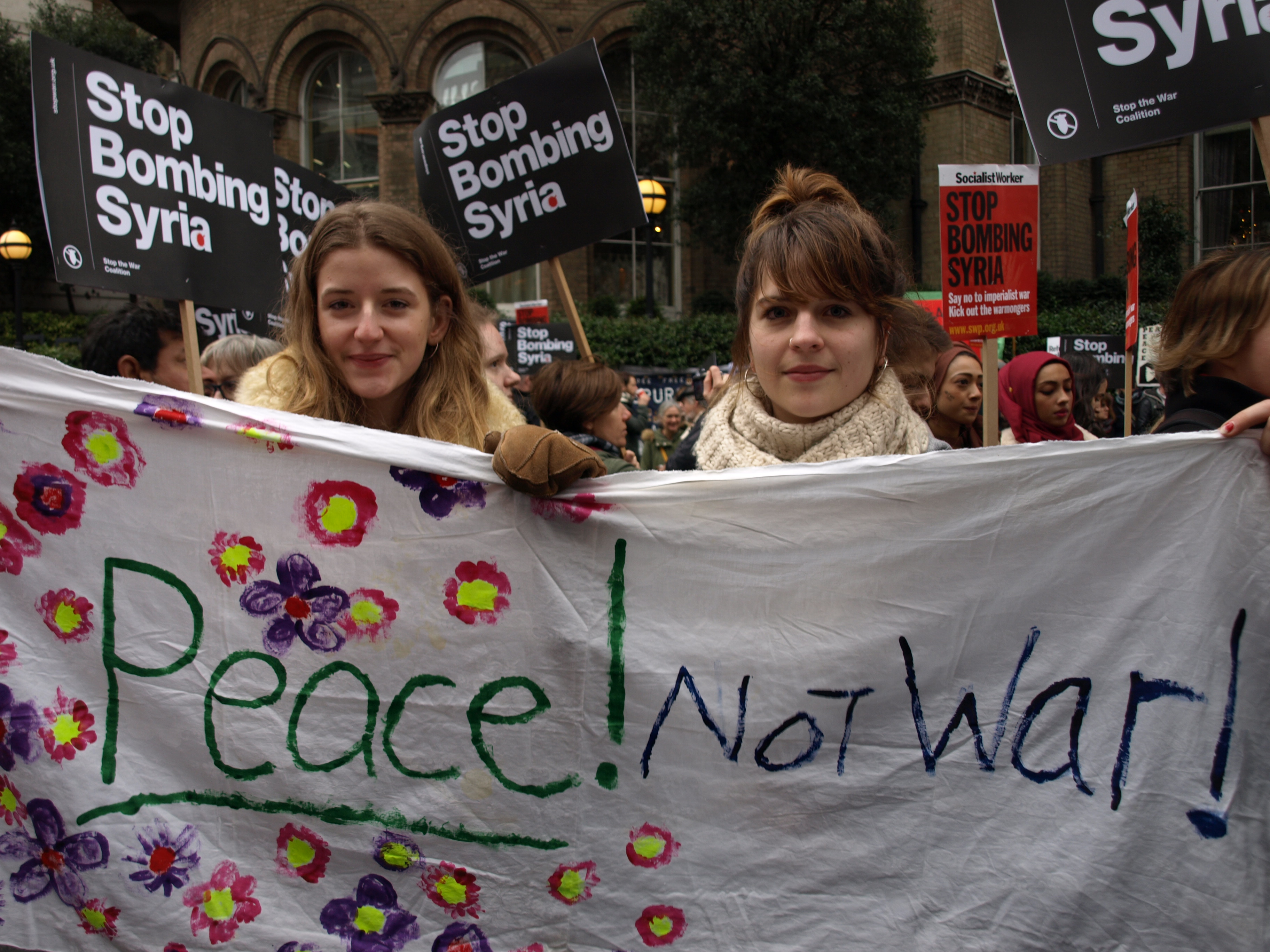 “We made this sign for the Iraq war protest when we were just 10 years old. The situation in Syria feels very similar to Iraq and we have to make a statement that bombing people is not OK.” 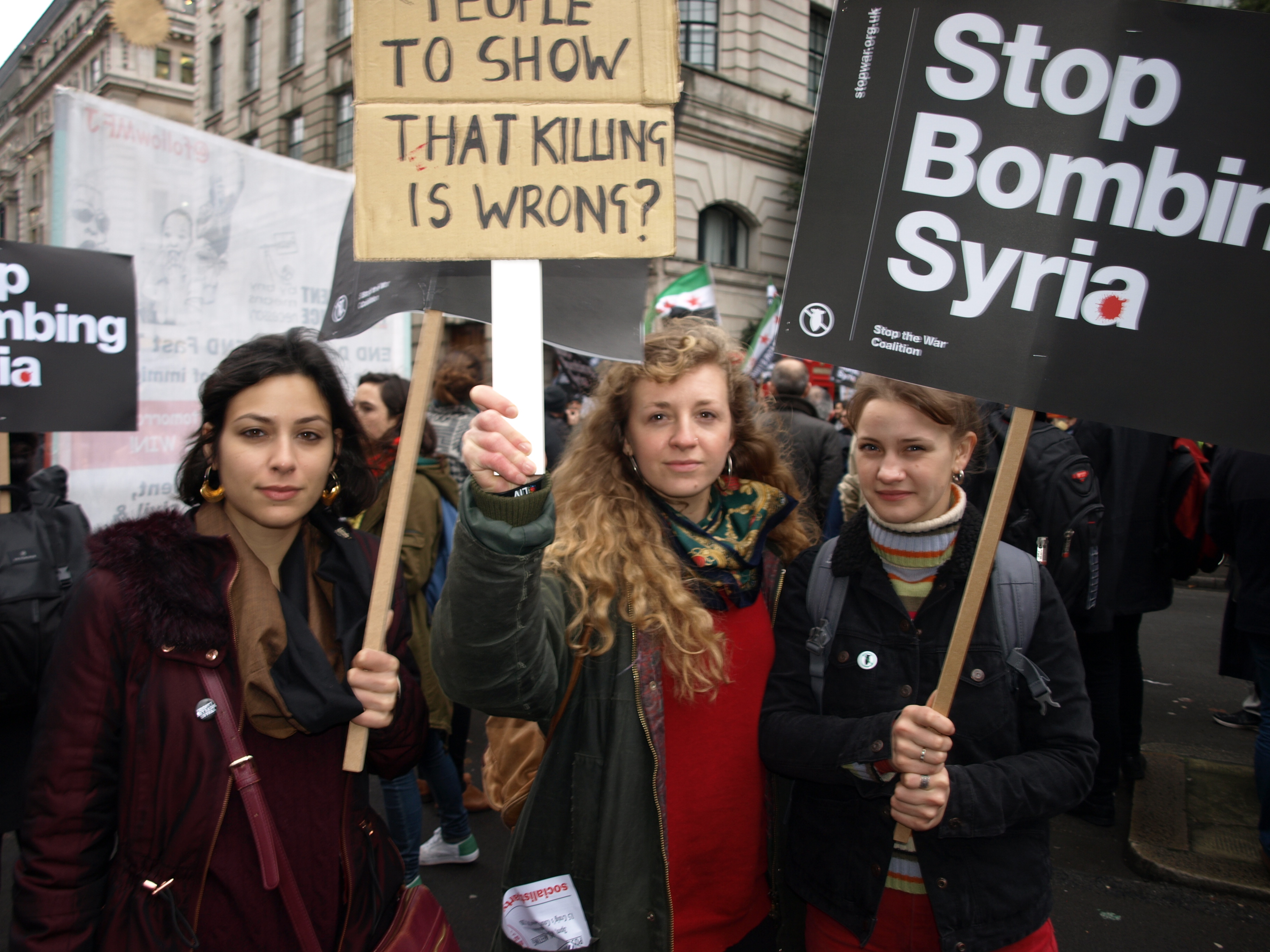 “We’re here to stop them dropping bombs on Syria. By marching through Oxford Street we want to send a message and raise more awareness.” 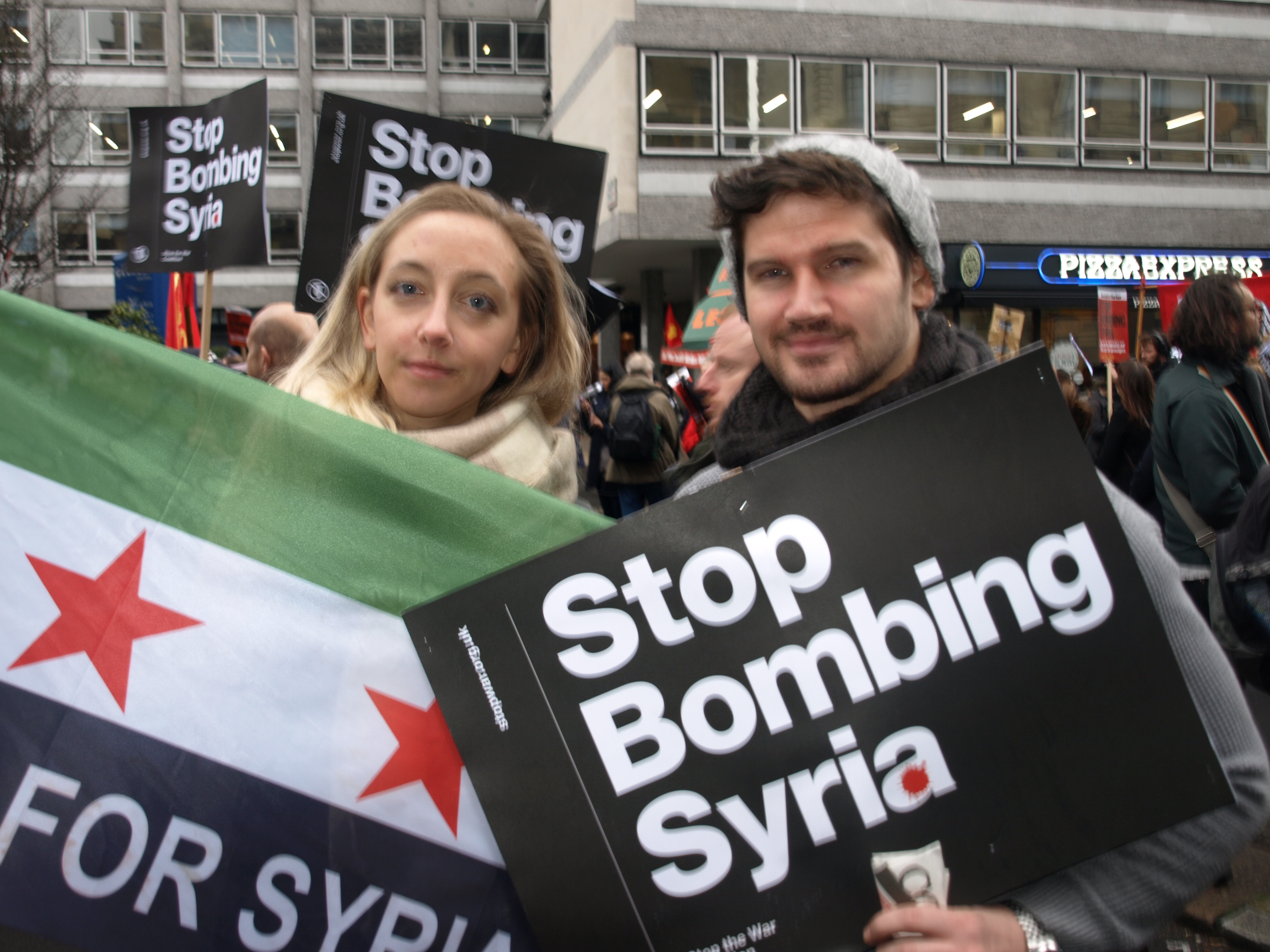 “After Paris there has been fear, hate and scaremongering. You can’t ever fight hate with hate. 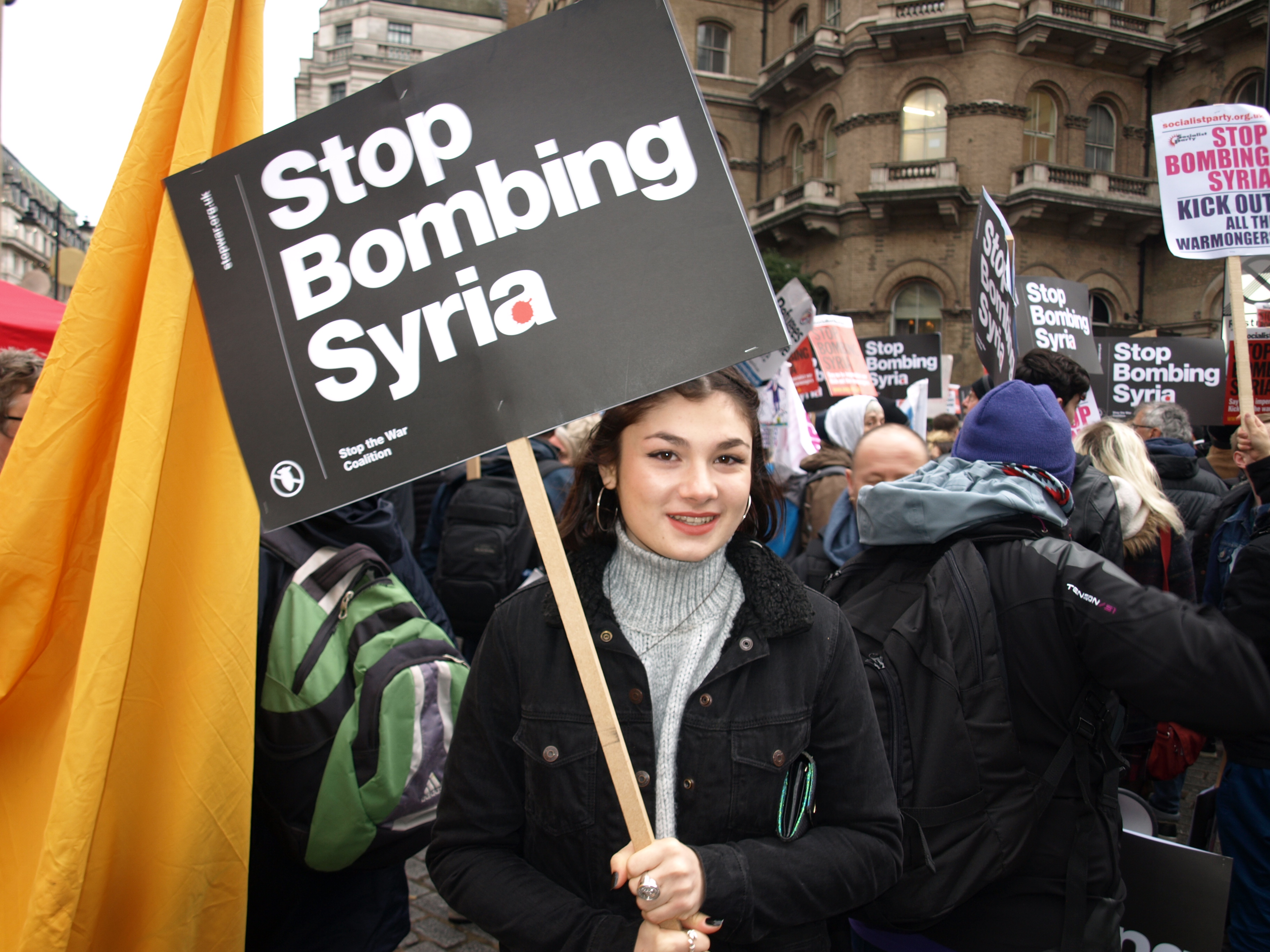 “I don’t believe dropping bombs is going to make any difference to stopping ISIS, whatever the media say . When we drop bombs we kill innocent people.” 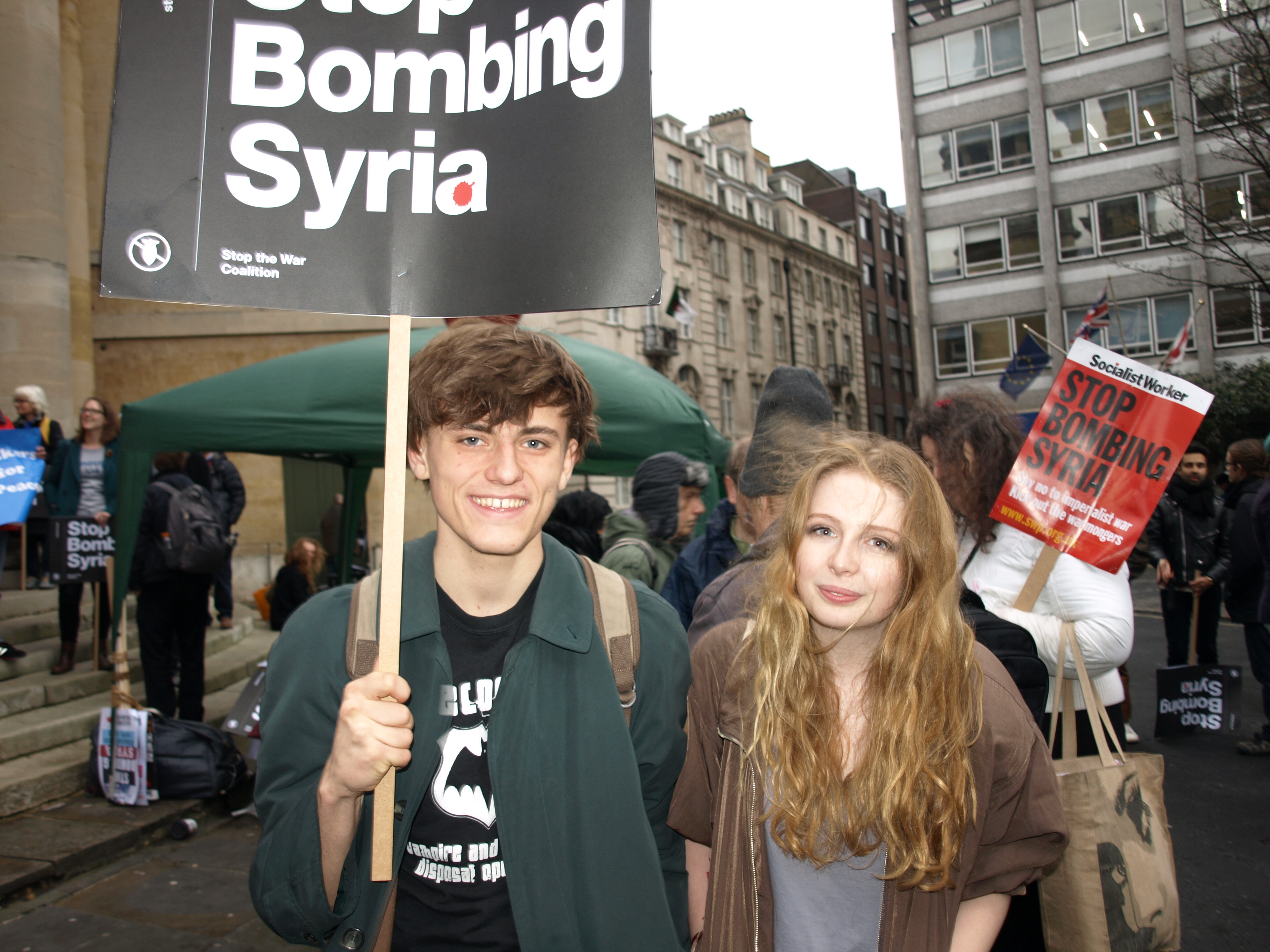 “We want them to stop bombing Syria! We’re here because we’re part of the electorate and think we can make a difference.” 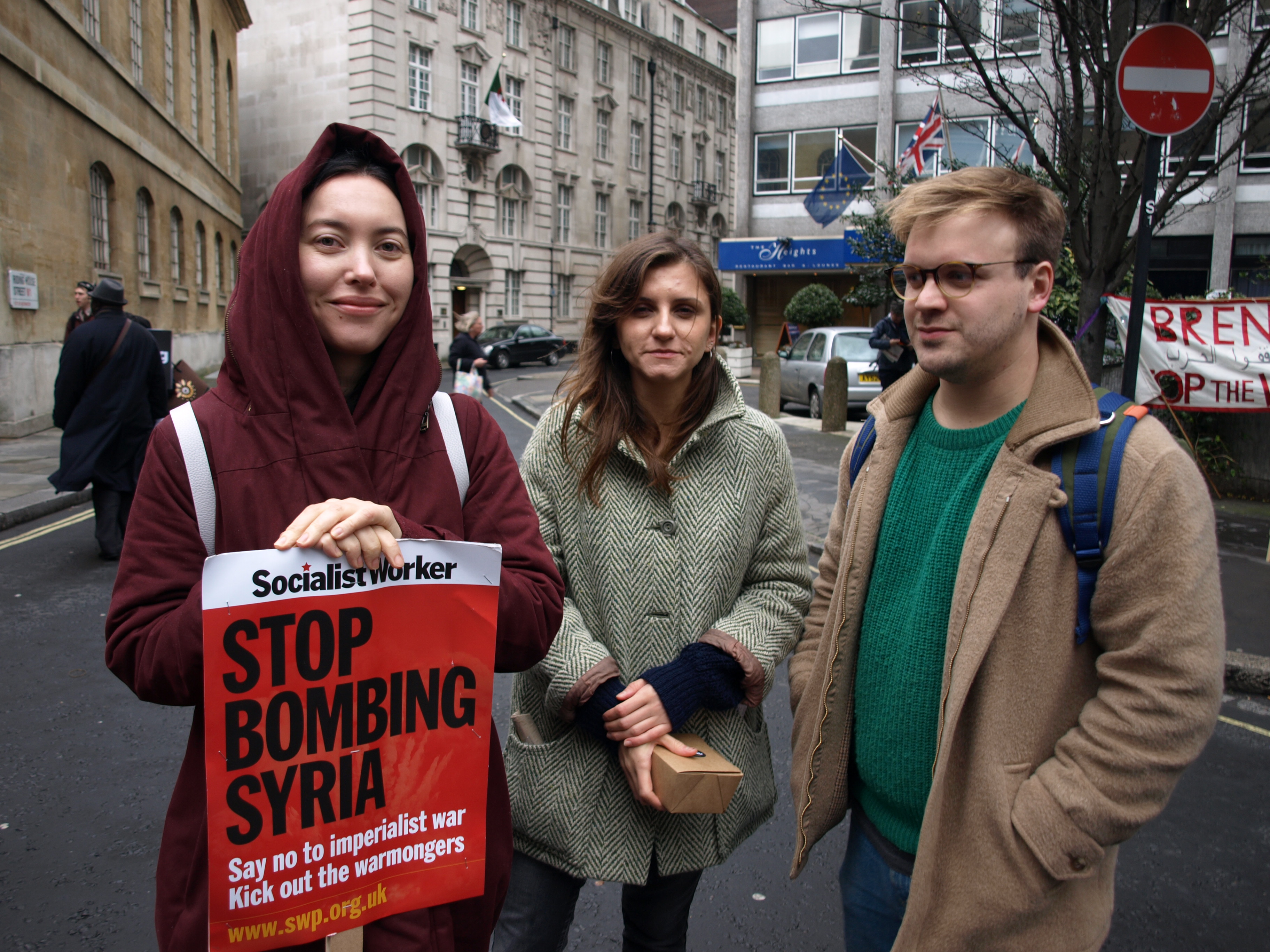 “We’re exercising our right to protest, which is extremely important. Bombing people is just wrong, it’s black and white.” 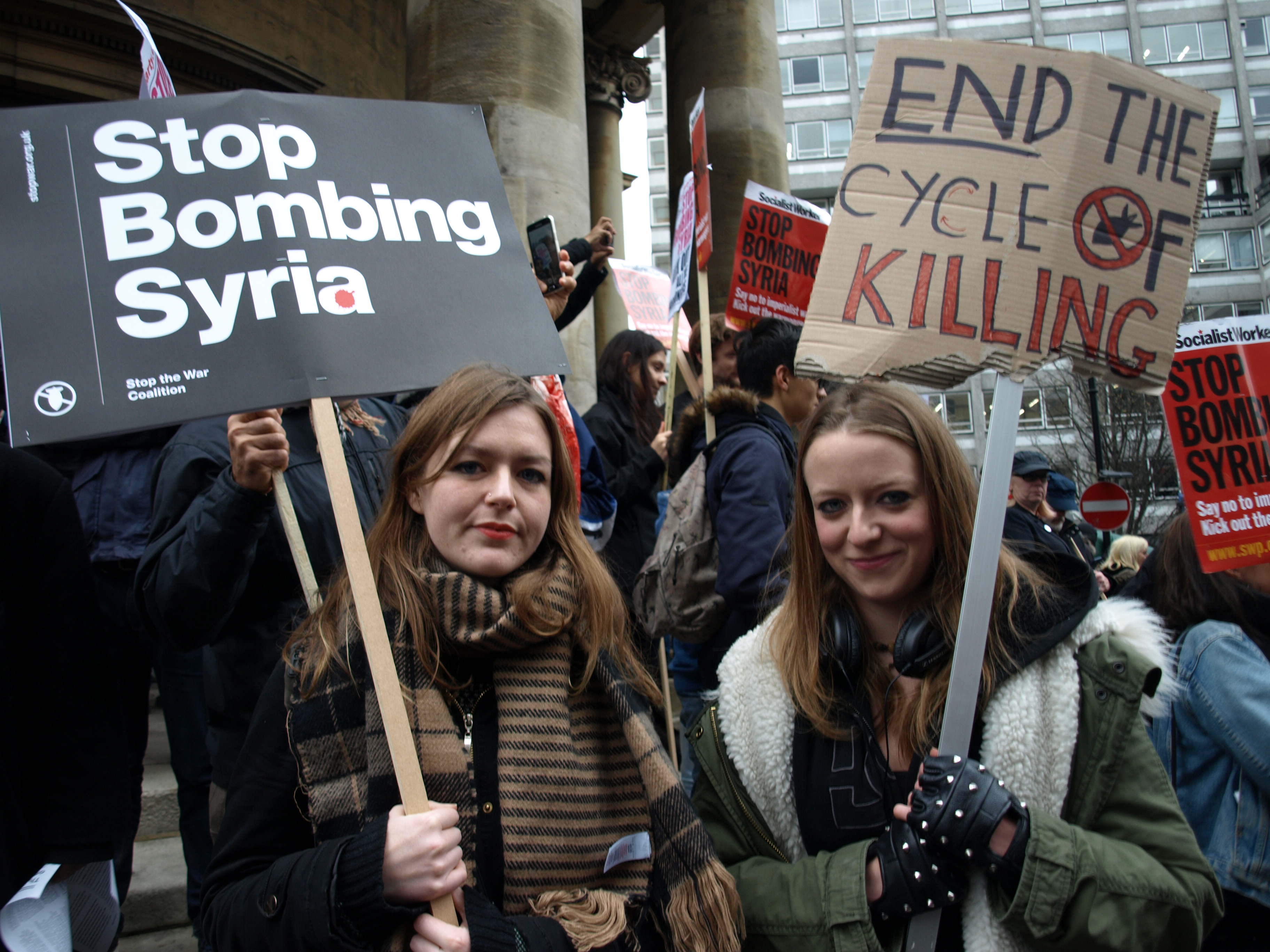 “I’m not saying I have all the answers, but I don’t think bombing is the right thing to do. Of course we’re angry about what ISIS are doing, but bombing will hurt innocent people and could cause an even bigger refugee problem.” 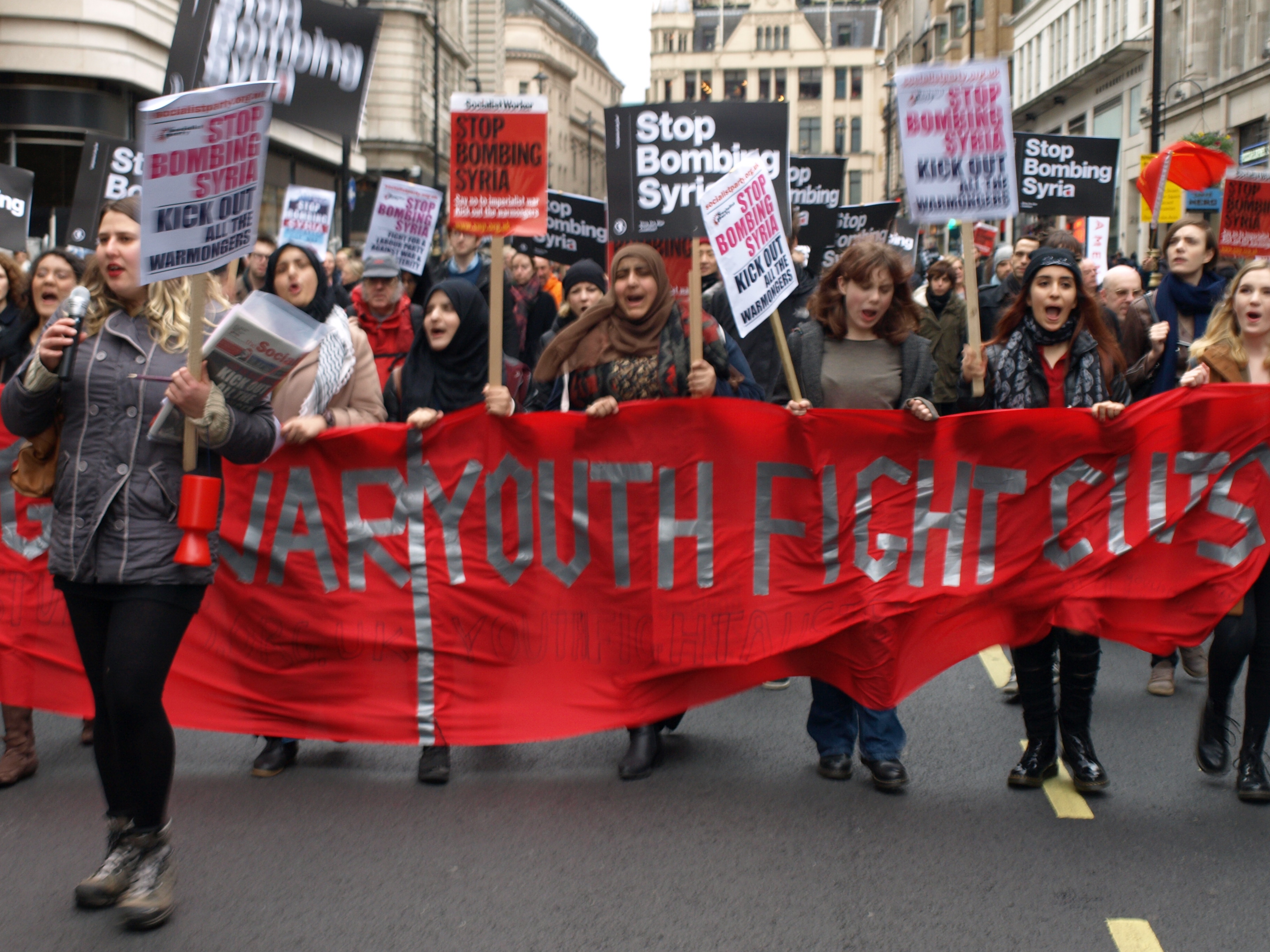 Without any real fanfare, the crowds suddenly started marching on to Oxford Street, heading towards their final destination at Westminster.

Among the shouting and placard-waving protesters there were ordinary shoppers trying their hardest to enjoy a Saturday afternoon Christmas shopping on Oxford Street. 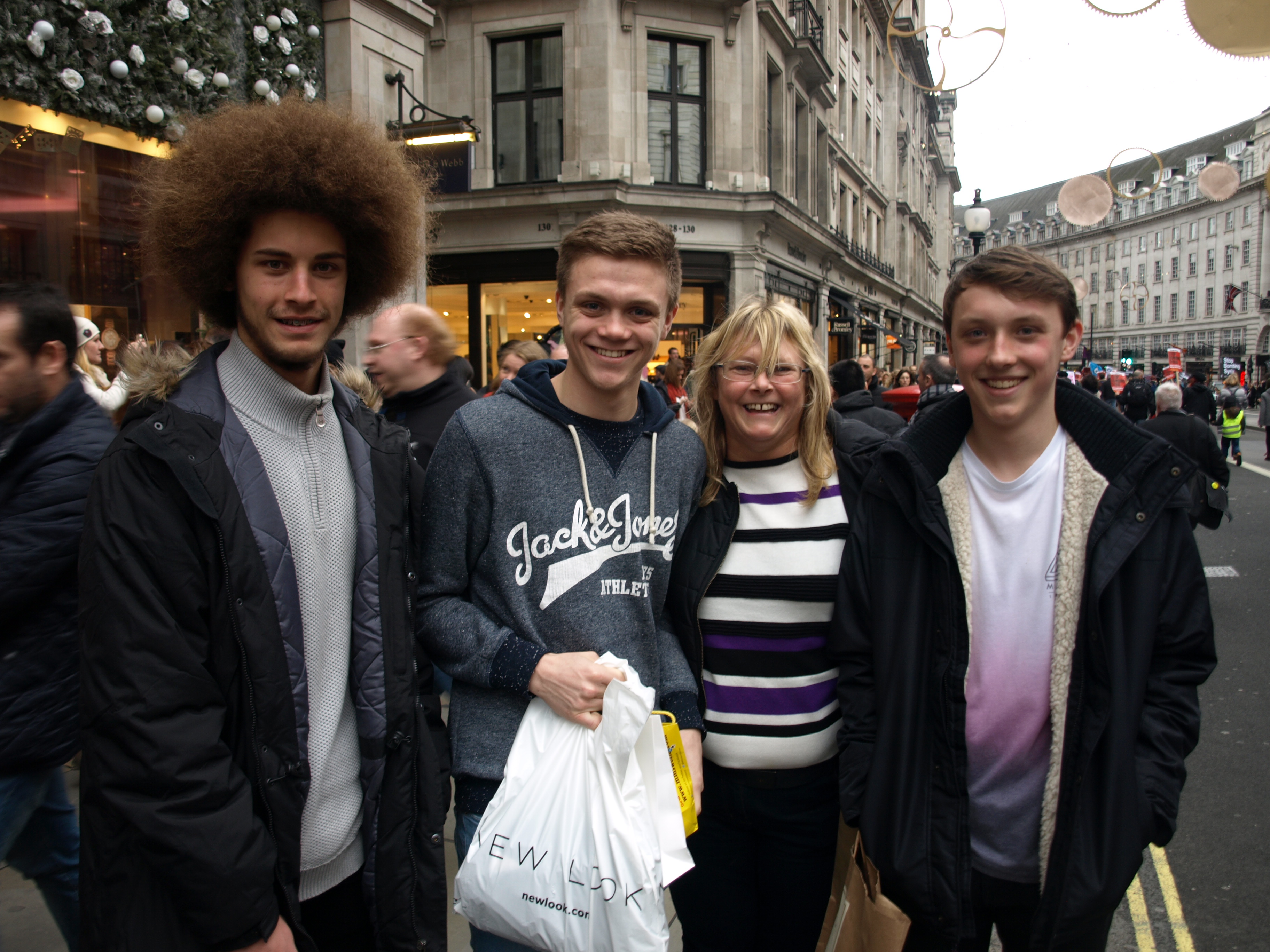 “They’re definitely out in full force today. We didn’t know anything about it.

“Are they marching against David Cameron? We won’t be joining in.” 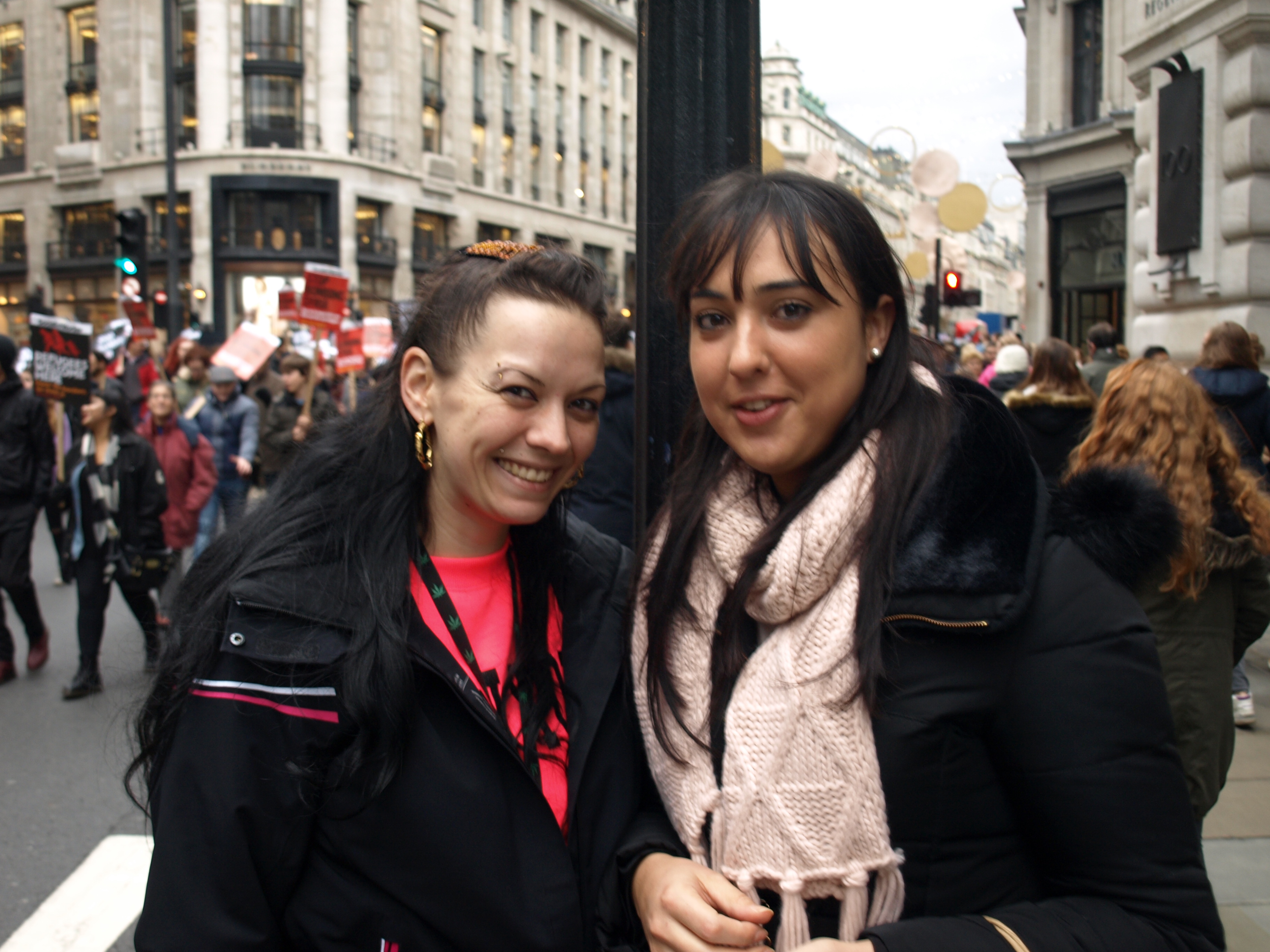 “I really don’t like this, it’s strange to see protesters here. We’ll carry on shopping.

“I am against bombing in Syria though, a lot of people will die. That’s not right.” 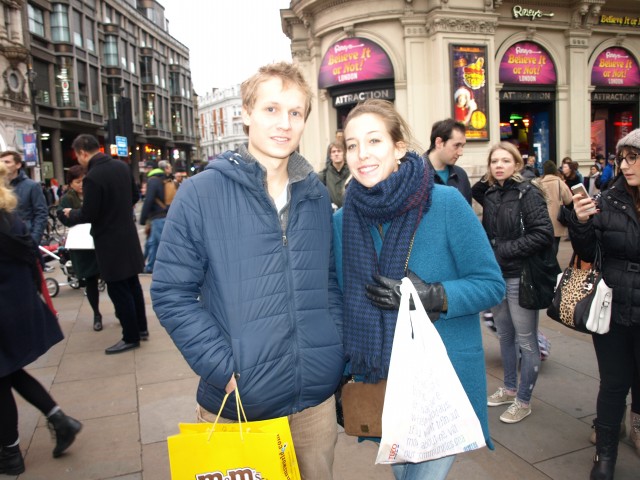 “We’re here from The Netherlands! We’re only in London for the weekend.

“There were lots of people dressed as Santa on bikes here a minute ago, so we didn’t expect a protest to come through.

“We have similar thoughts at home though, I don’t think we should be bombing Syria.” 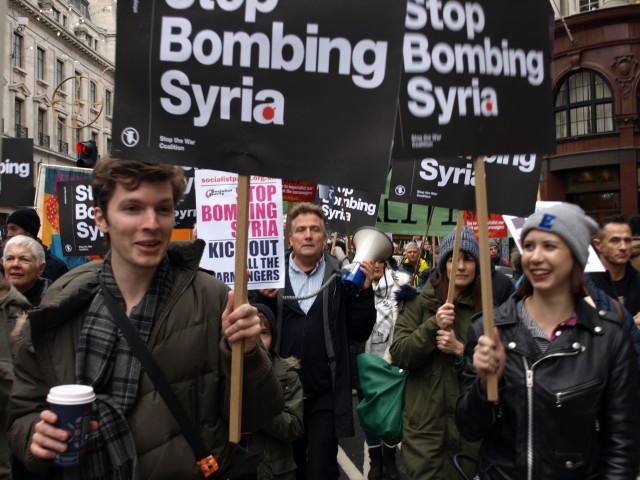 “It’s really good exposure to be marching through Oxford Street like this. We’re chanting ‘bombs are dropping while you’re shopping’ to make a statement and hopefully stop the war.” 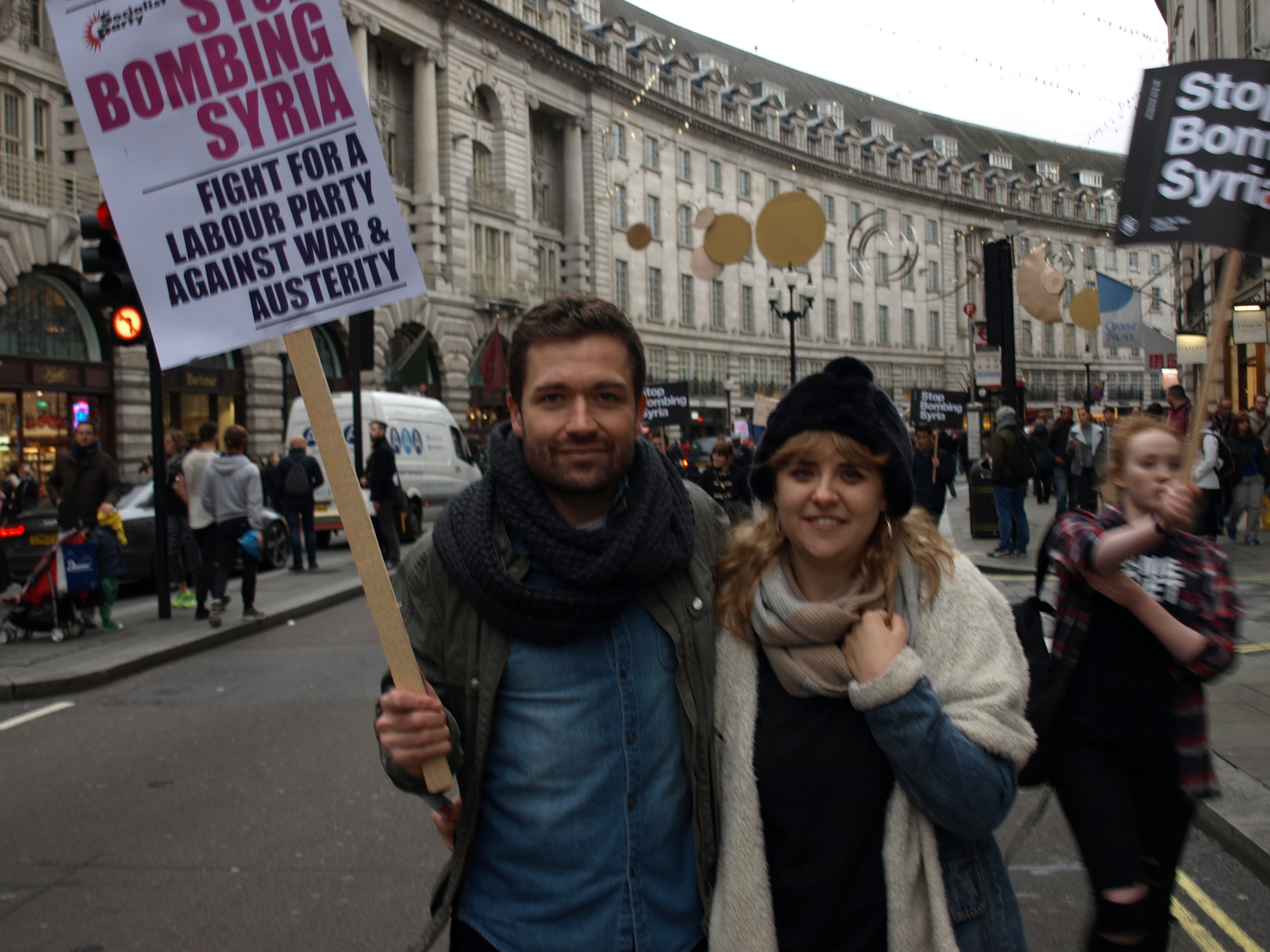 “We’re obviously against the bombing, not just from Britain but from America, France and other countries too. We’re killing people.” 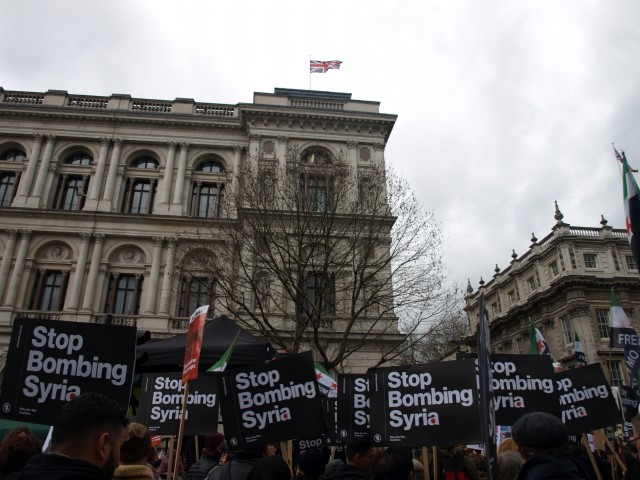 The protesters reached their destination at Westminster and gathered to listen to a range of speakers, including Syrians themselves. From a very politically active musician to a clown who apparently pops up at most demonstrations,  the crowd here was far more mixed.

Overheard a girl quietly whispers “I thought they were bombing ISIS, who’s Assad?” 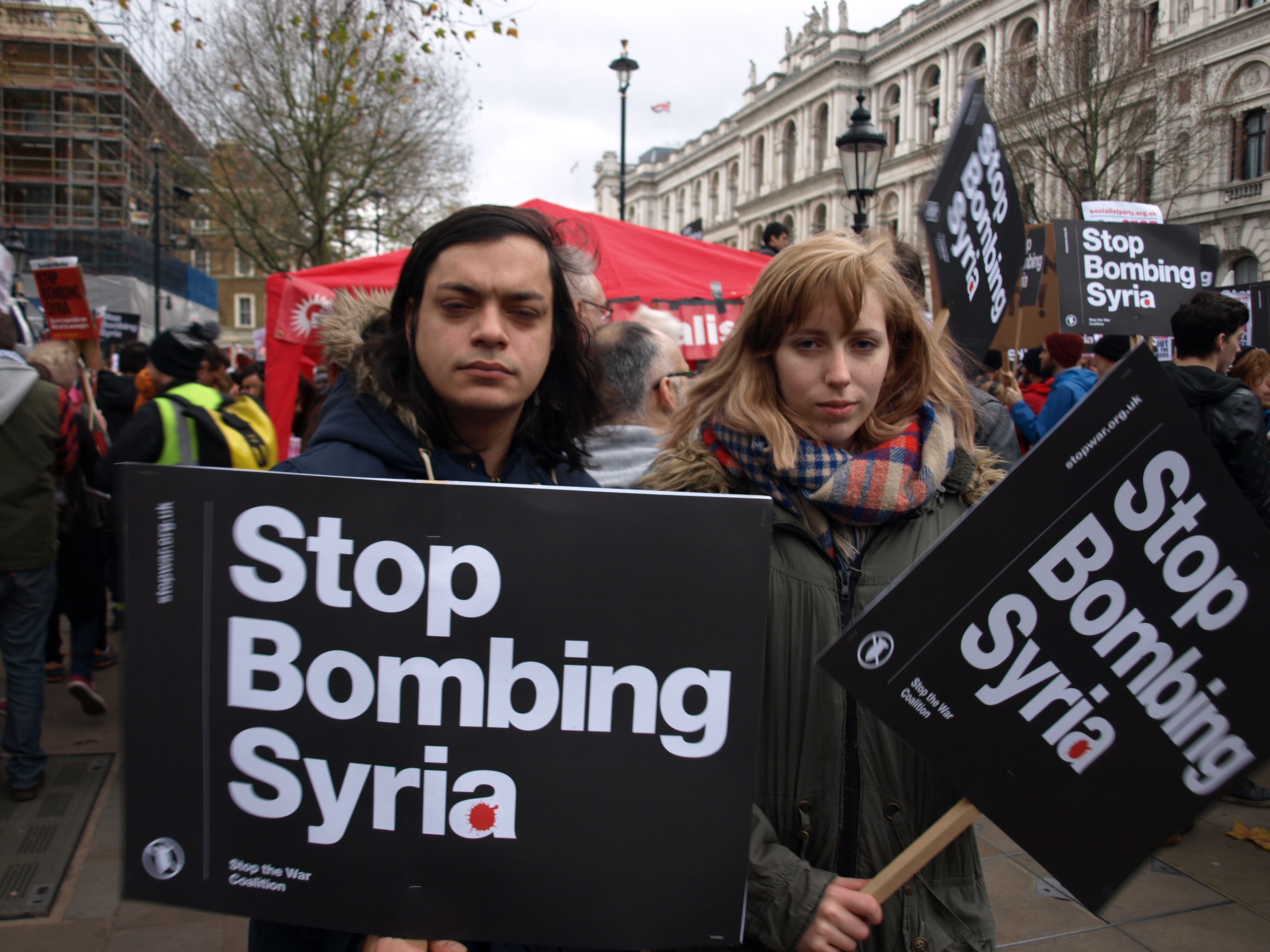 “Today we’re trying to send a message in numbers. Bombing is a rushed measure and is terrible logic from the government. War creates war.” 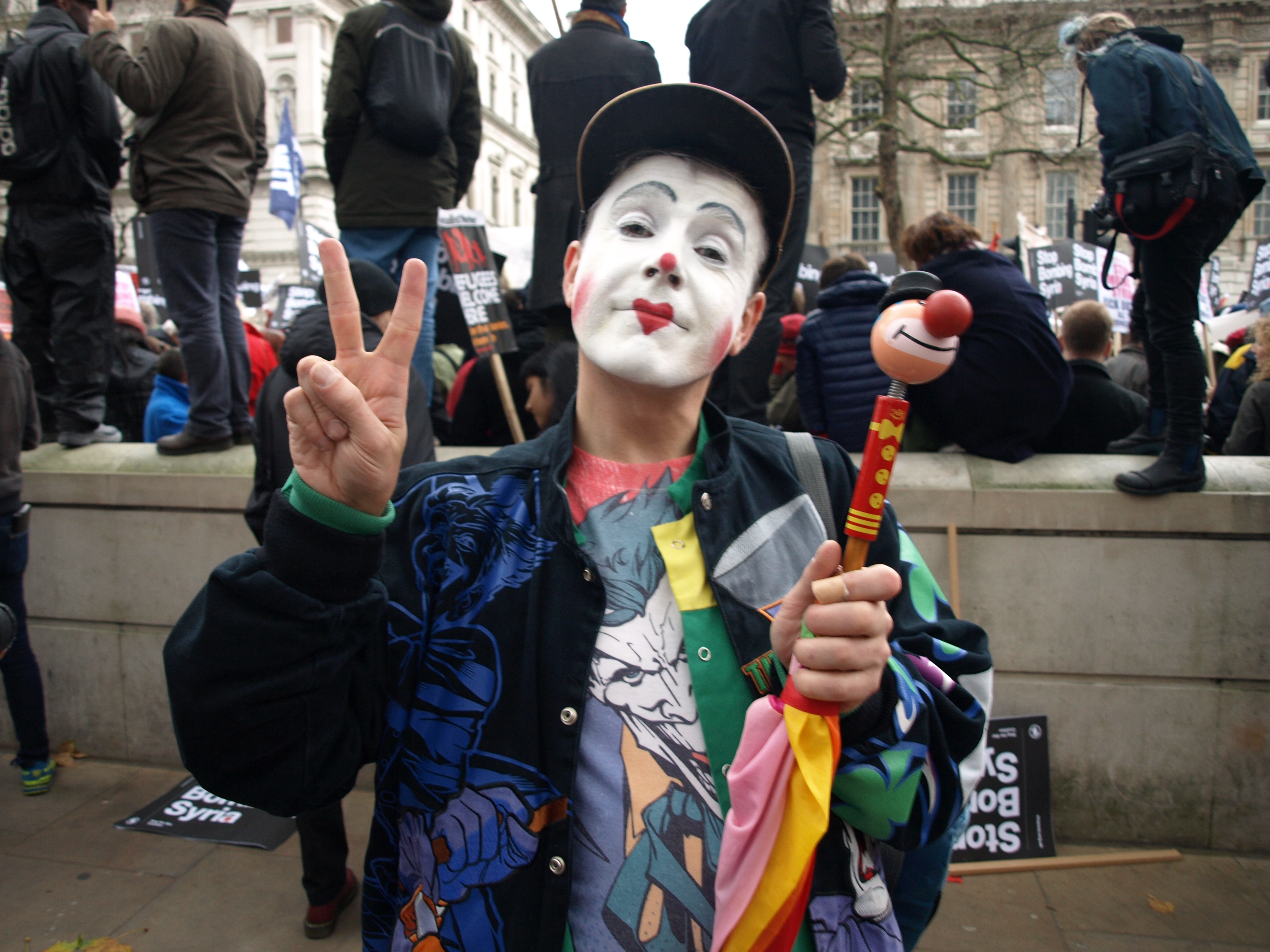 “I always show up at these demos for a bit of a morale boost. It’s not shameless promotion, we should be helping refugees and not bombing Syria.”