The student maintenance grant protest was a bit of a disappointment

Over 10,000 angry students said they were attending on Facebook and it was set to be the biggest protest since tuition fees went up.

Actually just 1,000 turned up for the latest march against cutting maintenance grants – proving student protests have fallen a long way since the rioting and fury of the 2011 uprising.

The main reason they were protesting today is because maintenance grants have been scrapped and replaced by regular loans.

While this won’t change anyone’s lifestyle in the short term, it will mean bigger loans, bigger debt and ultimately less access to higher education.

But there were no full-blown riots, fights or even litter dropping today. Student protesters are a lot more boring than they were in 2010 when tuition fees trebled.

The march took the lukewarm protesters from the University of London down to Westminster, the most eventful thing to happen was the downpour of rain and one smoke bomb going off towards the start – aimed in the direction of the journalists and photographers. While there might be some disturbances towards the end of the march, they’re nothing on the carnage and riots of 2010. 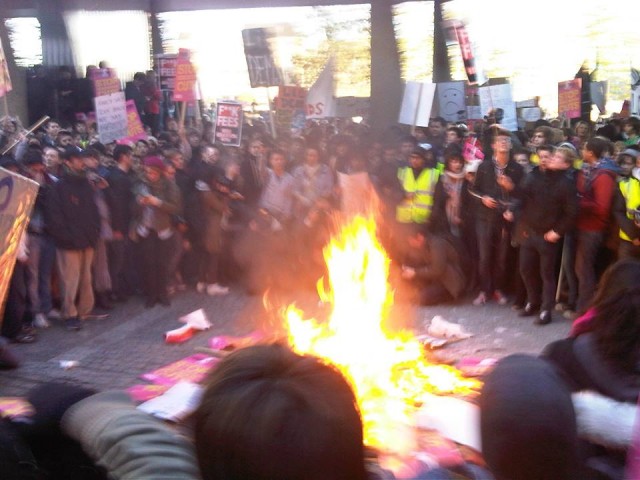 Scenes from the protests in 2010

We spoke to some of the protesters about why they were there and what exactly they were shouting about.

Cody: “We’ve come together as one main group and one organism to raise awareness about free education and fight against cuts to maintenance grants.

“Education is the core principal here.”

Jo: “I’m the Welfare Officer for UEA and Sam is the Environment Officer. We’re here to represent students who couldn’t make it down.

“The NUS hasn’t been united in the past, but it’s great to see people coming together today.” “We’re here to fight against the cuts. Our local MP couldn’t help us so we came from our sixth form in North Devon to protest today.”

Will and Jo – Leeds and Sussex 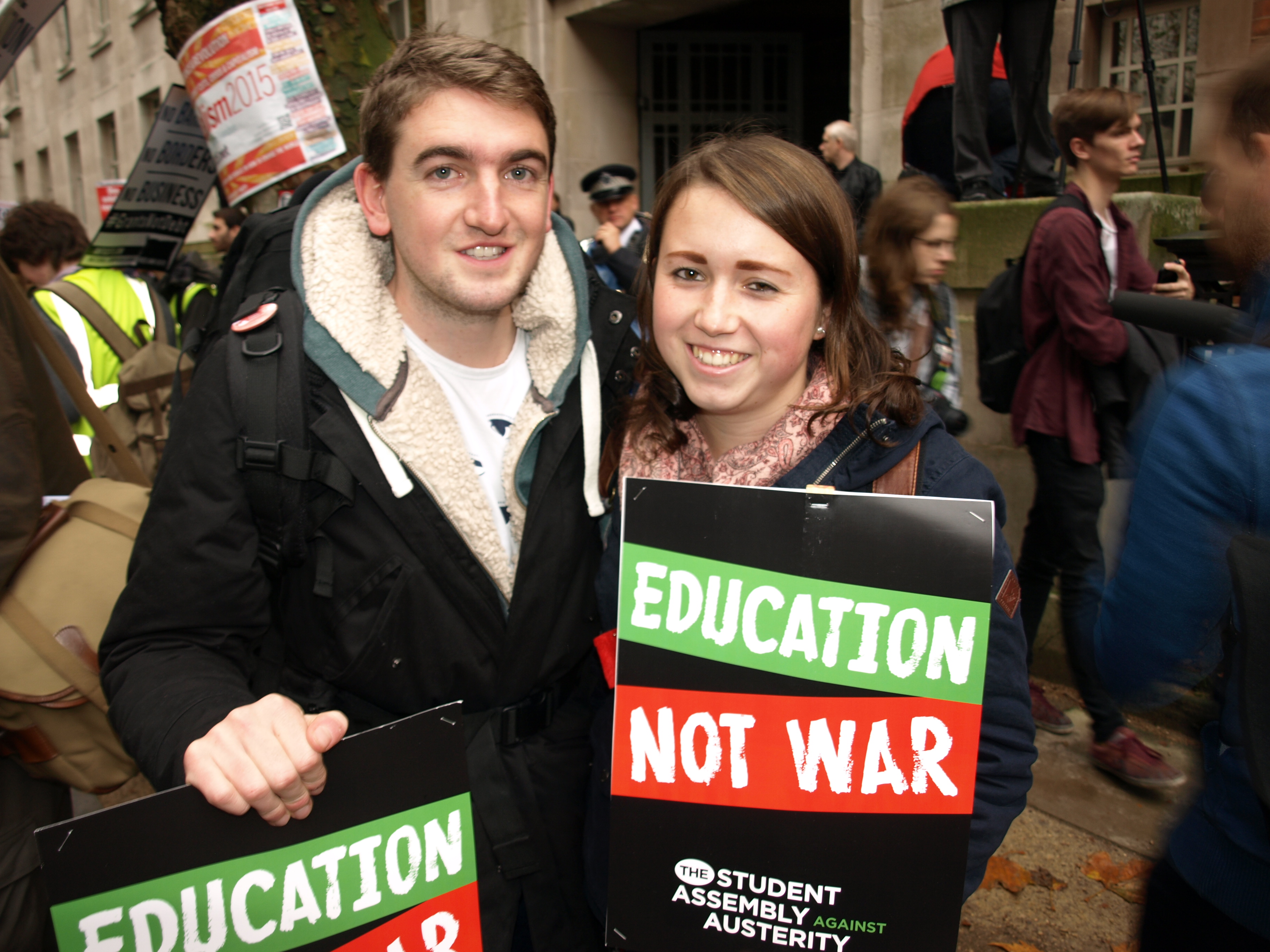 “We want to make sure the issue gets out there. Free education matters.

“I guess today is all about cuts.” 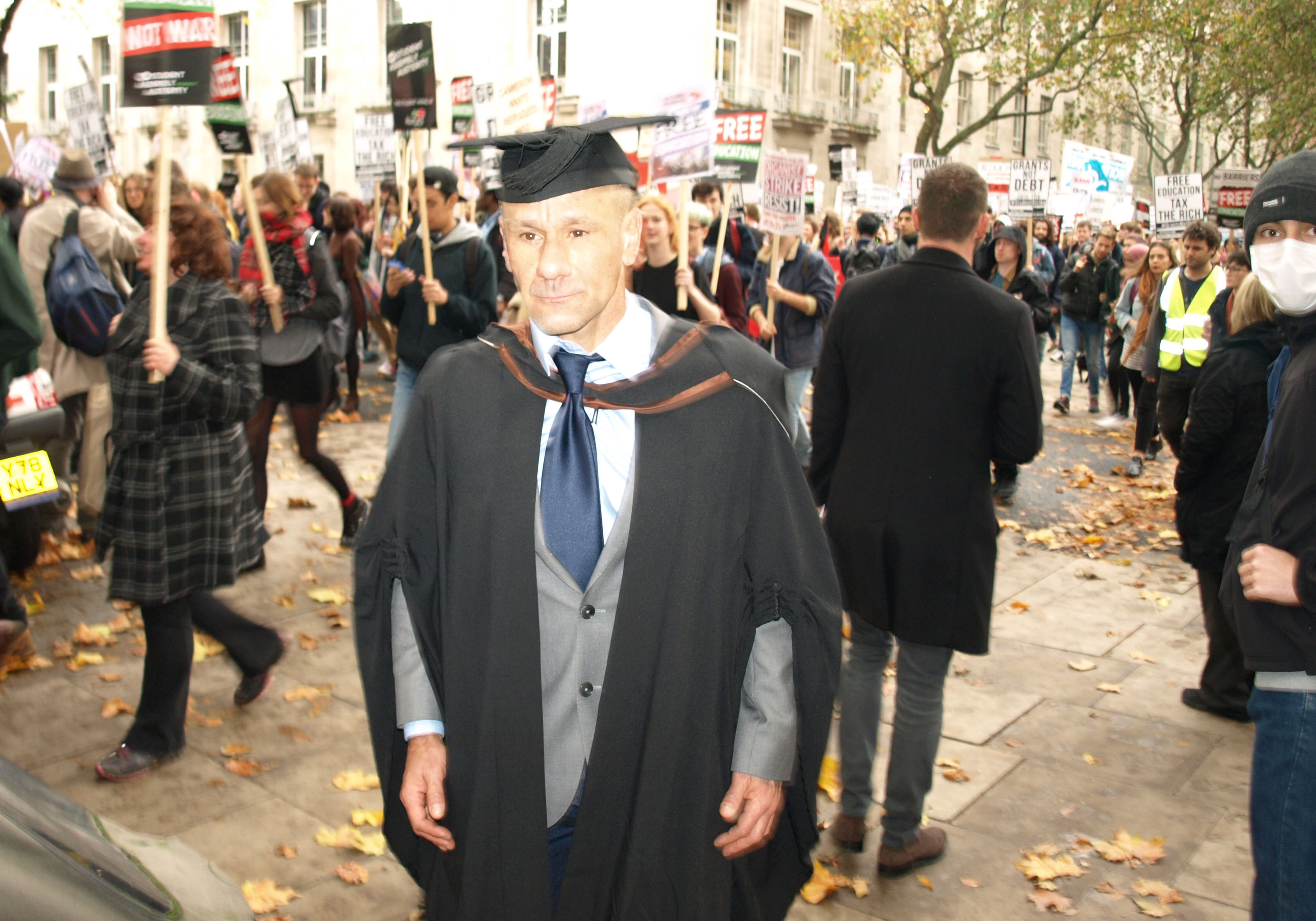 “I graduated from Birbeck today with a BA in English Literature.

“The protest hasn’t ruined my graduation day at all. I wish I could join them, I’m actually tempted.”

“The rain might put a few people off but we’re carrying on.

“We’re fighting for free education. It’s a right not a privilege. ” 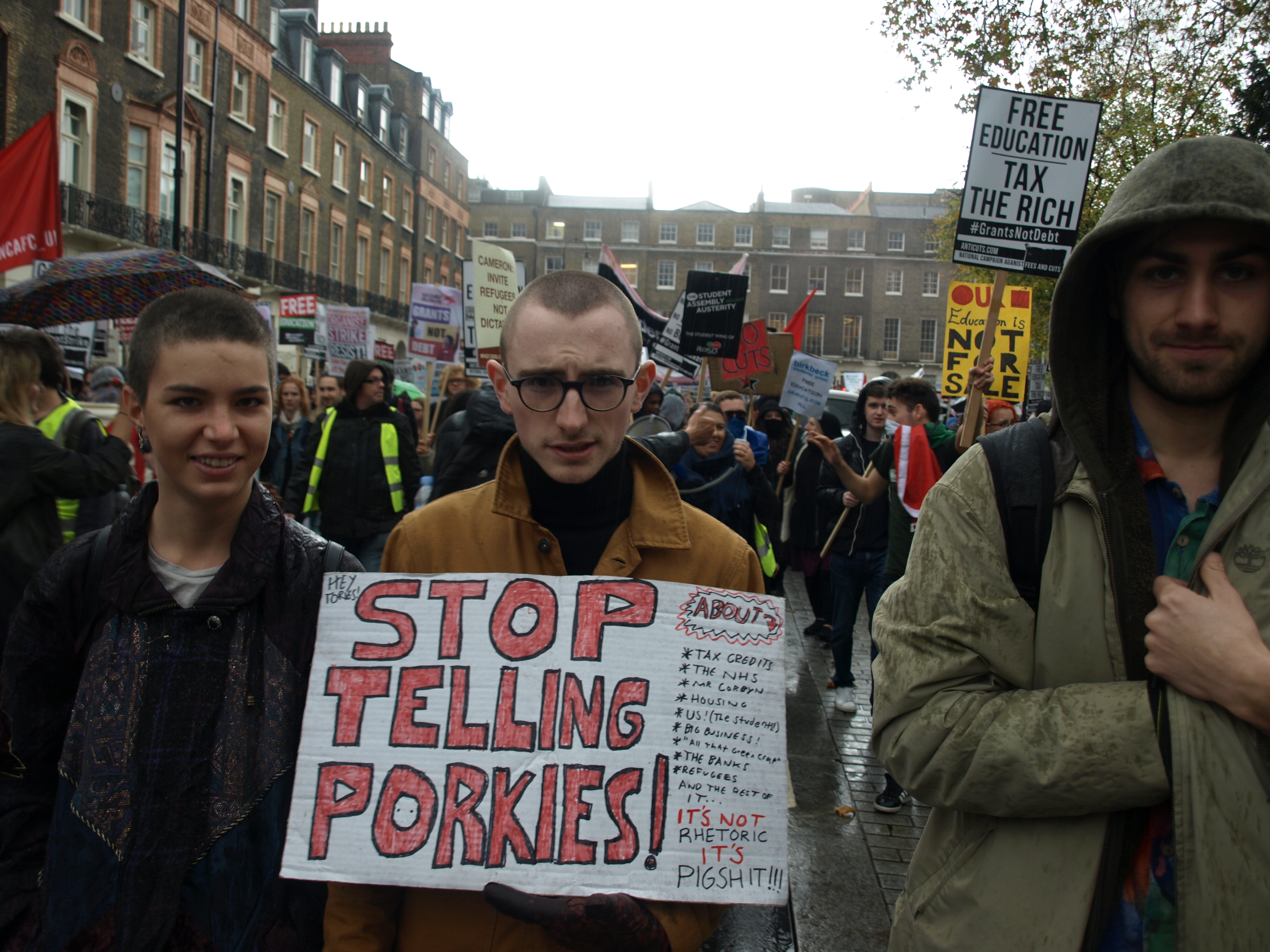 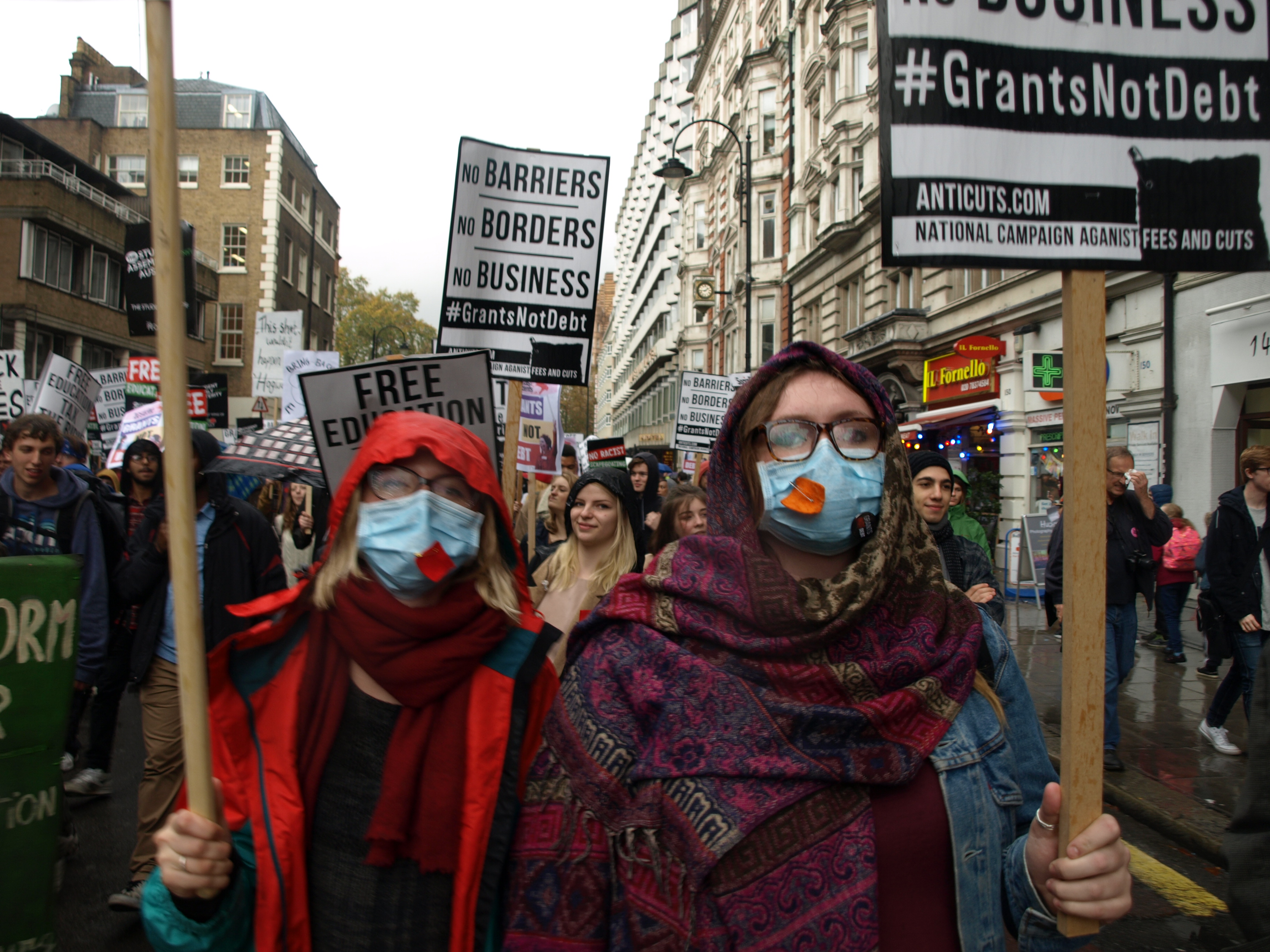 “We’re campaigning for free education without boundaries, but we have to head back to Warwick tonight.” 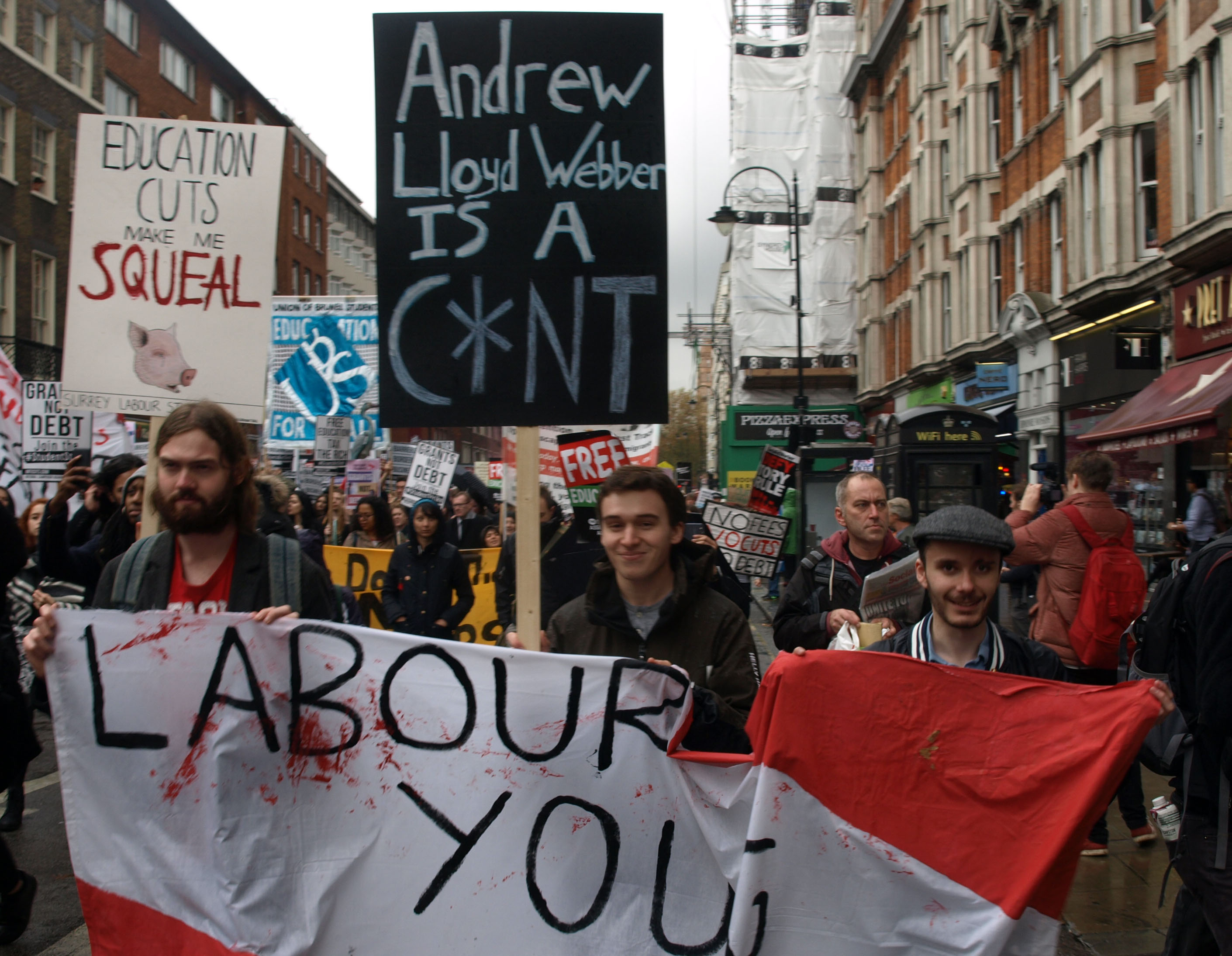 “I made this sign because of Andrew Lloyd Webber’s decision to fly from New York to vote in the tax credit debate.

“My mum doesn’t like me using the C-word but I had include it here.”

“David Cameron fucked a pig and now he’s fucking everyone else.” 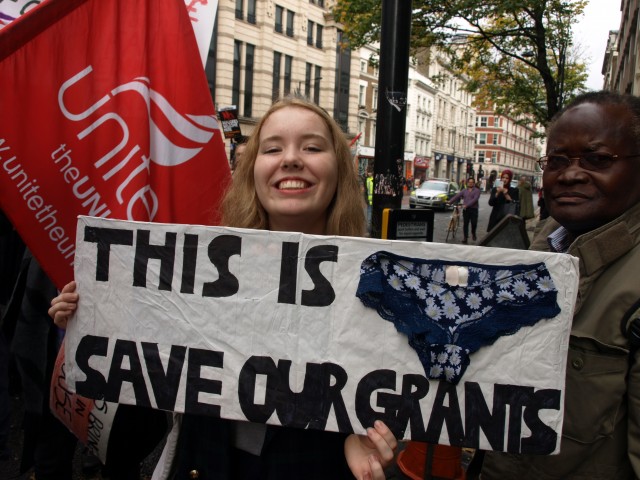 “Pants rhymes with grants, I thought it was quite catchy.

“I’m not at uni, I’m doing my A-levels in Loughborough and want to go to Bath or Oxford.”