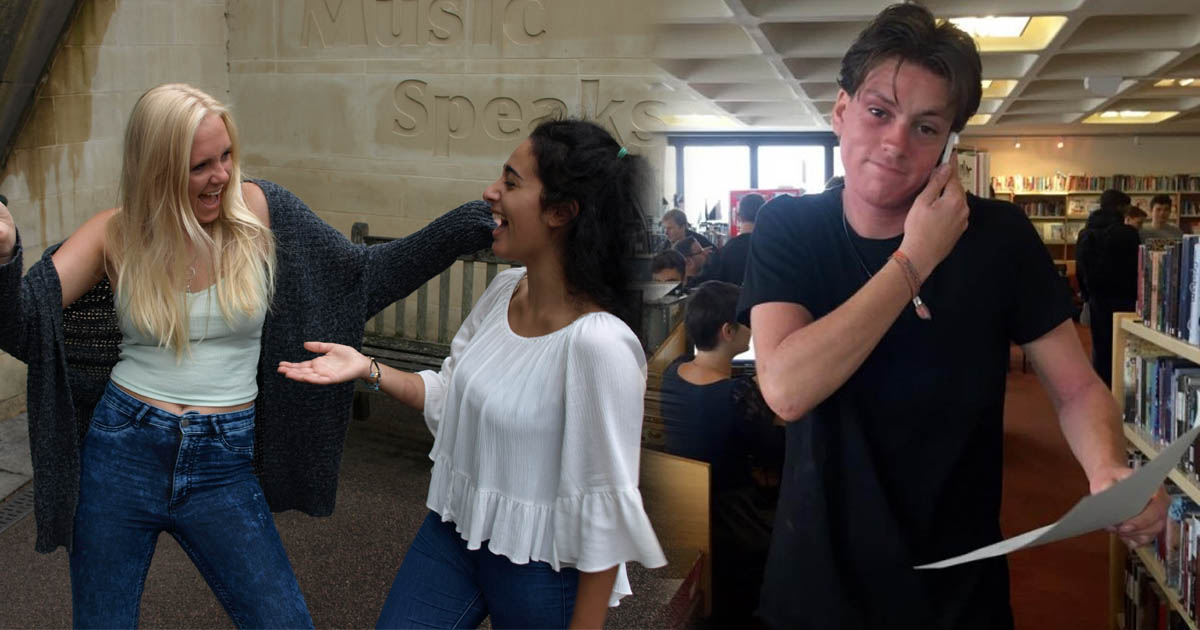 Pass the bottle of Dom

Elite A* and A grades have gone down from last year, but you wouldn’t know it from the cheers, squeals and rahs from the courtyards of Britain’s best and brightest schools.

Thousands of posh kids from London’s most exclusive schools are going to be swarming straight out of The Tatler Guide and into a uni near you.

We went to the some of the top public schools in the country to find out what the brand new freshers got and what they really think about uni.

See what the girls from Wimbledon High School and the boys from City of London really think uni is going to be like. 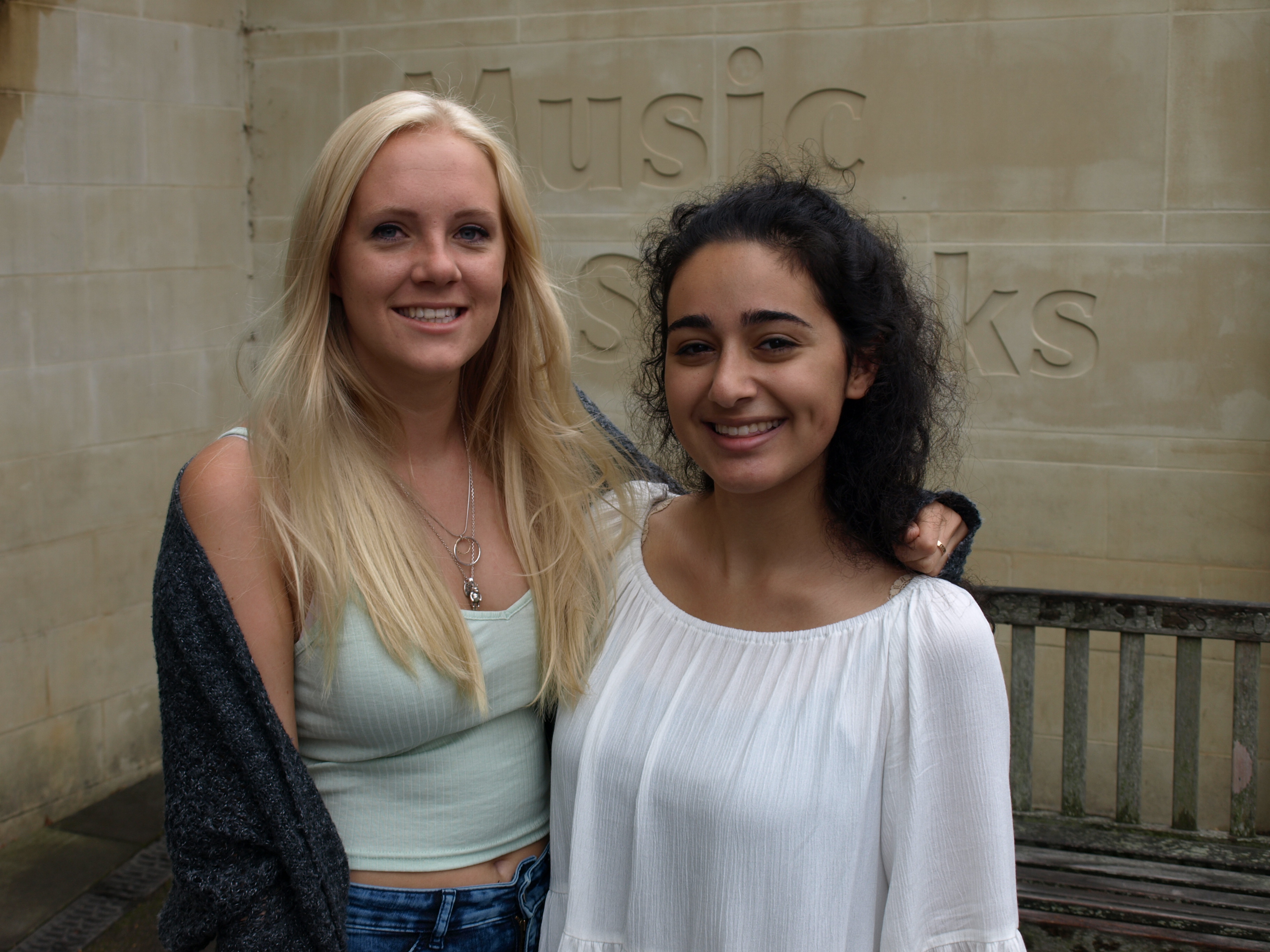 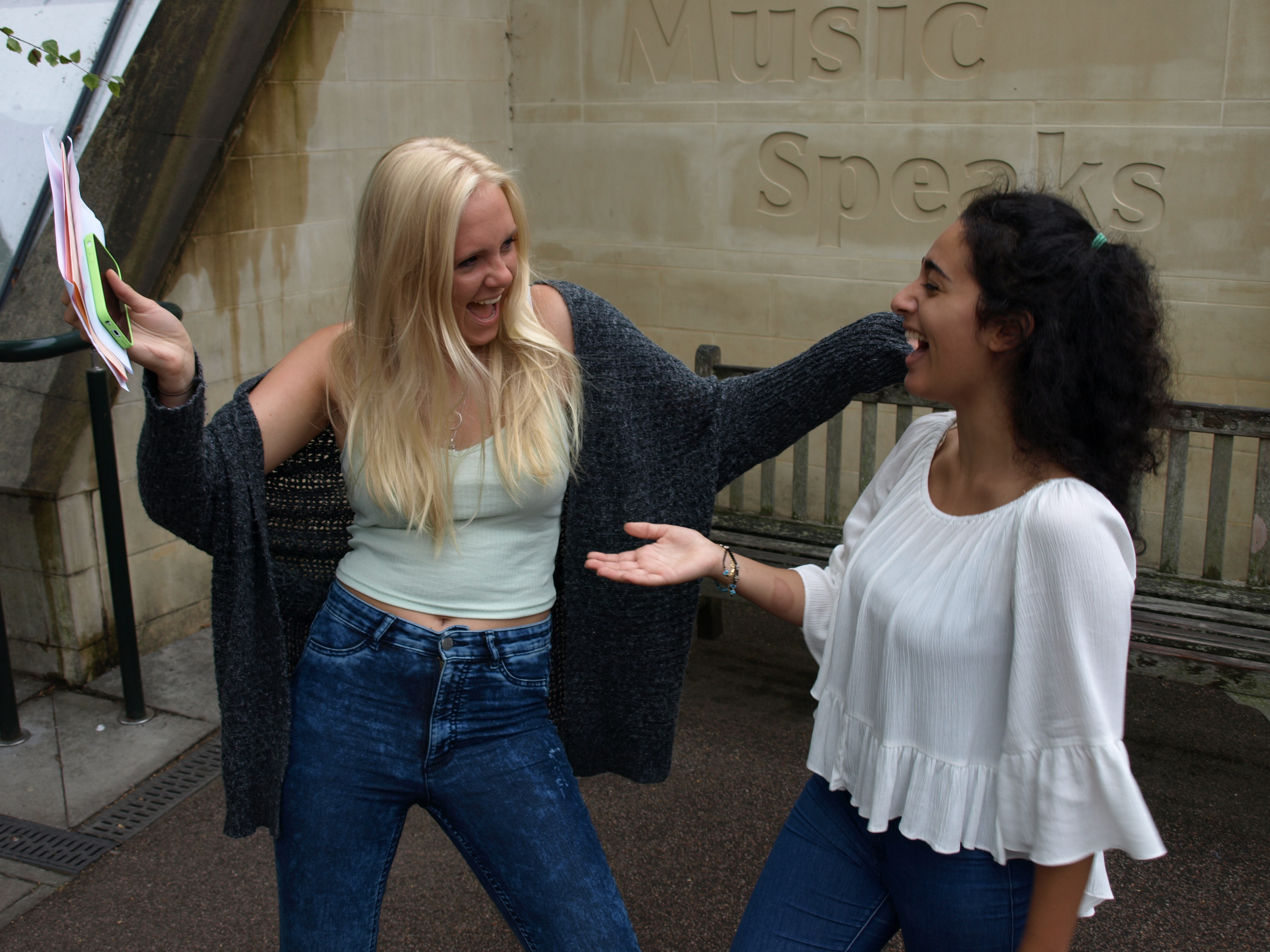 Bethan is going to study the triple threat of Philosophy, Sociology and Criminology at Lancaster.

She said: “I didn’t know what to do, but Philosophy was my best subject.

“I’m going to go out every single night – I’ve got good stamina. I’ve heard they have a club for every college.”

Layla got A*A*A in History, English and Music and is going to Bristol to study History.

“I’m psyched for Fresher’s, I’d like to say I’ll be going out every night.

“Bristol was just my vibe, the people were great and I got a good impression.

“I’ve been accepted for History but might switch to Music. I’ve spent the summer doing Music and that’s where my heart is.” 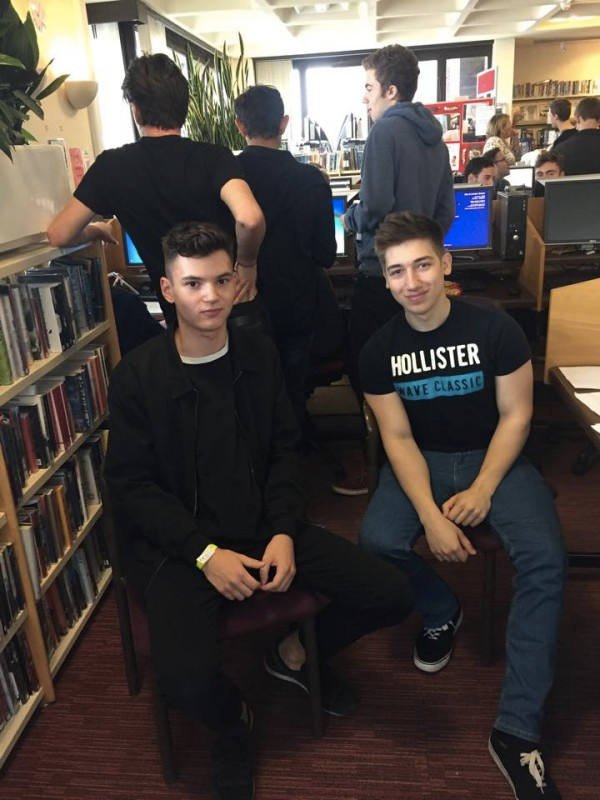 Luka (left) is off to Oxford. Nazar is going travelling

Luka got into his first choice, Oxford, to read Psychology and Linguistics and Nazar is taking a year out to travel.

Nazar said: “I’m taking this year out to travel round Australia and South East Asia and do a few re-sits.”

Luka said: “Everyone seemed very friendly at Oxford but I’m worried about burning out from too much work. My fear is to not be able to handle the work load, drop out and my parents disown me.

“I’m really excited to leave home, I’m quite independent and I like to think I can cook quite well. Well, I’d eat my food”. 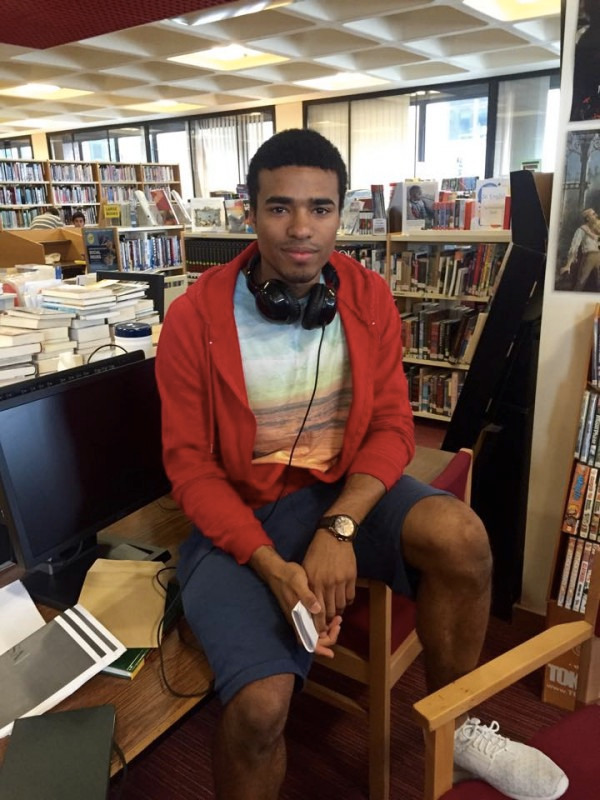 Shandon received three A*s and one A and is going to Durham to read Economics, Spanish and Arabic.

He said: “I’m definitely ready to start uni and have a change of scene from the last seven years. I’m counting on my questionable skill of cooking pasta to pull me through.

“My mum is definitely more nervous than me about leaving home but I’m really excited, freshers sounds good.

“I’m going to try and keep up during freshers and go out as much as I can but hopefully I don’t get too tired. I heard it’s not the best nightlife in Durham but with a lot of students in the town, it should be decent.” 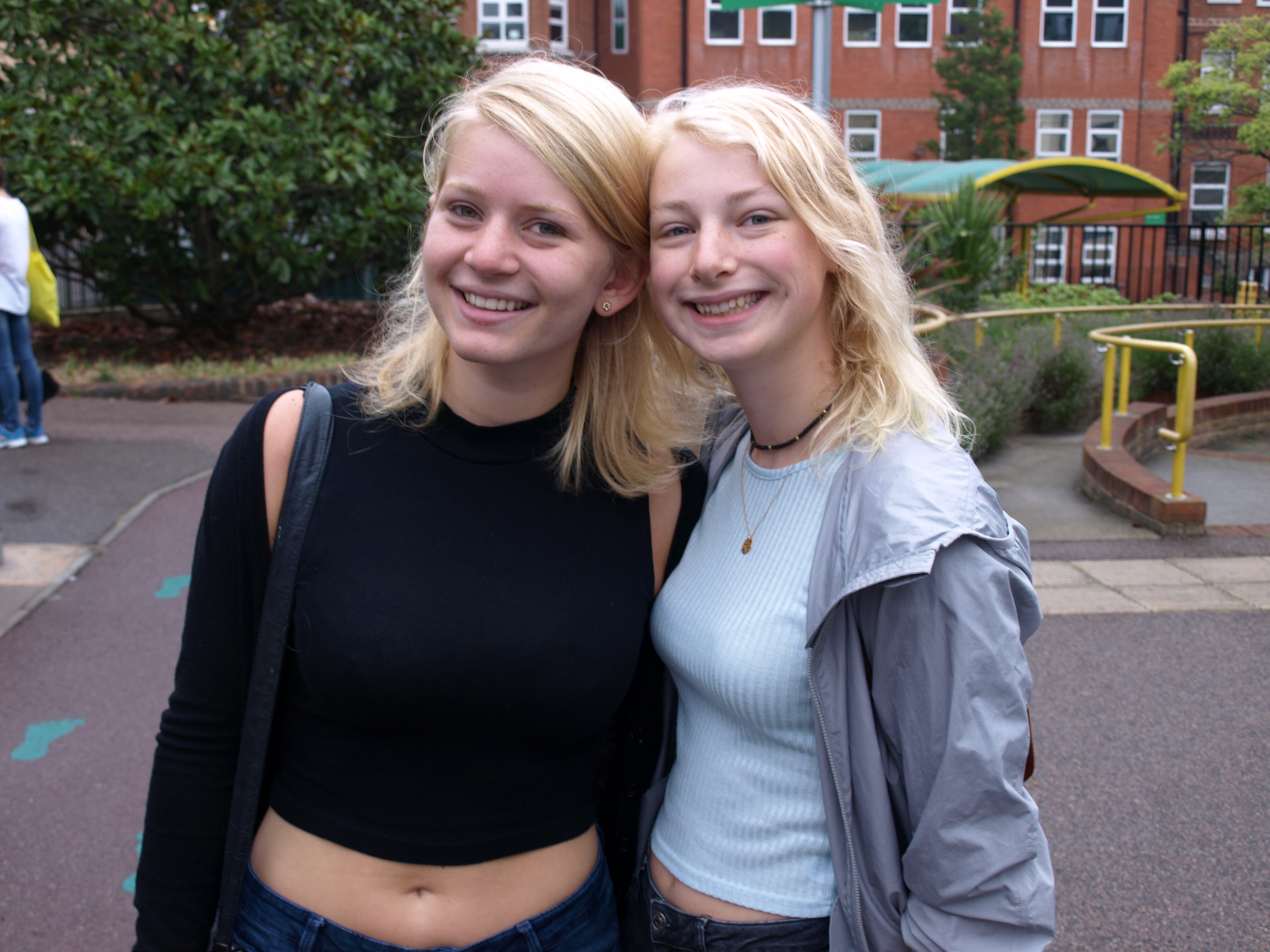 ‘I don’t think I’ll call my mum in the first week.’

Anna is going to Exeter to study Medicine after getting three As in Biology, Chemistry and Maths.

“Burger and chips will probably be my first meal. I’ll go to a pub so I don’t have to cook.

“Exeter was actually my fourth choice and all the rest rejected me, but my Aunt went there and told me it’s good.”

Emma got A*AAA and is doing Marine Biology at Southampton.

“I’ll make something nicer than just toast and if I can survive it I’ll go out five out of seven nights in freshers.”

“I don’t think I’ll call my mum in the first week.” 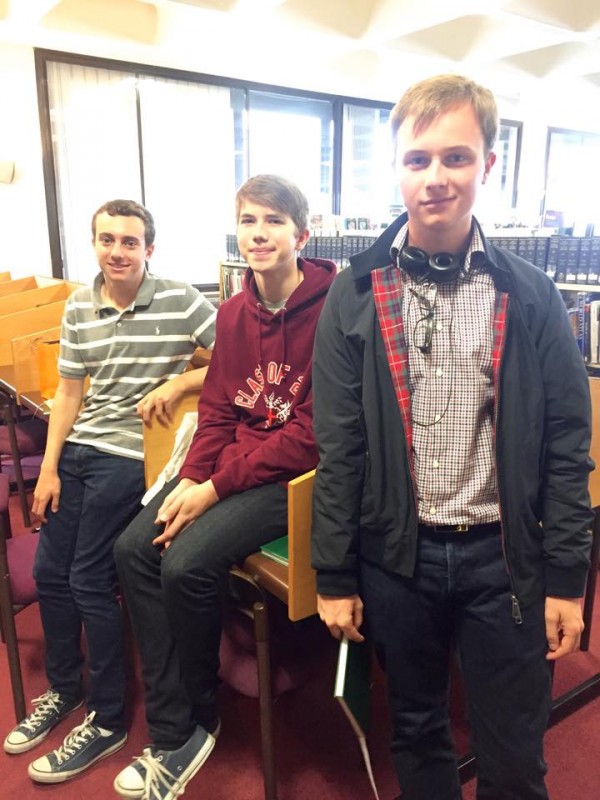 Kaz said: “We’re going to be celebrating by drinking tonight.”

Oliver said: “I’m scared everyone is going to be really pretentious. We just need to chat to loads of people but it will probably take some time to find our feet”.

Jonny and Kaz both agreed they were most nervous about writing two essays a week. Jonny said: “It just seems quite excessive.”

He added: “I’m still very dependent on my parents, I can only cook pasta, and quite badly at that. I think living alone will probably be a bit of a struggle at first.”

Kaz said “I hear the nightlife in Oxford is quite dead but I’m still excited to see what it has to offer, we might be proved wrong. We’re all really excited to start.” 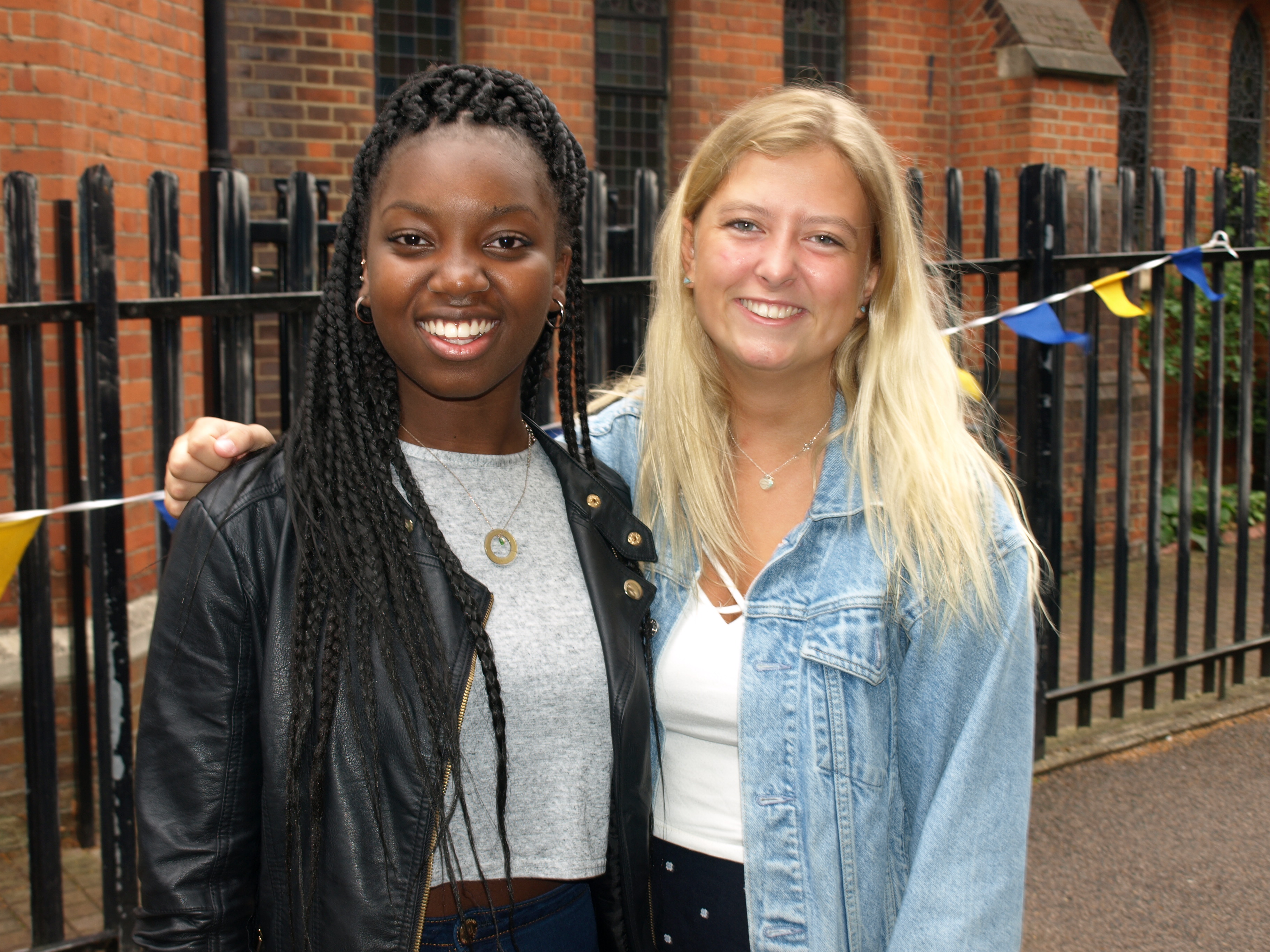 Head girl Carmen got ABB in her History, Philosophy and Economics A-levels and is going to Warwick to study History.

“What’s the most uni word I know?”

After a long pause, she said: “It has to be fresher.

“Everybody is going to Kingston Pryzm tonight.

“I’m going to go out every night in Fresher’s week.

Natalie is going to Exeter to study Drama after getting ABB in Drama, English and Philosophy.

“I loved the campus at Exeter. 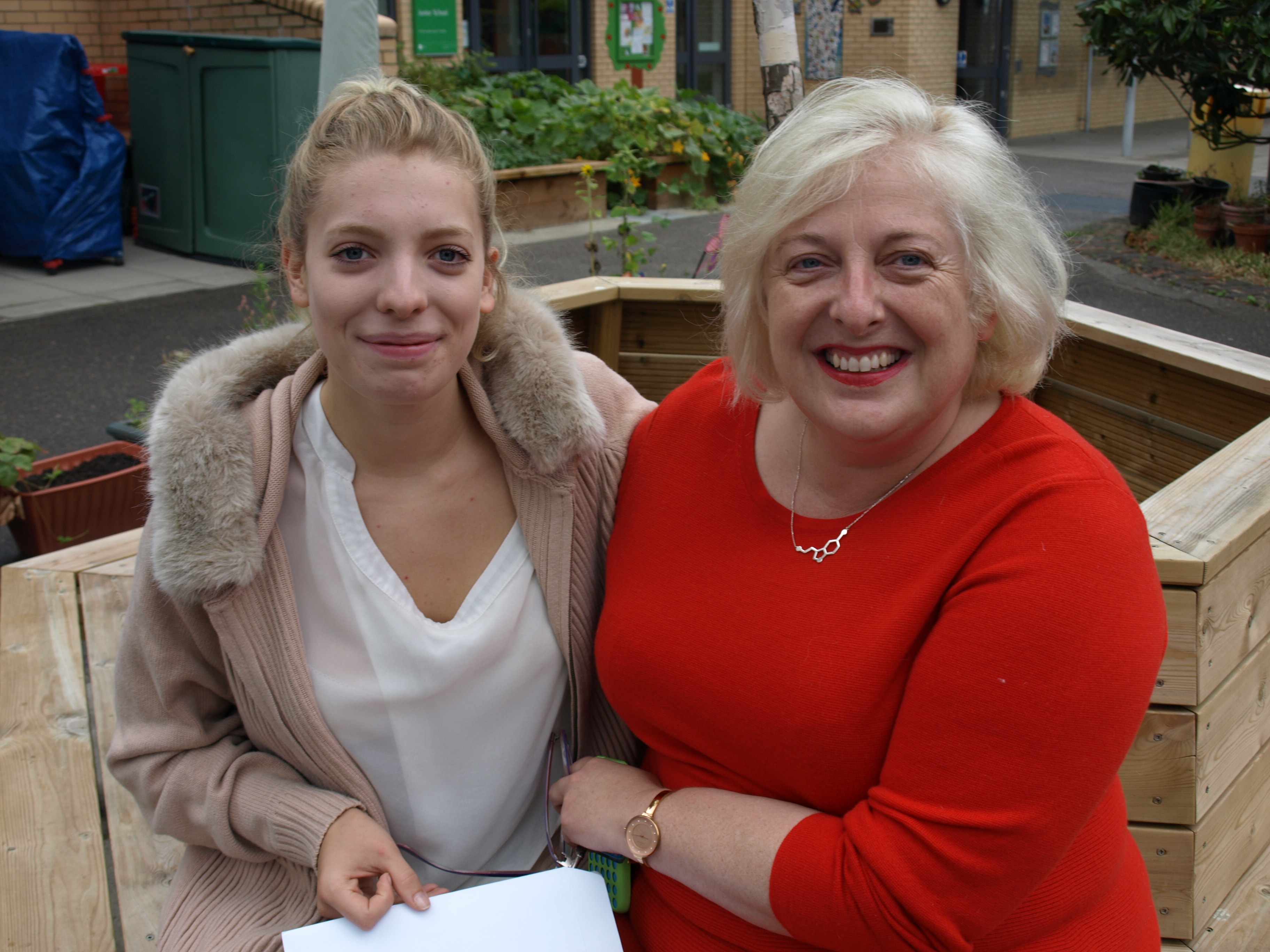 Phoebe got a massive A*AA in Biology, Chemistry and Maths and is going to Kings to study Biomedical Science.

“I’ll probably call my mum every night during Fresher’s week.

“Kings is really good and close to home too, but I’ll still be living in halls in first year.

“I needed AAB to get in so I’m really surprised at my results.” 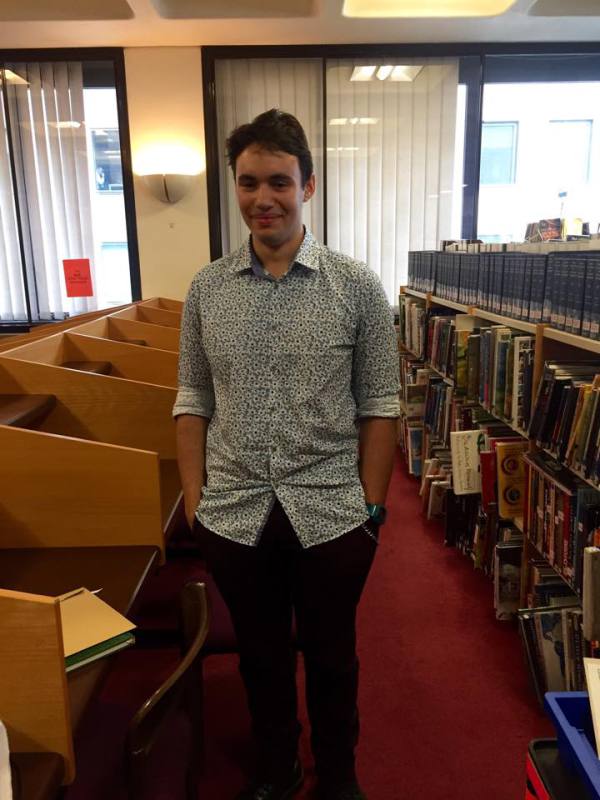 Borris received an unconditional offer to Kingston for an Art Foundation.

“I’m most excited to join the drama society during Freshers and to see what other societies there are to join.

“I’m a little apprehensive about starting but mostly excited. Art Foundations are free before you’re nineteen, so I definitely want to take this opportunity now.

“I would class myself as a very good cook. My signature dishes are my spaghetti carbonara and my thai green curry. They’re both phenomenal.” 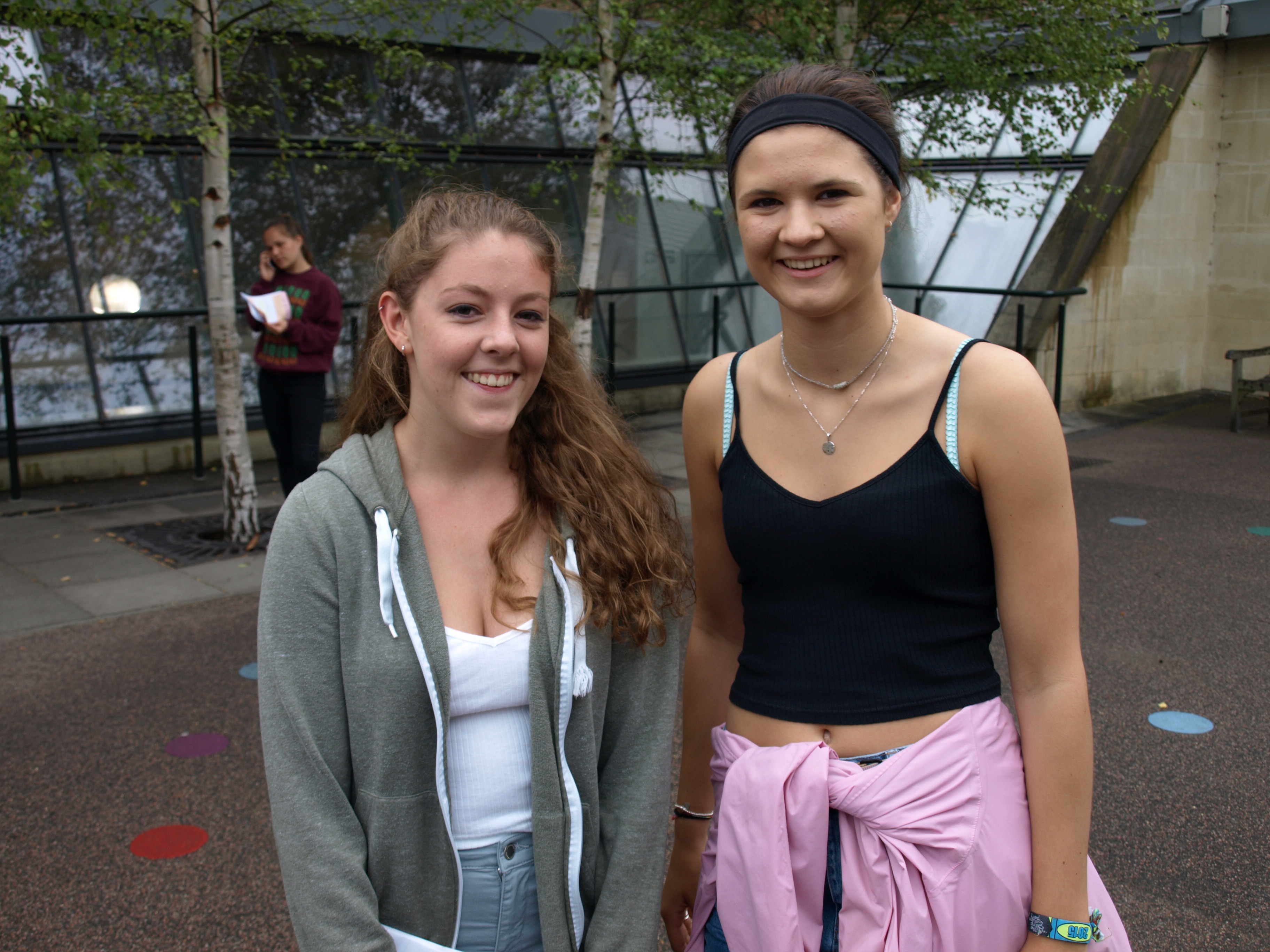 Aoefe got A*AA in English, French and Geography and is heading to Exeter to study English.

Aoefe said: “We’re all going to Pryzm in Kingston tonight.

“Fresher’s week sounds fun, I’m going to go out as much as I can.

“Exeter has a lot of hills so I don’t think I’ll wear heels there.”

Louisa got three As in Geography, Chemistry and Biology and will study Medicine at Nottingham. 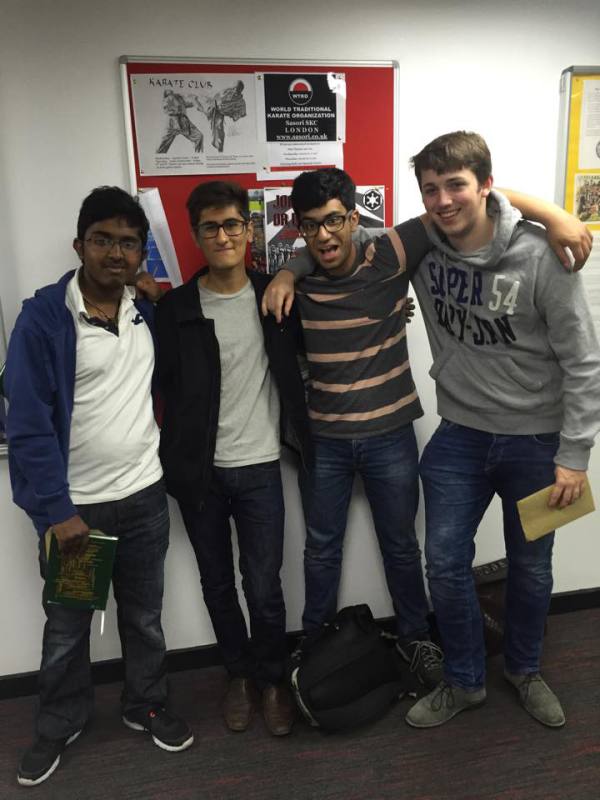 Neil rejected his offer from Imperial to study Medicine, Kyle is off to Cambridge and Ben is going to Warwick.

Neil said: “I rejected my offer from Imperial to apply for a university in America. My parents were very supportive.

“My cousins told me that third years bully freshers so obviously I’m quite nervous.”

Kyle said: “I’m also worried about cooking for myself.”

Ben added: “I’m most worried about the workload but I’m really excited for the independence and meeting new people.

“I’m not overly excited about the nightlife. Warwick is in Coventry, so pretty sure not much goes on there. It’s nothing like London”. 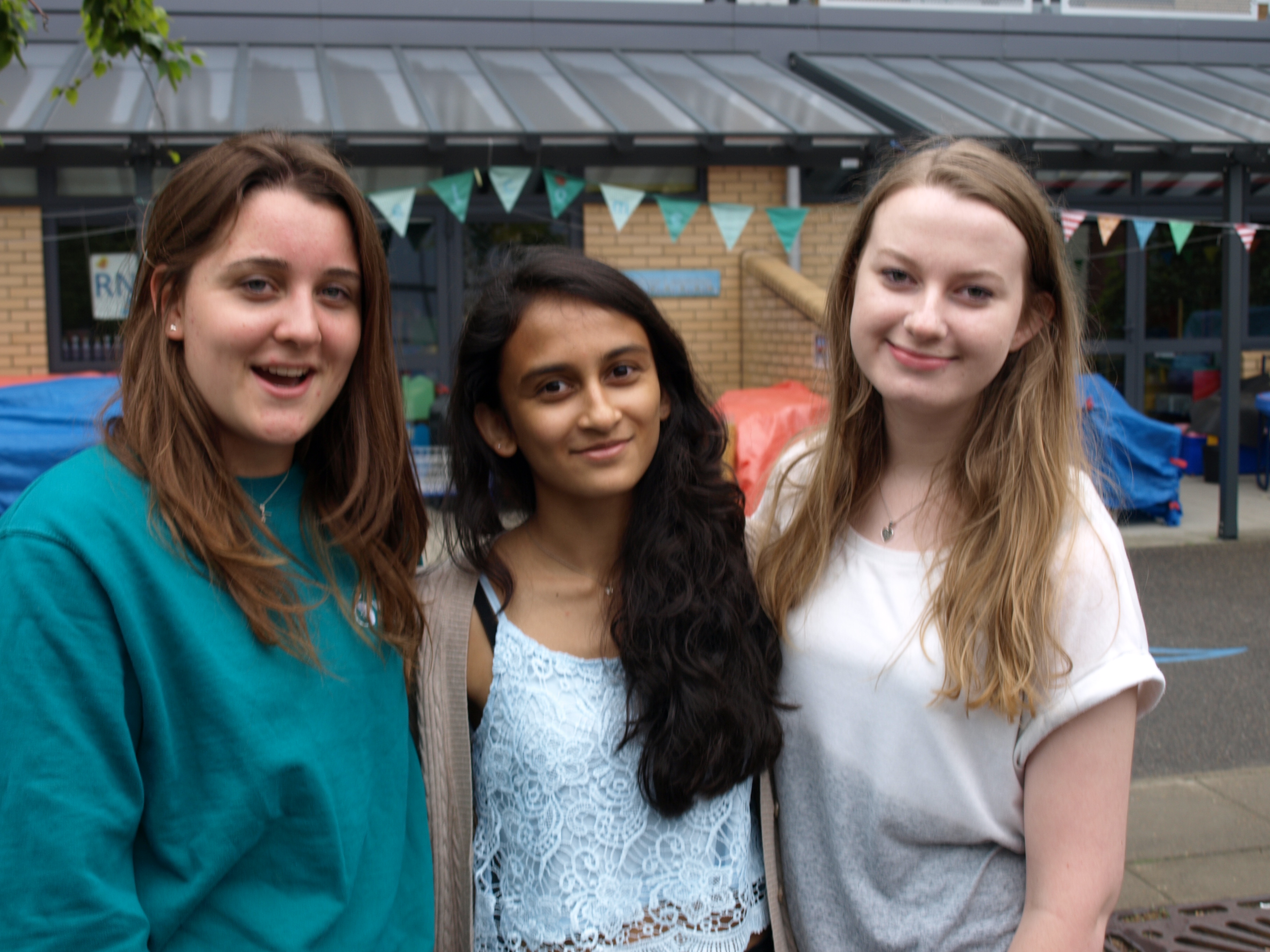 JJ, Prachy and Harriet (from left to right)

JJ is going to Exeter to study Geography. She got A*A*A doing Geography, English and History.

“I’m taking a gap year. I’m doing a ski season at the Alp d’Huez then will travel across Asia. I’m actually going to Japan by myself.”

Prachy got A*s across the board in Biology, Chemistry and German and is going to York to study Biochemistry.

“I really liked the course at York, they might let me study in German too.”

Harriet got an impressive A*A*A* in English, Geography and History and is also going to Exeter to do Geography.

“The uni had a beautiful campus so that’s why I picked it.

“I think fresher’s week will be good but I’m a bit nervous about meeting my new flatmates.” 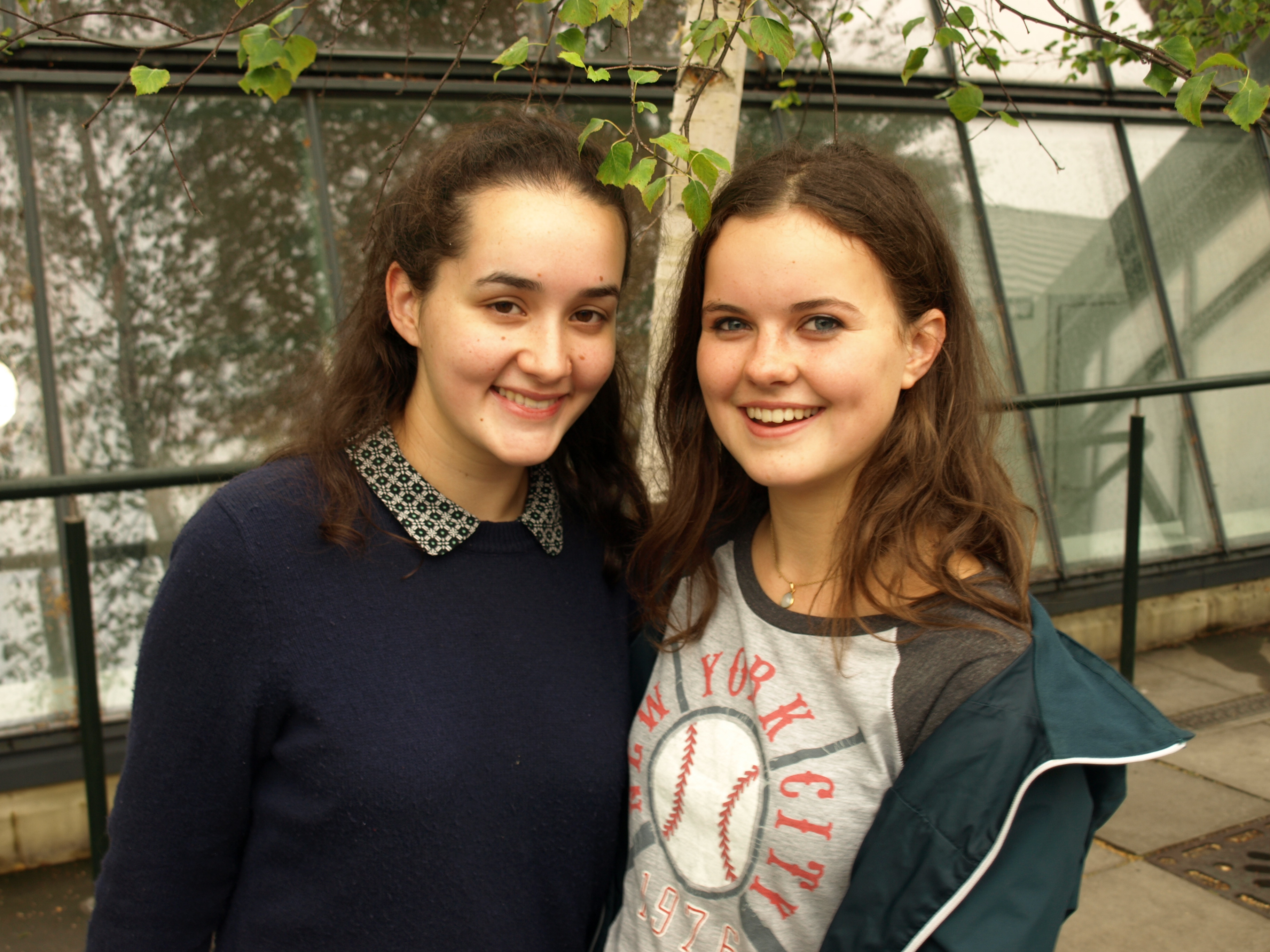 Alex (left) and Kate (right) are both going to Cambridge

Alex and Kate are both heading to Cambridge to study History, but insist they’re not going together just because they’re friends.

Alex got four A*s in History, English, Latin and Greek while Kate scored A*A*A in Maths, English and History.

Kate said: “It’s been my dream to go to Cambridge and I cried when I saw my results.” 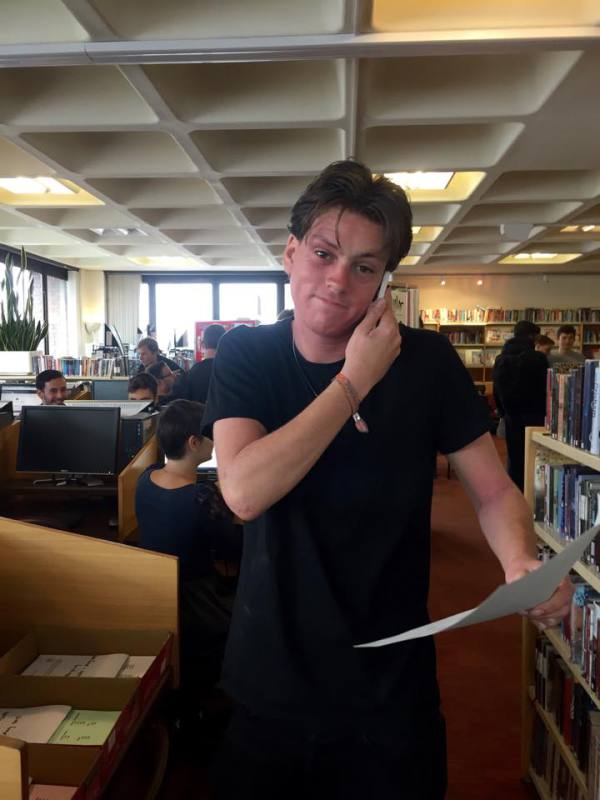 Dan is going to UCL to study Biomedical Engineering

“I hear London is a bit crap in terms of student life. It’s expensive but obviously I’m used to it from living here my whole life.

“What I do tonight really depends on whether one of my mates did well or not because he’s meant to be taking a few of us out for dinner. If he’s done badly then no idea. Let’s just hope he did well.” 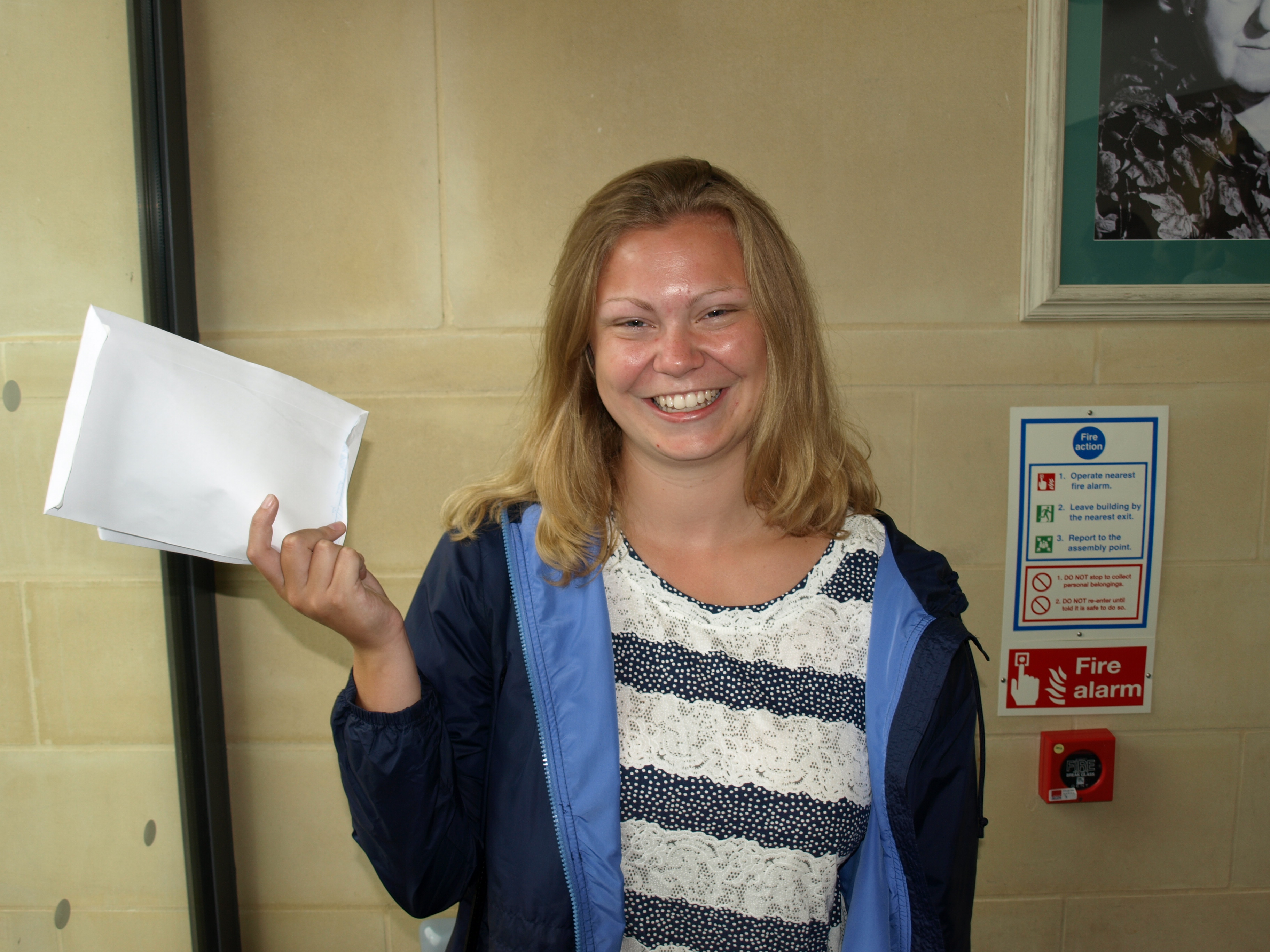 Anna got three As in History, English and Spanish and is going to Edinburgh to do History.

“I’m a bit nervous about Fresher’s because I haven’t made friends en masse for about seven years.

“I picked Edinburgh because the city is great and I have family nearby in Glasgow.” 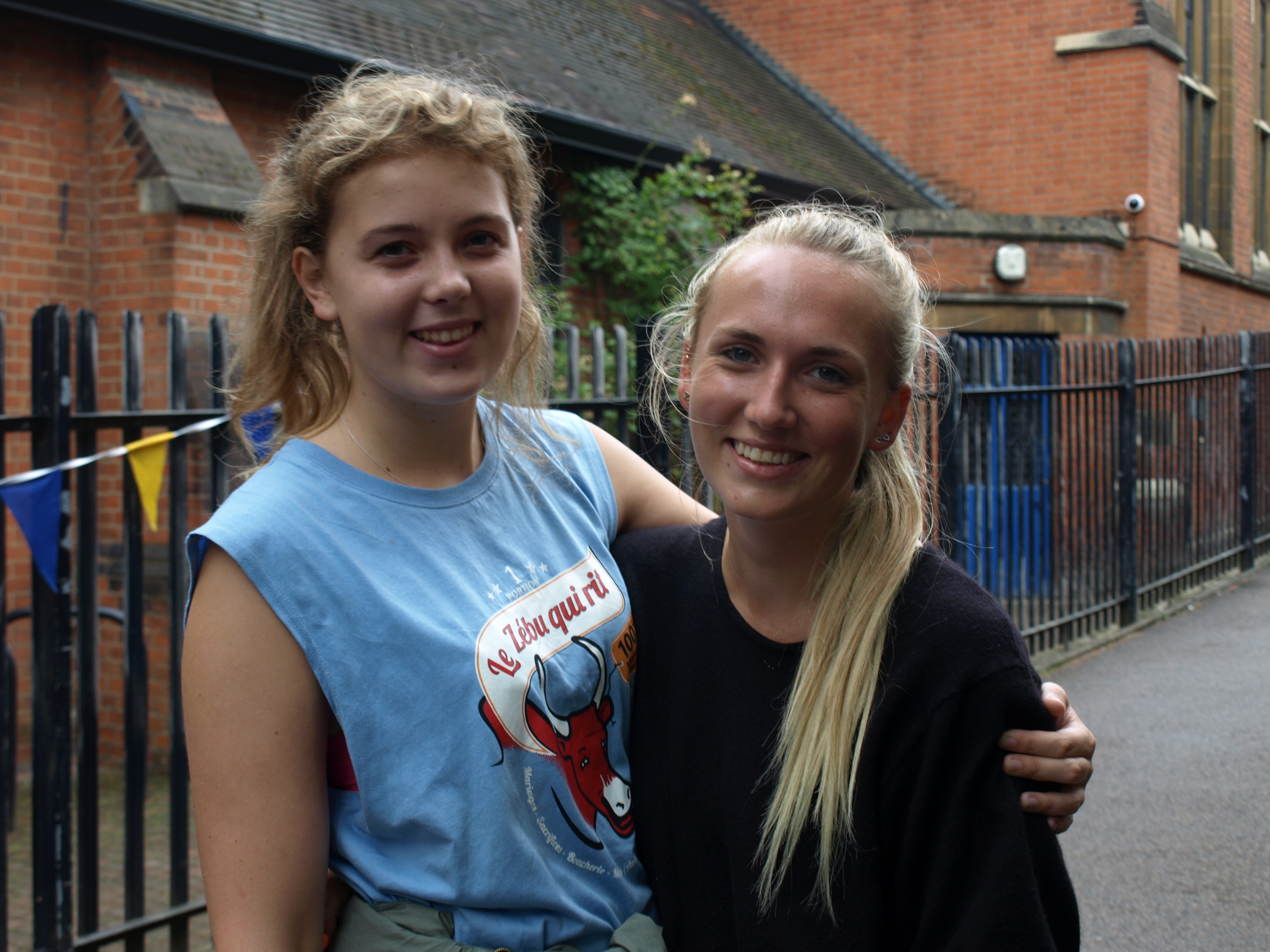 Lucy (left) and Vickie (right) are both excited for the nightlife

Lucy got AAB and will be going to Leeds to study English and Music.

“I picked the subjects because I do them out of school too.

“I’ve heard the nightlife is good in Leeds.”

Vickie bagged ABB in Psychology, Biology and Philosophy and is heading to Newcastle to do Psychology.

“I’m going for the nightlife, loads of my friends go out there – I’ve been to Tup Tup and Tiger Tiger.

“Most of us are going to Pryzm tonight but a few said they’re going to Fez in Putney.”