Binder: The app which breaks up with your other half for you

‘It’s time they got the message’

Breaking up with someone is terrible: there’s nothing worse than seeing their broken puppy-dog face looking up at you pleading you to take them back.

In an age where technology is everywhere and practically inescapable it’s surprising a break up app hasn’t already been created.

Or is it all just one big joke? Binder, meant to sound like “binned her”, was created by Edinburgh locals Ian Greenhill and Jordan Laid. The app allows fed up boyfriends or girlfriends to simply type in their other half’s name, number and reason for dumping them.

Some of the reasons include “I think I was tricked into this” and “It’s like I’m living in some sort of unwakeable nightmare”. You swipe right and it texts and calls the soon-to-be ex-partner and dumps them via a pre-recorded brutal message. Quick and easy. You don’t even need to get up off the sofa. 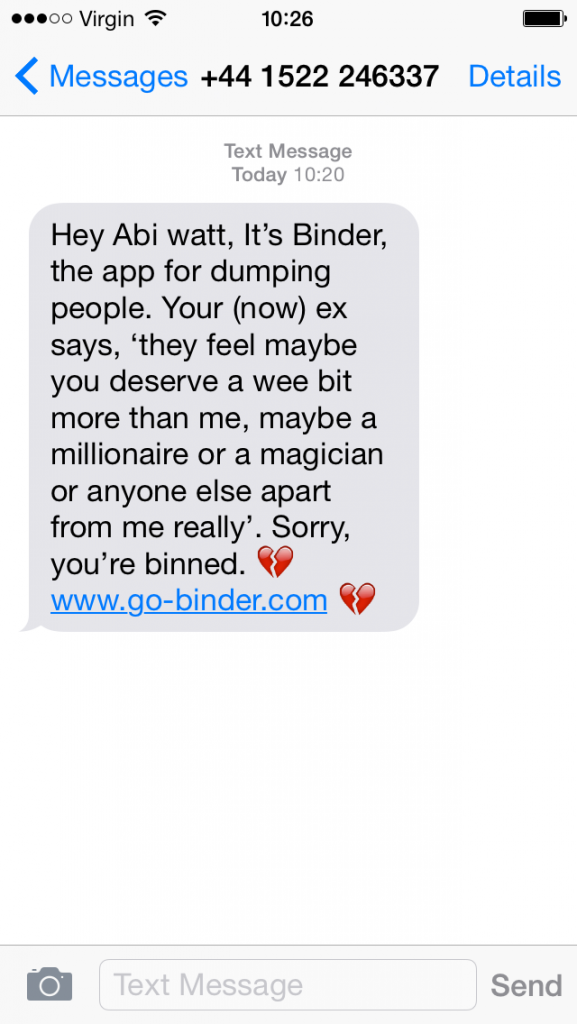 There was no doubt about it, I had to try it out on my boyfriend just to keep him on his toes. Although I had informed him I was “trying out this daft new app” he said that the message he received was “absolutely brutal and not nice at all.”

It’s fair to say he got me back when I received a phone call being “binned” which was a Scottish man singing down the phone to me saying my boyfriend was fed up of my face. 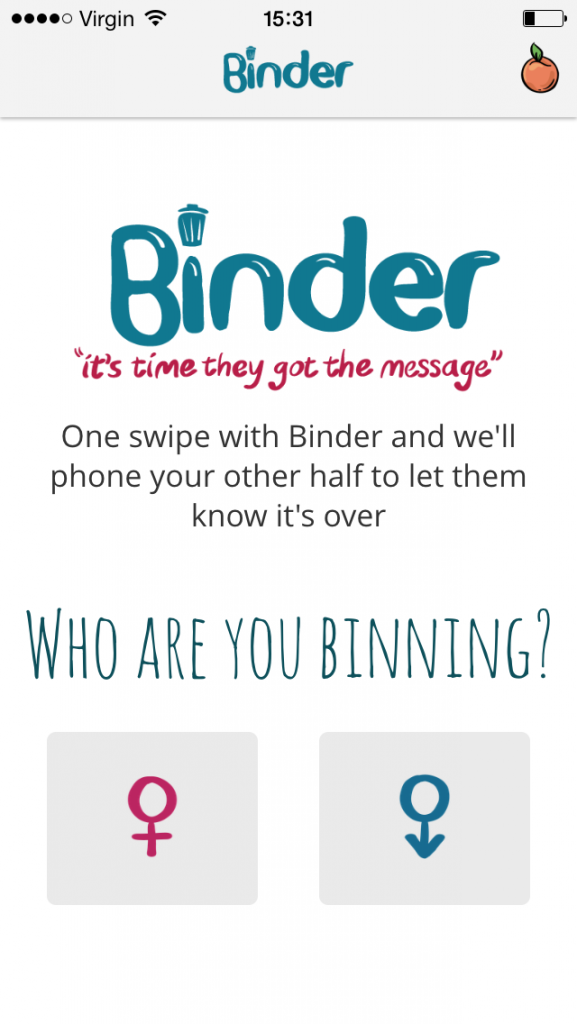 Co-founder Ian Greenhill explained how inspiration for the app came to him in the loo.

The visionary said: “We were doing stuff for Tennent’s in a big recording studio with a great team and I leave to go to the bathroom and all I hear is someone say ‘What about Binder?’ And I knew exactly what it was and that that was it.

“We didn’t see a gap in the market at all, we were throwing about ideas, we had come up with 35 animation ideas that day already.” 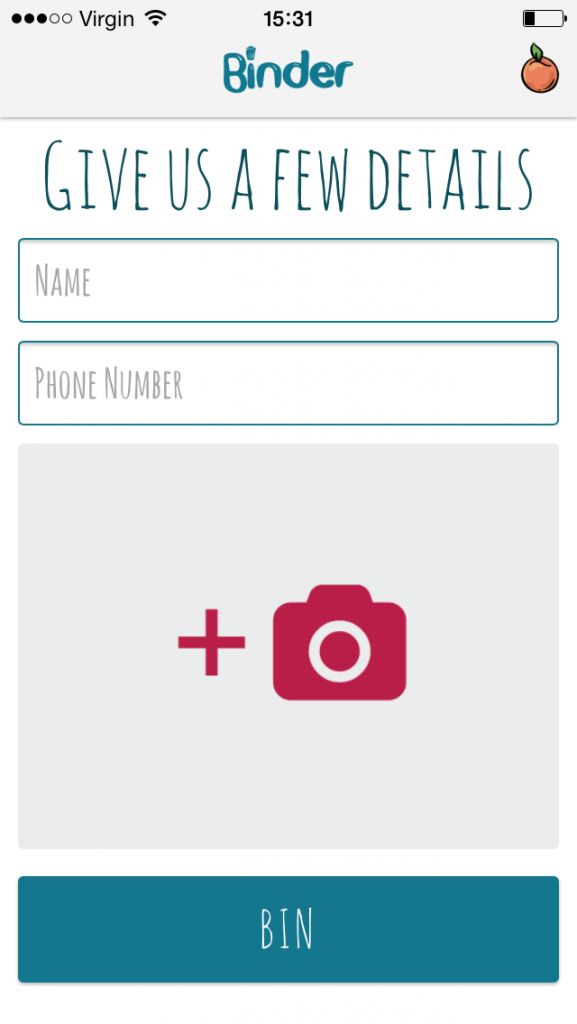 “It’s great to have Tennent’s behind us as a big company meaning they can really push the app. In 72 hours we’ve had 36,000 downloads.

“It’s so brutal and outrageous that we thought surely everyone would know it’s a big joke. I think the reason it’s been so popular is that people are keen to comment that this could be a real thing, it’s quite worrying actually.

“Anyone who actually dumps their boyfriend or girlfriend by this app is a total dick and deserves to be alone.

“I actually tested the app out on my girlfriend without telling her when it was in it’s early stages. So it called her and broke up with her but it’s my pre-recorded voice so she freaked out.” 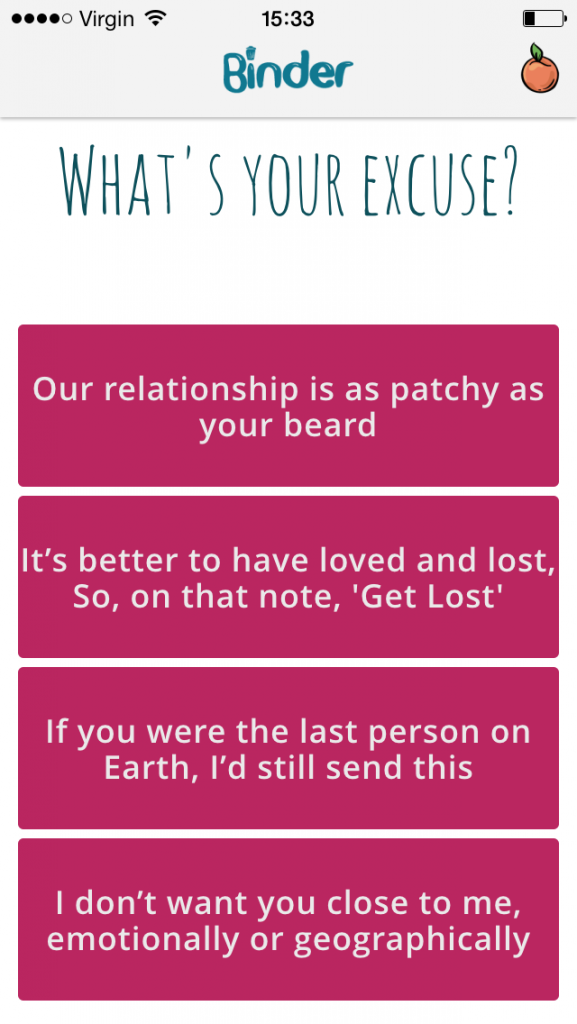 If you’re planning to break up with your significant other maybe doing it by app isn’t the best way to go about it.

We spoke to relationship expert Priscilla Sims, who said: “The best way to break up is face to face.

“There are some rare exceptions where the phone call break up is the only option such as if it’s a long term relationship or if their partner has a tendency to become violent.

“It’s better than Facebook or text. It’s important to hear your ex-partner’s voice so that they know they aren’t being horrible and that they cared about them. It shows they respected their past relationship.

“The most important part is having space to talk about things.This lets the person process and accept what’s happened. If there’s no communication there’s often no closure.”

The good news is that Tennent’s is promising to buy a pint for anyone who really, truly is dumped via the app.