‘These sites can be incredibly toxic’

Alone in her bedroom, a girl wraps two bony hands around her thigh to show how much weight she’s lost.

Another selfie flaunts the sharp edges of her emaciated ribcage: this is just one of the countless pro-anorexia Instagrams fuelling disordered eating among young people.

Now psychiatrists have warned in a recent study girls as young as 13 are being hospitalised with eating disorder, feeling social media pressure to look “perfect”.

Take a quick search and you’ll see thousands of pro-ana accounts run by lonely girls promoting a serious mental condition as a lifestyle. For years now, pro-ana (or pro-mia, for bulimia) blogs have mixed glamour snaps of skinny models, overlaid with glossy filters and stark motivation:

“For every day you binge, it will take a week longer to reach your goal weight.”

“Every time you say no to food, you say yes to thin.”

Others take body shot selfies and upload them as grim progress markers, taken in bedrooms alone, looking for attention and validation from their followers. 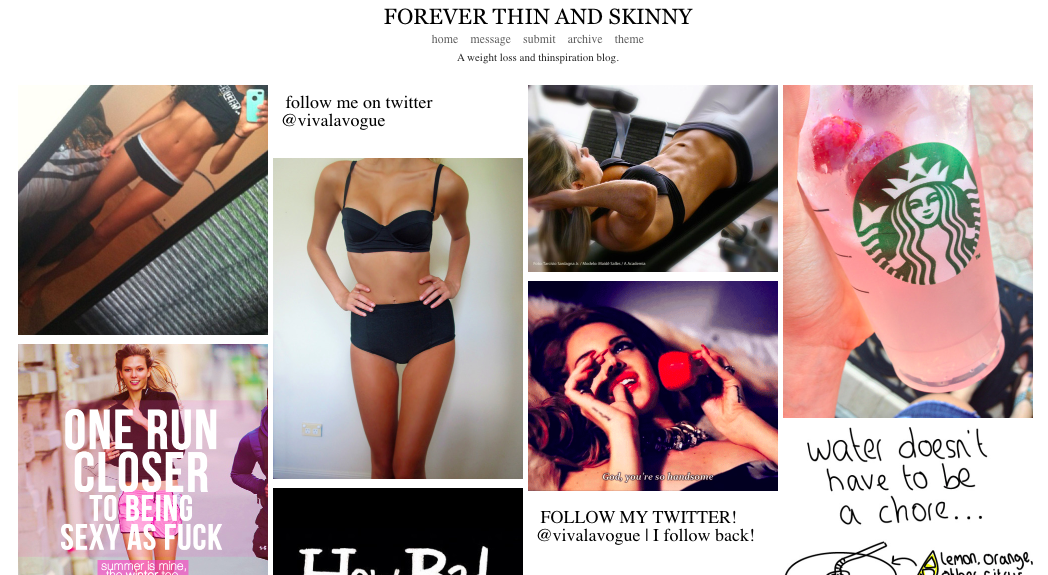 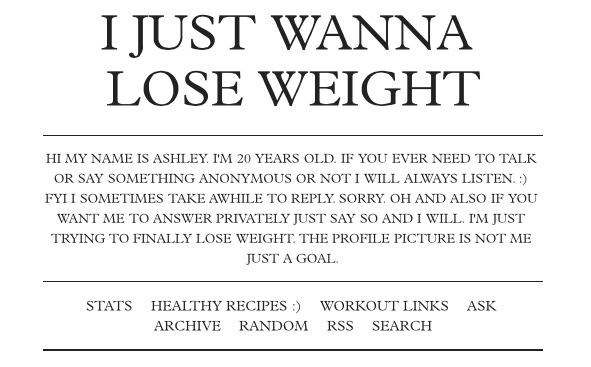 But the number of young people admitted to hospital with illnesses like anorexia and bulimia has doubled in the last three years — from 959 in 2011 to 1,815 last year.

Experts say sharing images of dream bodies online as thinspo has contributed to the “unprecedented” surge in eating disorders.

“With one click of a button very vulnerable young people are able to access 10,000 images of ‘perfect looking’ people, which places them under a lot of pressure.

“Young people who look at these images often develop body-image dissatisfaction because they’re constantly comparing themselves to these perfect images.

“This is a risk factor for disordered eating and more serious eating disorders — which can prove fatal.”

All too aware of the damage pro-ana sites can cause, recovering anorexic Alice Cachia, 21, explains how they can spur girls on to worse conditions.

Brave Alice, now in her third year doing English at UEA, battled the condition for ten years and at her smallest weight was just five and a half stone. 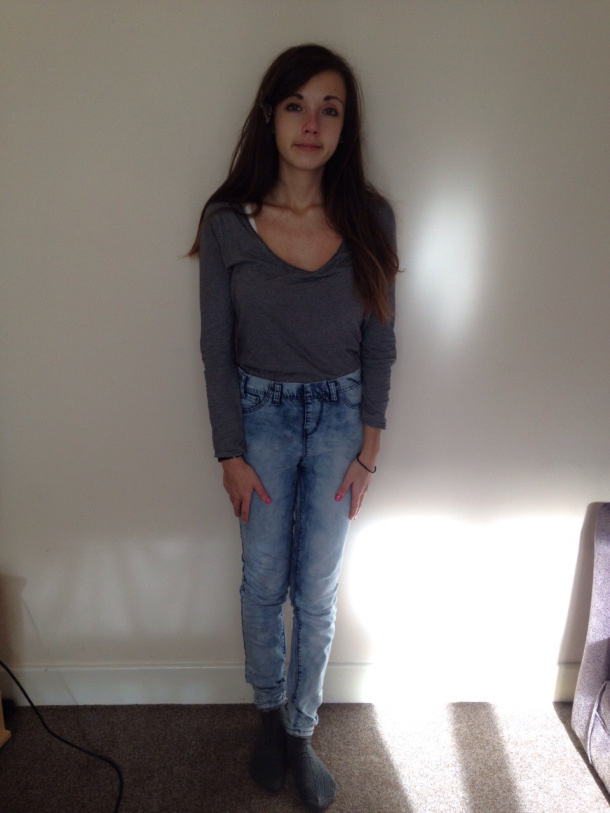 Third year Alice, doing English Lit at UEA, said: “If you want to find pro-ana blogs it’s easy to do so. It’s dangerous as well.

“They might say they don’t want to fuel eating disorders but really that’s what they’re about.

“An eating disorder is a very lonely disease. Finding support from people who are also isolated in their bedrooms with a condition, it can encourage you. It can stir you on.

“People sharing thinspo pictures will encourage you and make you think, ‘I want to be more like that so I’ll eat less’. It’s incredibly toxic.

“It becomes out of control. I never used them myself to fuel my own anorexic state but I remember doing pro-ana searches and being stunned by how many anonymous accounts there are, saying things like ‘starving myself is the only way I can be real’.” 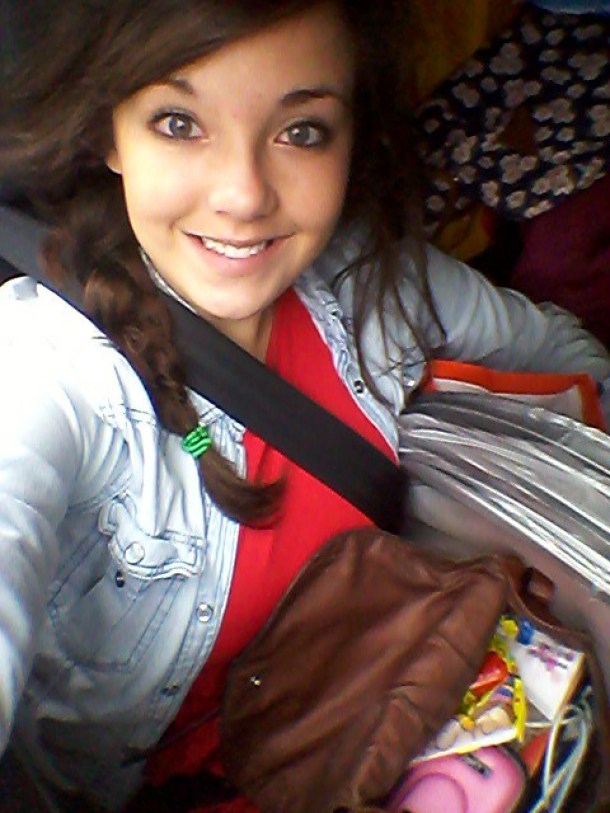 At the moment, a few search controls on Tumblr make it harder to access blogs related to words like “skinny” and “thinspo” but Alice wonders what more can be done to protect vulnerable girls.

“Why aren’t there more controls in place? If I wanted to view those pictures I would anyway, despite the access controls.

“It’s very dangerous because that community finds comfort in things that really shouldn’t be comforting. They share advice and encouragement. It does need to be addressed.

“If you want to get better, you have to go to the doctor. When I went to the doctor I wasn’t ready to make changes but I did know I wasn’t well.

“If the worst comes to the worst, delete your accounts until you can trust yourself. You have to go to a doctor.

“Recovering was the best feeling in the world. Finally finding my happiness again was incredible.”

Read about Lydia Davies, 23, who graduated from Fashion Communication at Northumbria and her experiences of pro-ana sites. 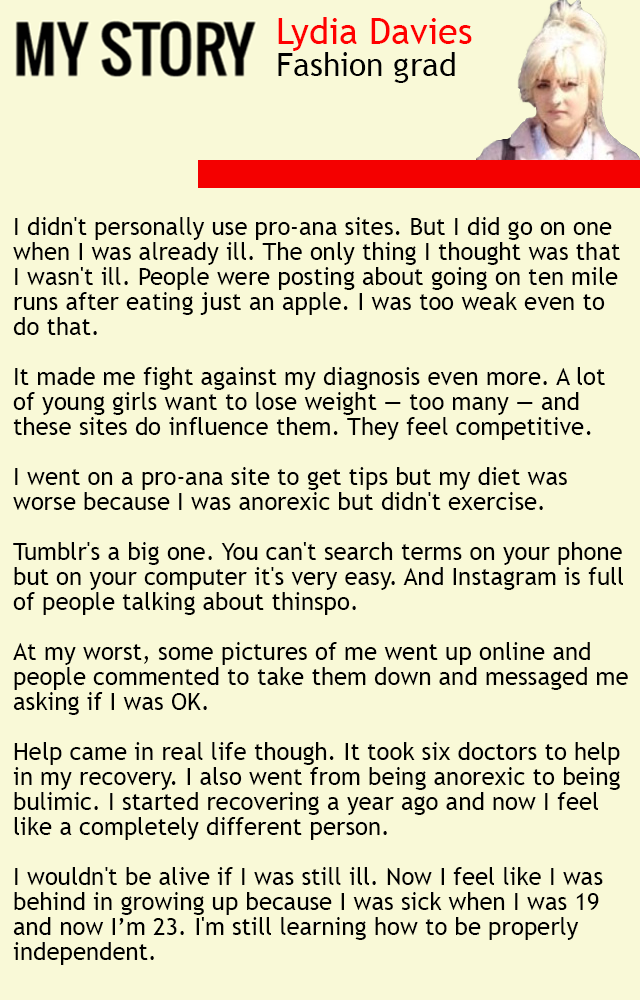