Can you get a job baring your soul behind a ‘hire me’ sign?

A horde of over 350,000 students are set to graduate this summer with a Bachelor’s just like yours. And everybody’s collectively bricking themselves.

We’re competing for all the same roles in fear of the cesspit of looming unemployment but what if there was a way to launch yourself right into a cushy London job?

If you’re feeling really desperate you could just stand on the street with an “Ask me for a CV” sign. I spent a day holding a placard across central London – but did anyone care? 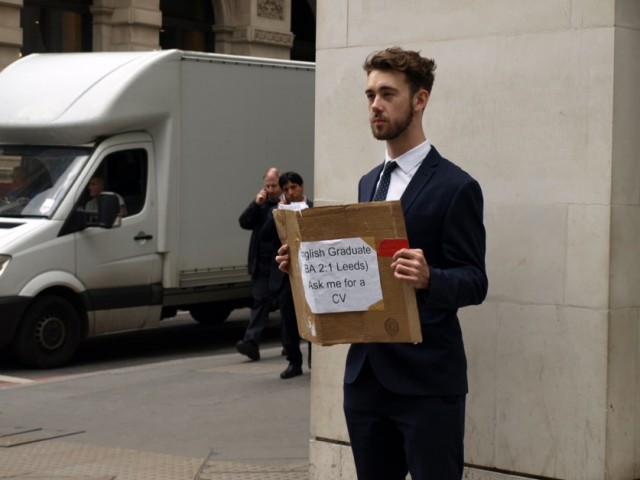 This is exactly what Coventry grad Alfred Ajani did last year, putting his career prospects and heartstrings on the line by brandishing a homemade banner. It instantly paid off and he landed a marketing role days later.

Chatting with Alfred nine months on, when the next fresh crop of grads are searching for work, he recommends Waterloo Station in Central London as the ideal job spot.

“I’ve seen a few others try it and they’ve got an essay pretty much. It’s too much to read and the font is too small – it’s got to be loud and clear.

“After the first 10 minutes people came to me. There on after, after one person comes, more begin to come to you.”

This advice from the self-styled CV man seems almost too good to be true. I’m salivating at the prospect of fast tracking a real career, just by publicly baring my soul for a few hours. 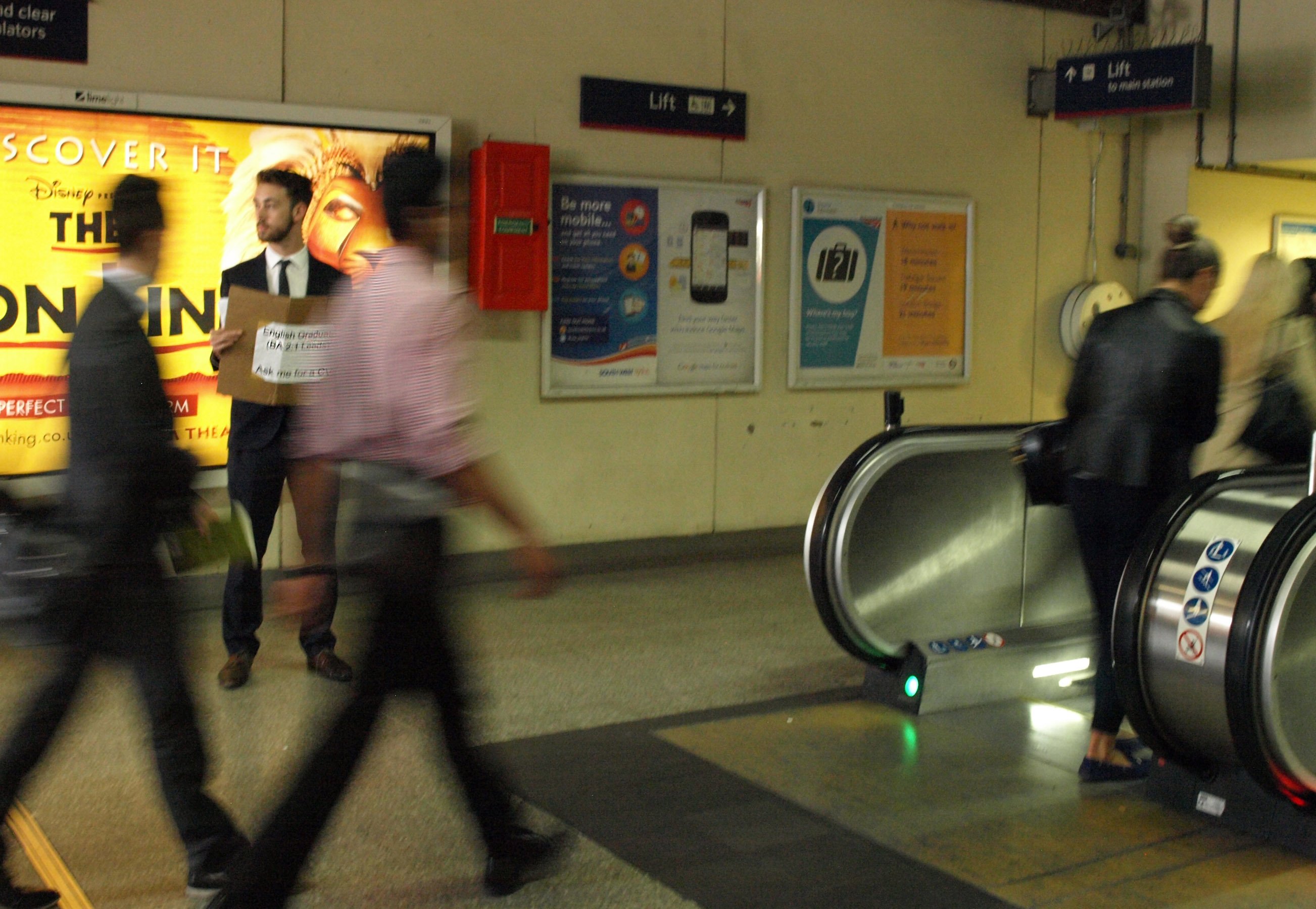 Jumping signed, sealed and suited at Alfred’s guidance, Waterloo was the first destination – but my only battle was to get potential employers to swipe a copy of my CV.

His golden rule was a strategic position next to the escalators, where you can snare those recruiters on both flanks.

Holding up the sign feels like exposing myself naked to the world. My sense of awkwardness and being out of place isn’t helped by the way people read my sign then shiftily look away.

Then there’s the casual pleasantries from passing crowds. “It’s awesome you’re doing this,” one teenager encourages. 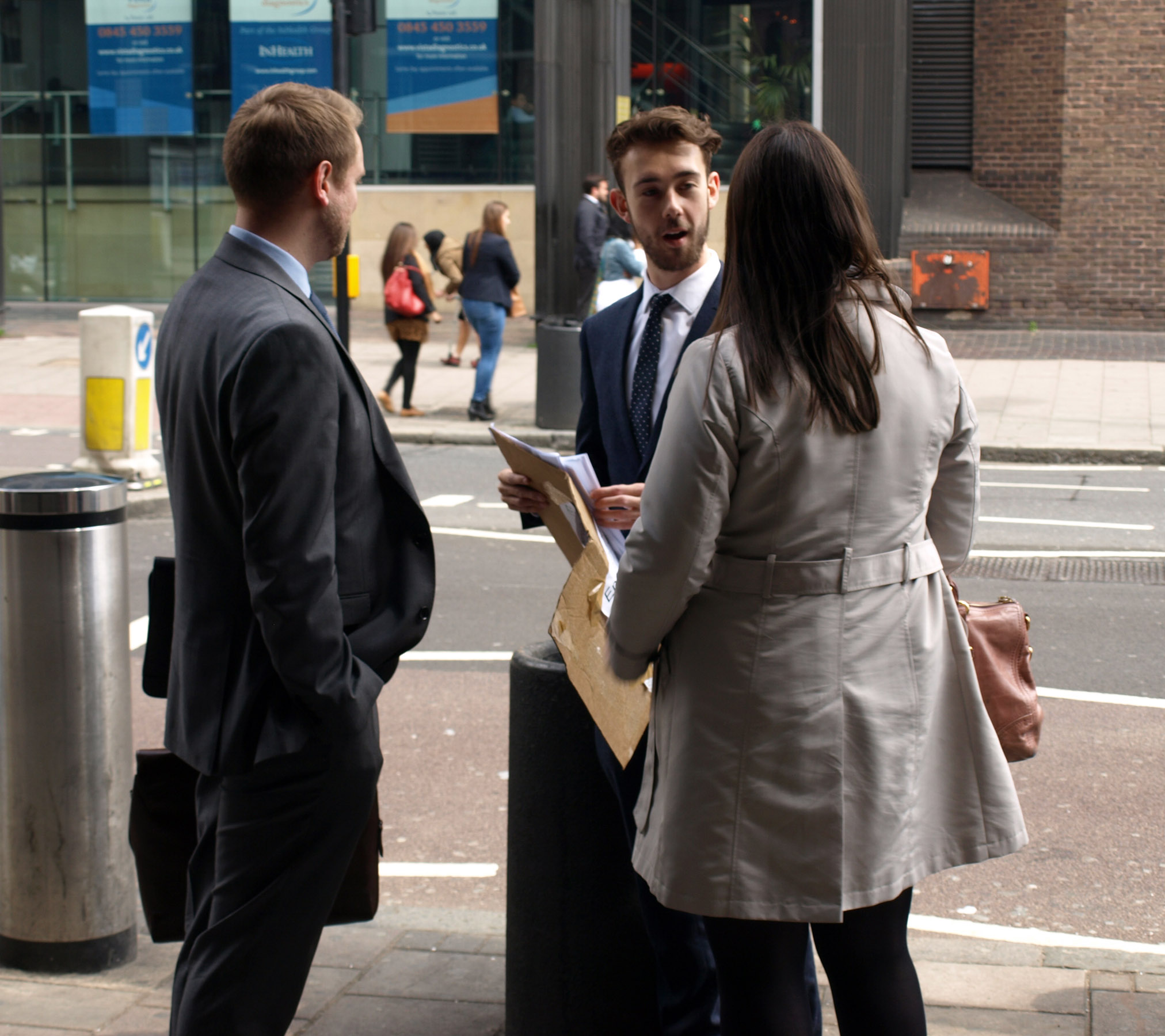 Out of nowhere an excited and suited pair charge towards me. They say this kind of spirit is exactly what they are looking for, taking a CV each and thrusting a business card into my palm. Unsurprisingly, it’s for a standard recruitment job.

It’s worth noting here, the CV I handed out was designed to mirror an average grad, blended in with a little of my own.

A 2:1 in a vague humanity (English) from a mid-market uni (Leeds) doesn’t exactly scream “Hire me” from the upper rafters of The Shard. The work experience I put down was similarly uninspiring, summer jobs and a week’s work experience here and there. 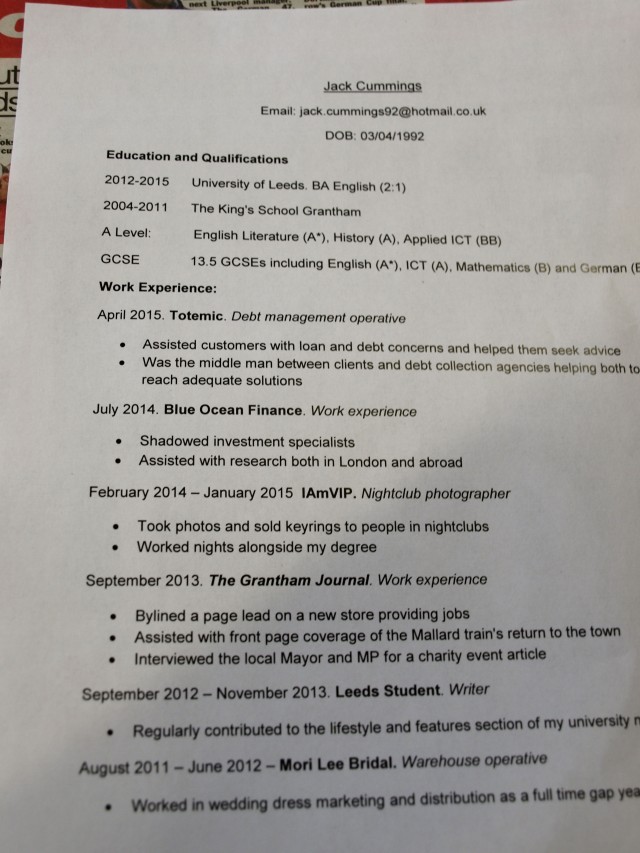 The CV I handed out. Some of this is made up

The reception at Waterloo was frosty at best, so I migrate East. No offence to recruitment, it’s just hiring people to hire other people is a strange fad. Maybe there’s a chance of working somewhere with a little more edge.

“Is he serious?” a girl giggles to her friend as they stroll past. And I am. Mostly.

A man pairing a suit and flat cap approaches me, taking a CV while enquiring “Are you any good at sales?” before shuffling off reading it aloud. 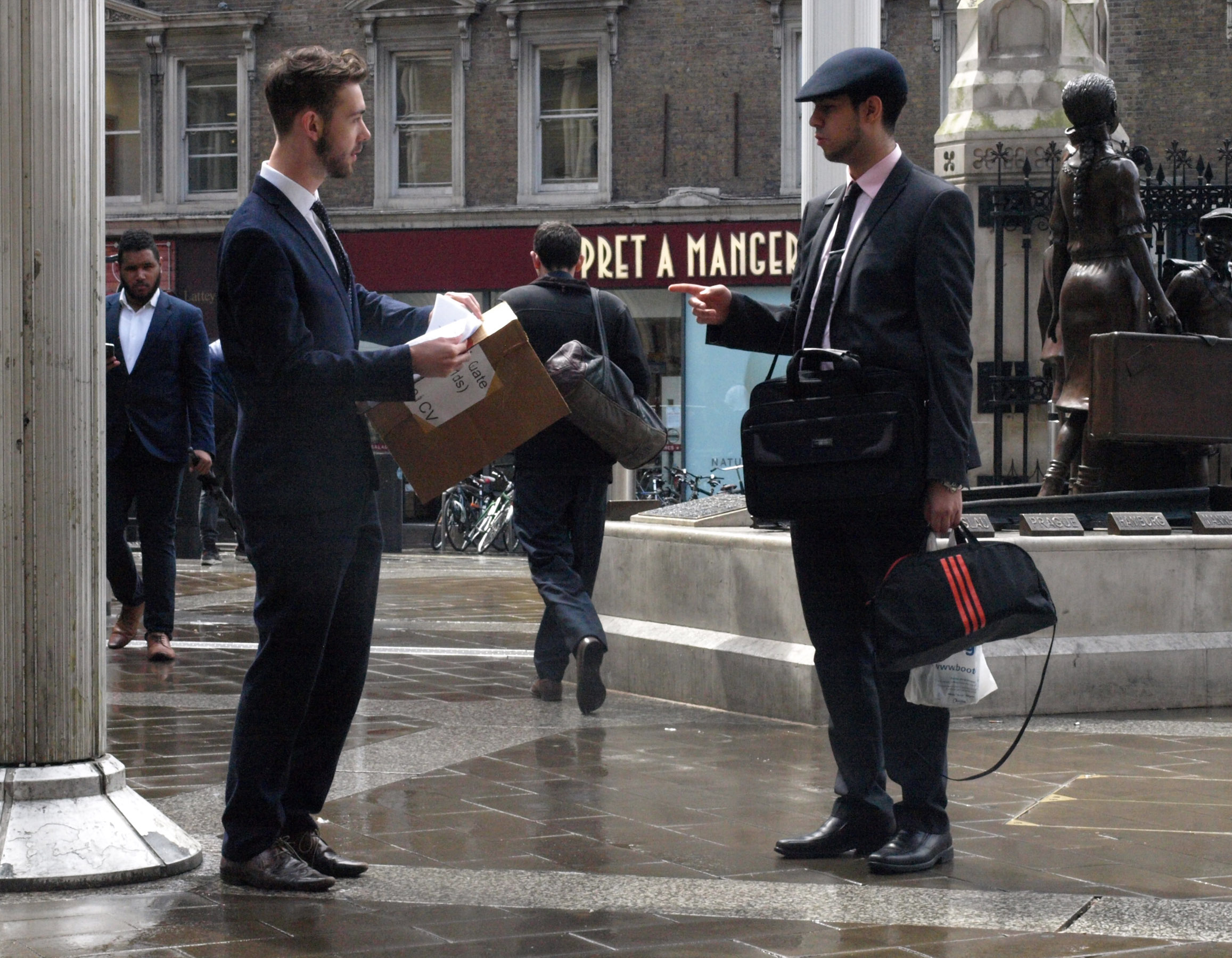 More businessmen stare, but the attitude here is warmer. I try to milk this with a sad expression, a mixture of self-pity and loathing.

Police hanging around the station glance in my direction but don’t order me to move. Not long after a Transport for London staff member marches up. I expect him to inform me begging for a job is not allowed on his property.

But he shakes my hand and seems genuinely interested, having come over to suggest I apply for the TfL grad scheme. 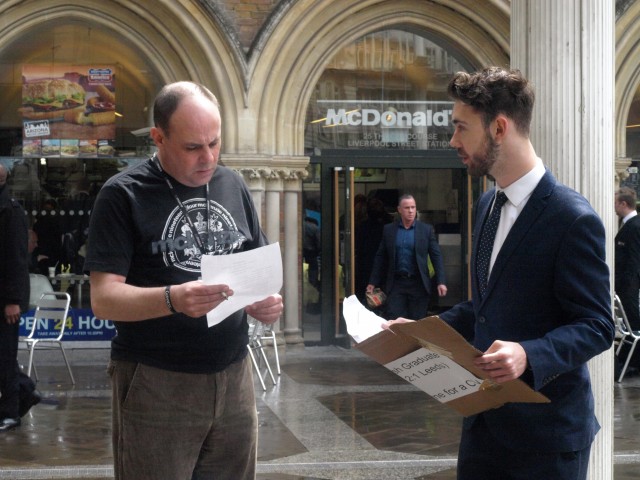 Wearing a hi-vis jacket, a man approaches me just to ask how I’m doing. His daughter is about to graduate too and he’s concerned about her job prospects.

With a big gleaming watch on his wrist a bespectacled bloke named Rory quickly takes a CV, walks off, pauses and beckons me over.

“I work for one of the biggest and best recruitment agencies in London. I like that you’re doing this, I haven’t seen it before,” he says, scrawling his number and email down on a piece of paper.

Back in the city it’s harder to catch any bites. Maybe it’s the over-saturated job market clogging my chances, so here’s the best place to have some fun.

This wouldn’t be a social experiment without messing with my potential employers just a little. I flip my sign over, to reveal an “Ask me for a Curriculum Vitie” typo.

It would be an obvious cheap shot to comment on the vocabulary of recruitment and finance workers, but surprisingly I had way more success with a dodgy sign. 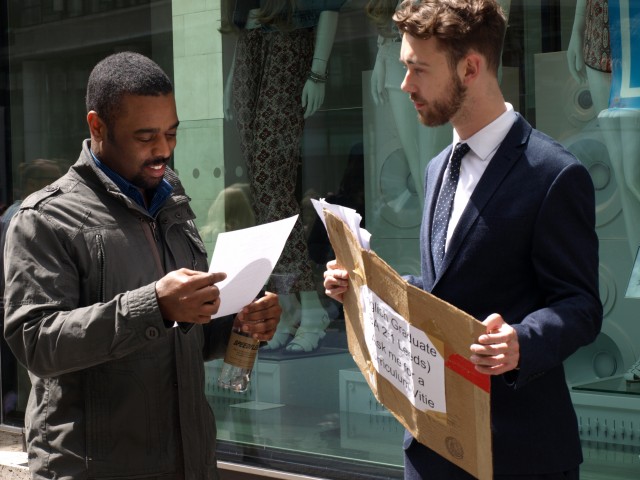 I hand CVs to risk management executives, a woman from a consultancy firm and even some guys who work for a bank.

A few times it’s obvious passers-by have picked up on my unforgivable sign mistake. But smirking to themselves or pointing it out to their friends, not a single person wants to actually tell me misspelling curriculum vitae is an employment sin. 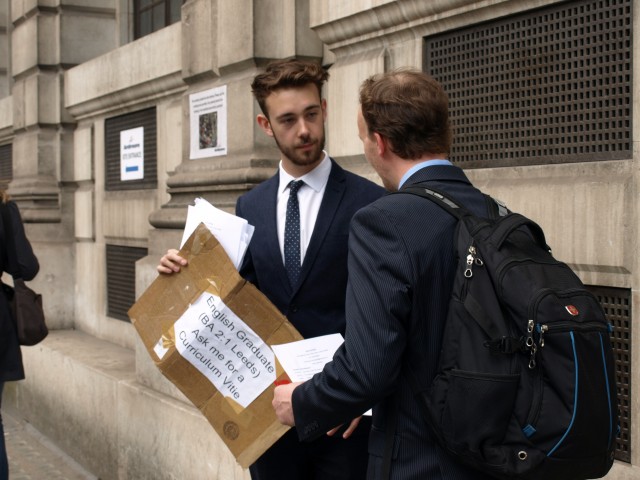 In all I received six follow up responses from the day. They range from enthusiastic chaser emails, awkward phone conversations and near-hysterical messages on my answerphone inviting me to become something called a “professional headhunter”. But I’m far too much of a pacifist to accept the last option.

One of those willing to answer my questions was Marina, who had approached me from a financial consultancy firm. She was a Leeds grad and I suspect she felt sorry for me, and was clearly able to relate to my desperate position.

Marina said: “I heard of someone doing something similar a year ago and I know where I work are constantly recruiting. So having been in the position of looking for a graduate job myself just a year ago I thought I’d help out.” 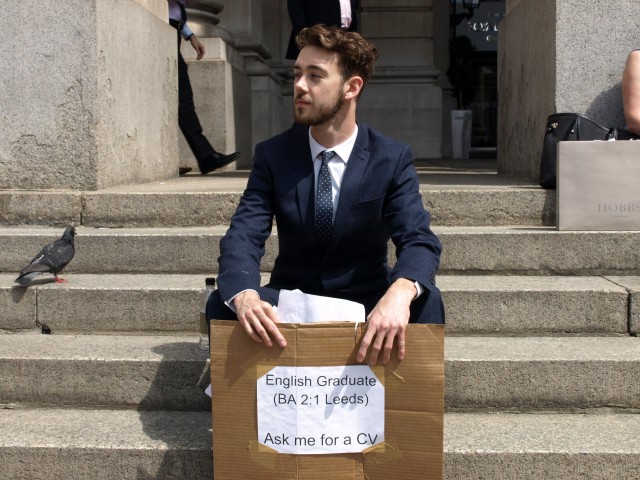 Matthew Jones, from a company named Progressive Media is a little more blunt in his response when he discovers I’m a journalist. He says he has never seen anyone holding this sort of sign before and he “thought it showed initiative”.

I think my sign and demeanor were very straight-forward and almost businesslike throughout the experience.

This was reflected in the job offers and calls to interview I received – mostly grey office work in sales and recruitment.

It might be worth adding some glitter and sparkle to the banner if you’re after something more creative, away from the soul-sucking grind.

But if you’re armed with a 2:1, an average CV and enough guts and desperation to solicit yourself on a street corner, holding a sign out will probably lead to some sort of job in the city.