The model and LiLo are pictured together once more

A lucky poly graduate who bedded Lindsay Lohan in a steamy Shag-hai romp has been reunited with her once more.

Christian Arno Williams previewed a sexy photo shoot for Homme Style Magazine on his Instagram, in which Williams is kneeling besides LiLo.

The six foot two hunk shot to fame last year after the pair hooked up during Shanghai Fashion Week, while he was still a student at Liverpool John Moores.

After Instagramming two photos of himself and former squeeze Lohan a couple of days ago, it was really great to see these two genetically blessed people being photographed together once again.

The shoot features Lohan, Williams, and two other less important models, staring inexplicably at the floor and off to the sides in what the magazine have dubbed “Renaissance”.

Christian, who has been described as “ridiculously confident, verging on arrogant”, hashtagged the photo #youcantstandwithus, making a slightly humorous reference to the film his ex is most famous for – and together the fantastic foursome seem even meaner and moodier.

He also proved models, too, can tell jokes just like us regular folk, captioning the photo: “What do you call a model with no shins … Kneel.” We’re sure he’s really proud of that one.

The ex-Hollister model, whose former co-worker previously described him to The Tab as a “bit of a knob”, met Lohan last January at Shanghai Fashion week, where apparently she fell for his mesmerizing British accent.

He may be the most successful student to ever graduate from JMU, and the 25 year old who has modelled for Versace, Abercrombie and Fitch and Men’s Health Magazine, continues to wow us.

He even finds time to read The Tab. 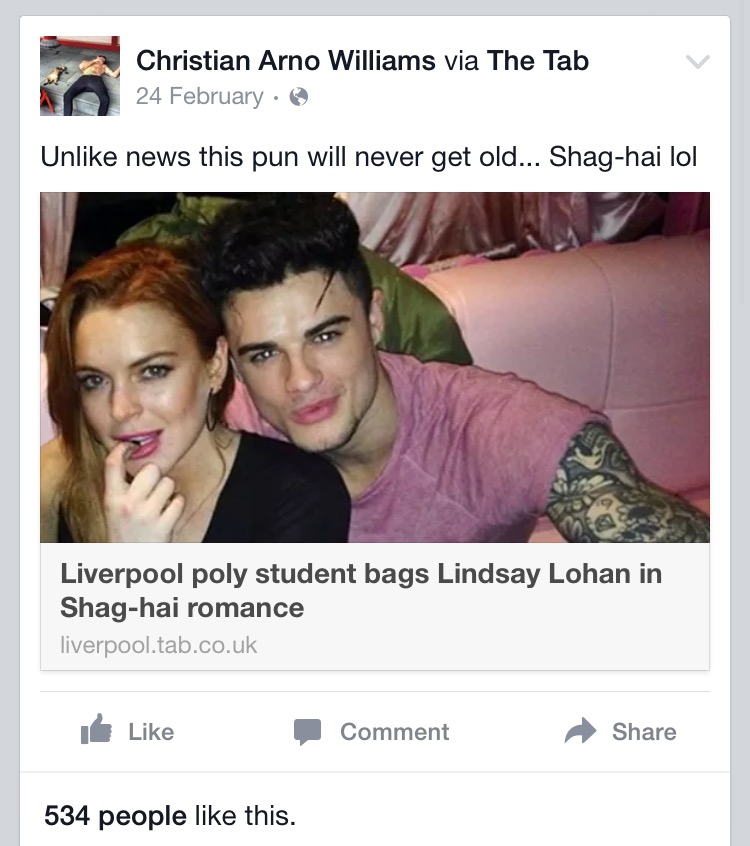 We were pretty proud of it too

When interviewed by Homme Magazine for this shoot, Lindsay Lohan was asked if it was a “good idea to date someone in show business or a different profession?”, to which she replied: “Definitely not in show business, maybe a business man”.

We do hope after this raunchy shoot the Lohan/Williams flame may be rekindled.