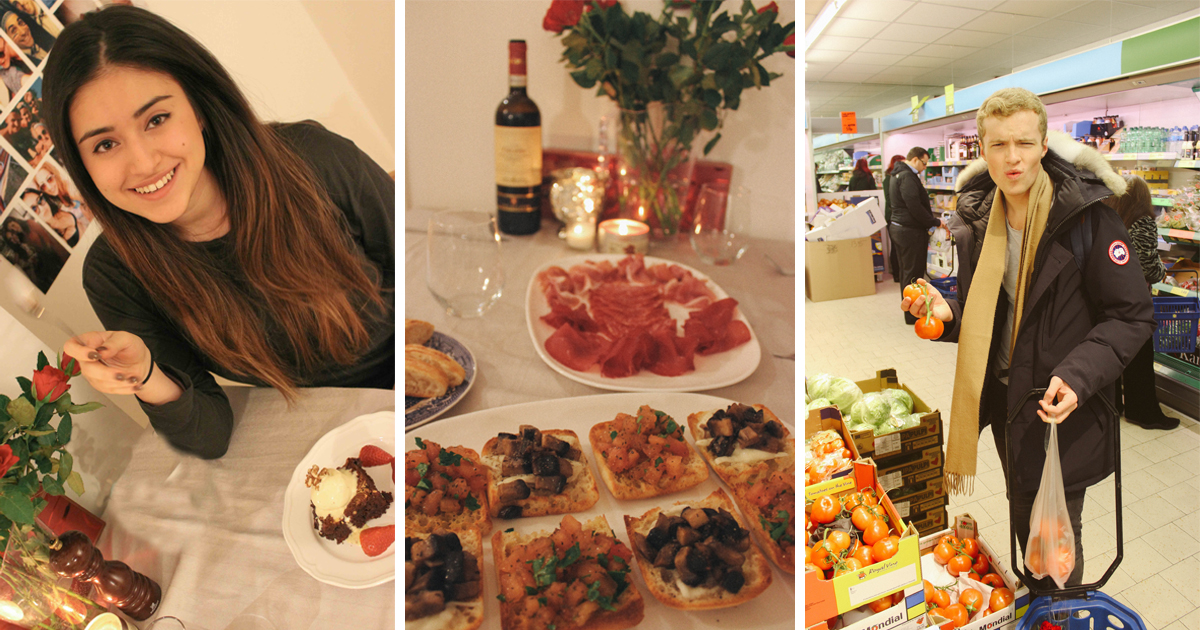 He makes the best brownies you’ve ever tasted

Valentine’s Day is notorious for being the most expensive, commercialised and cringe-inducing evening of the year, for couples and singletons alike.

But this year, The Tab has drafted in Gaz Herbert, who has been cooking his family’s Christmas dinner since the age of 7, to sort things out.

We gave him just £20 to cook a three course meal with all the trimmings. 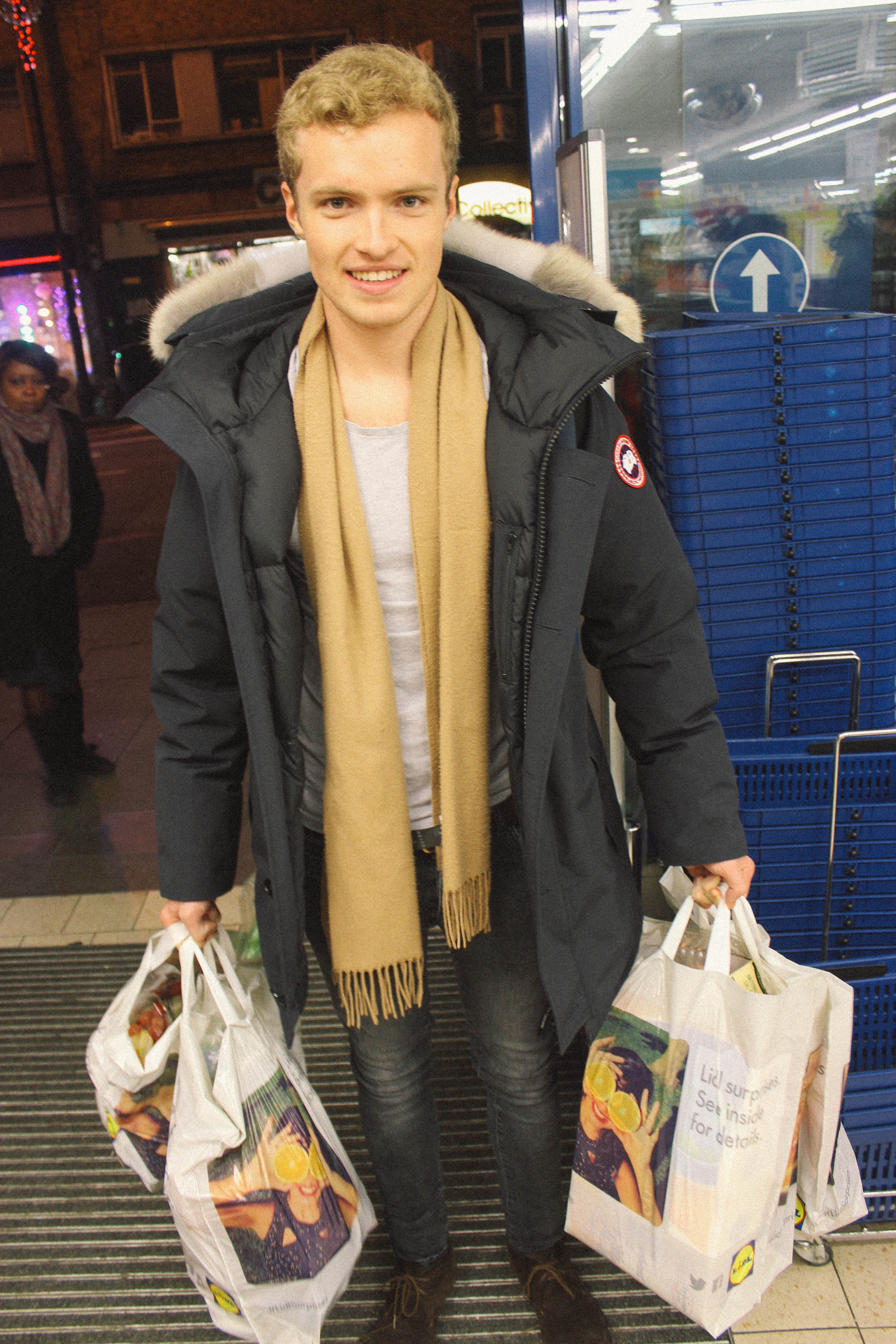 The man of the hour

He said: “Cooking at home is so much easier on Valentine’s Day. You can make it enjoyable by cooking something together and, more importantly, it’s far more impressive than just taking someone out.

“You have to book really far in advance if you want to eat out, and a last-minute trip to a McDonald’s isn’t exactly romantic – it’s just depressing.”

Gaz is studying at world leading culinary school Le Cordon Bleu London, so he really knows what he’s talking about.

He said: “There’s no need to rely on the pizza/pasta cliché. I spent £20 in Lidl and my girlfriend was insta-gramming the meal.” 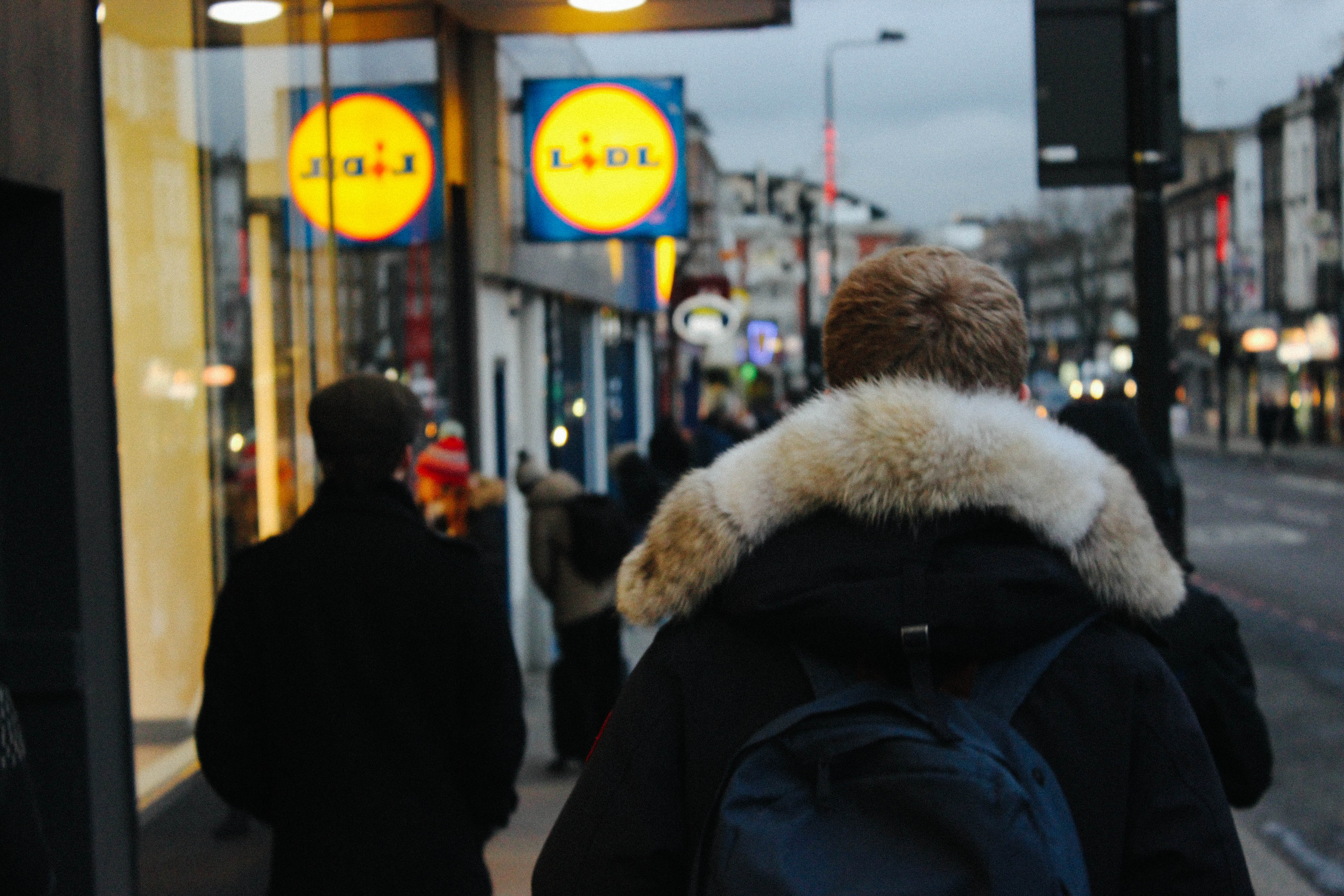 Gaz headed down to his local Lidl for inspiration

The London-based culinary student, who once filleted a fish for Michel Roux, also said lack of inspiration is no excuse to plate up for your other half.

He said: “My favourite things to cook are recipes that spring to mind when I’m doing the shopping at the supermarket, and if you need inspiration it’s easy to find great recipes online.”

Check out Gaz’s recipe for success below:

To start things off

“Slice up that fresh loaf of ciabatta and drizzle it with olive oil. Toast them in the oven for 5 mins at 180˚C.

“Chop the tomatoes roughly into small bits and chop up the basil, and mix with olive oil, salt and pepper. 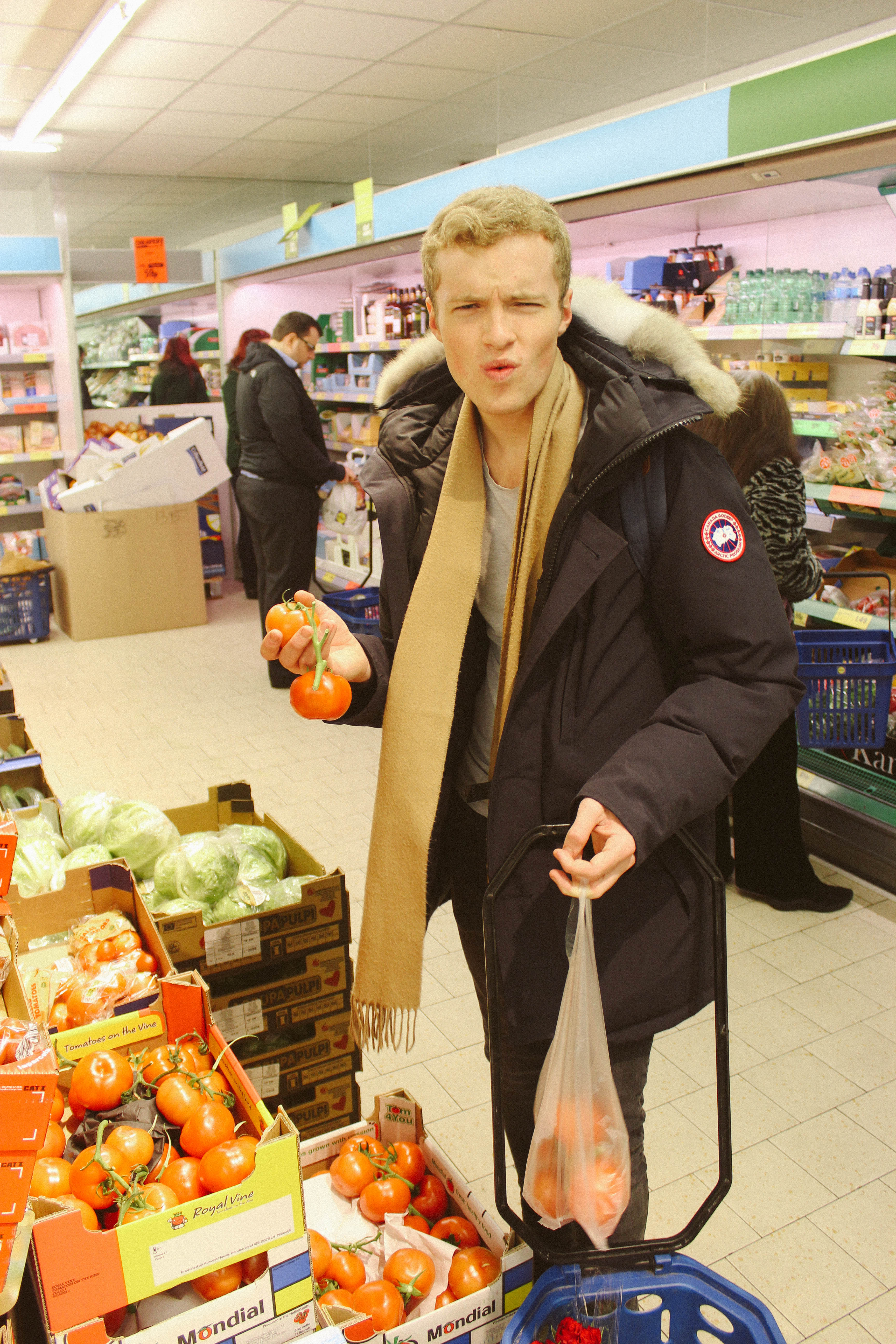 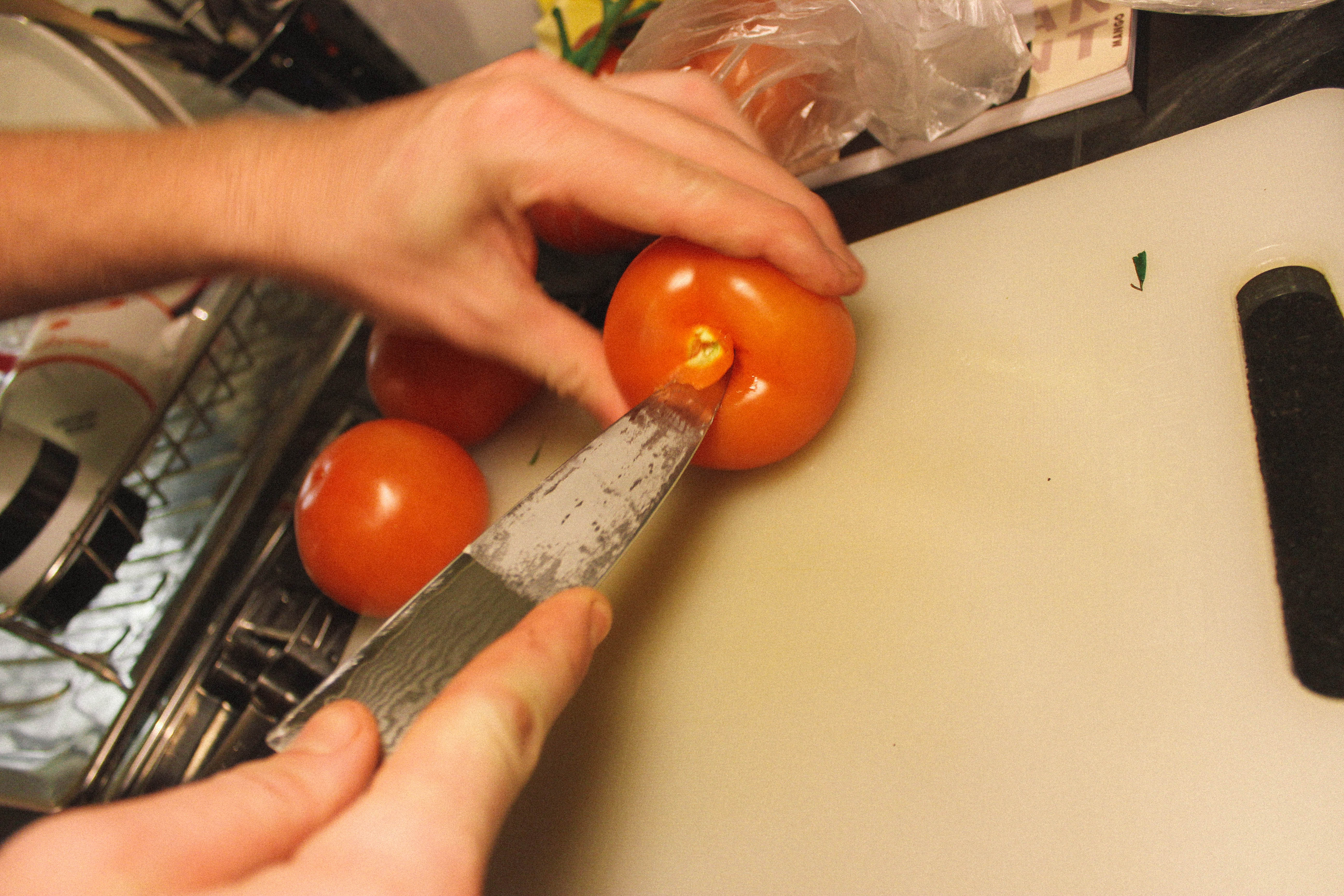 “Chop the mushrooms into cubes and fry them in a pan on a medium heat with olive oil, crushed garlic avec un pinch of our old friends salt and pepper. Cook until water is gone.

“Spoon chopped tomatoes mix on top of half the toasted slices and on the other half mozzarella and mushrooms – which you can grill if you are that way inclined. 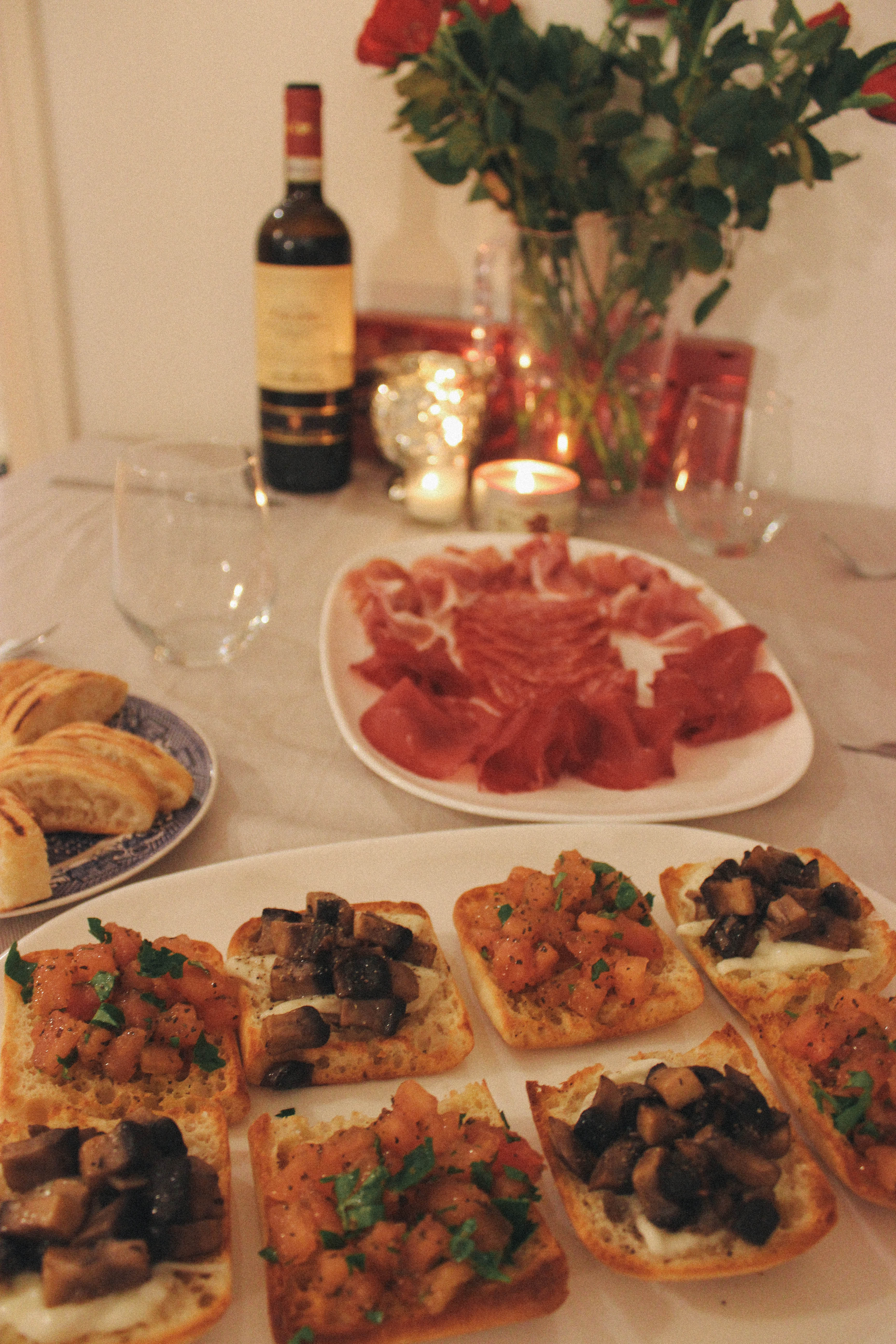 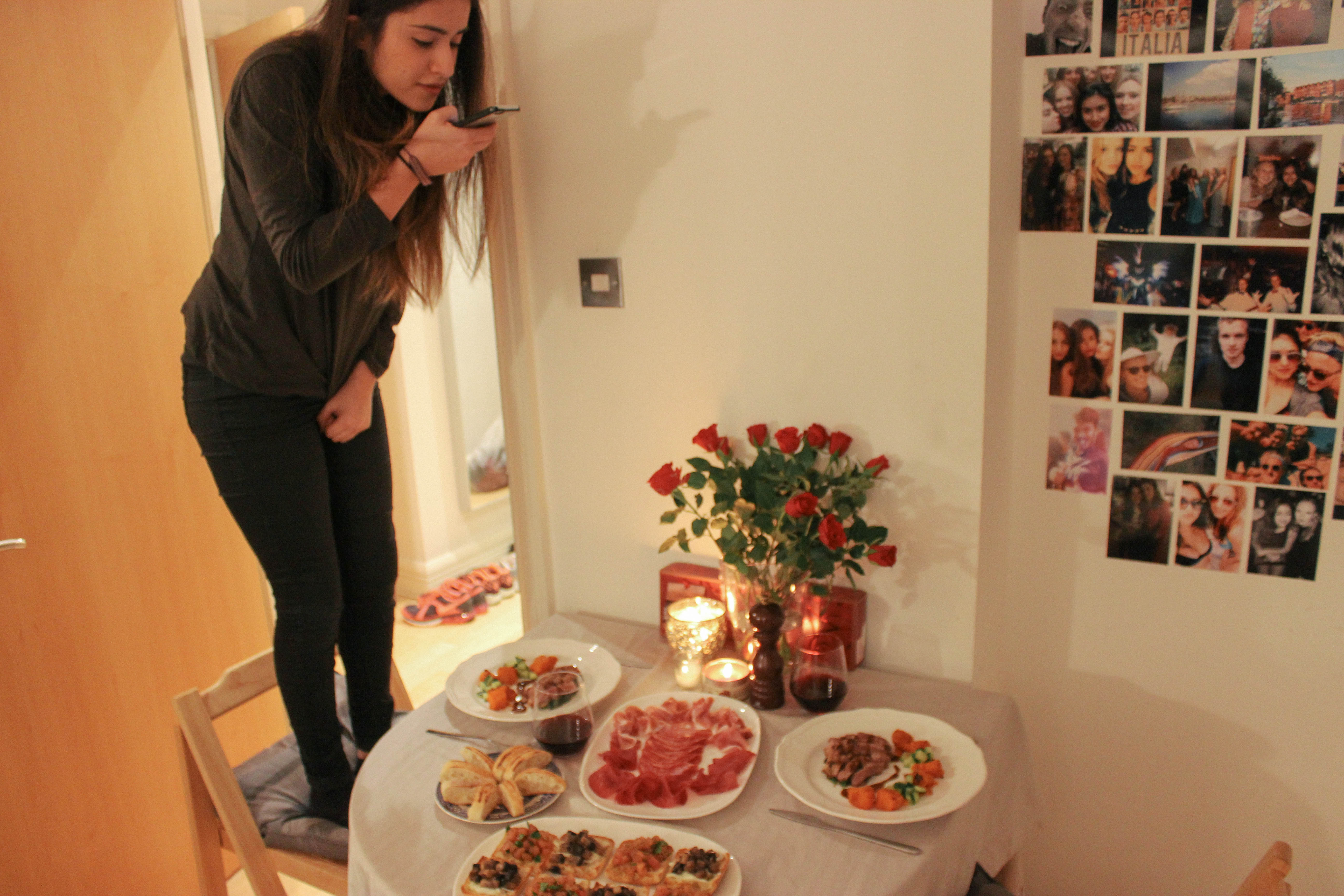 “Take those juicy lamb steaks out of the fridge 20 mins before you sear them (not yet). Cube your sweet potatoes and toss in olive oil, a bit of flour and a pinch of salt. Roast those beauties for 40 mins at 180˚C until soft and crispy. 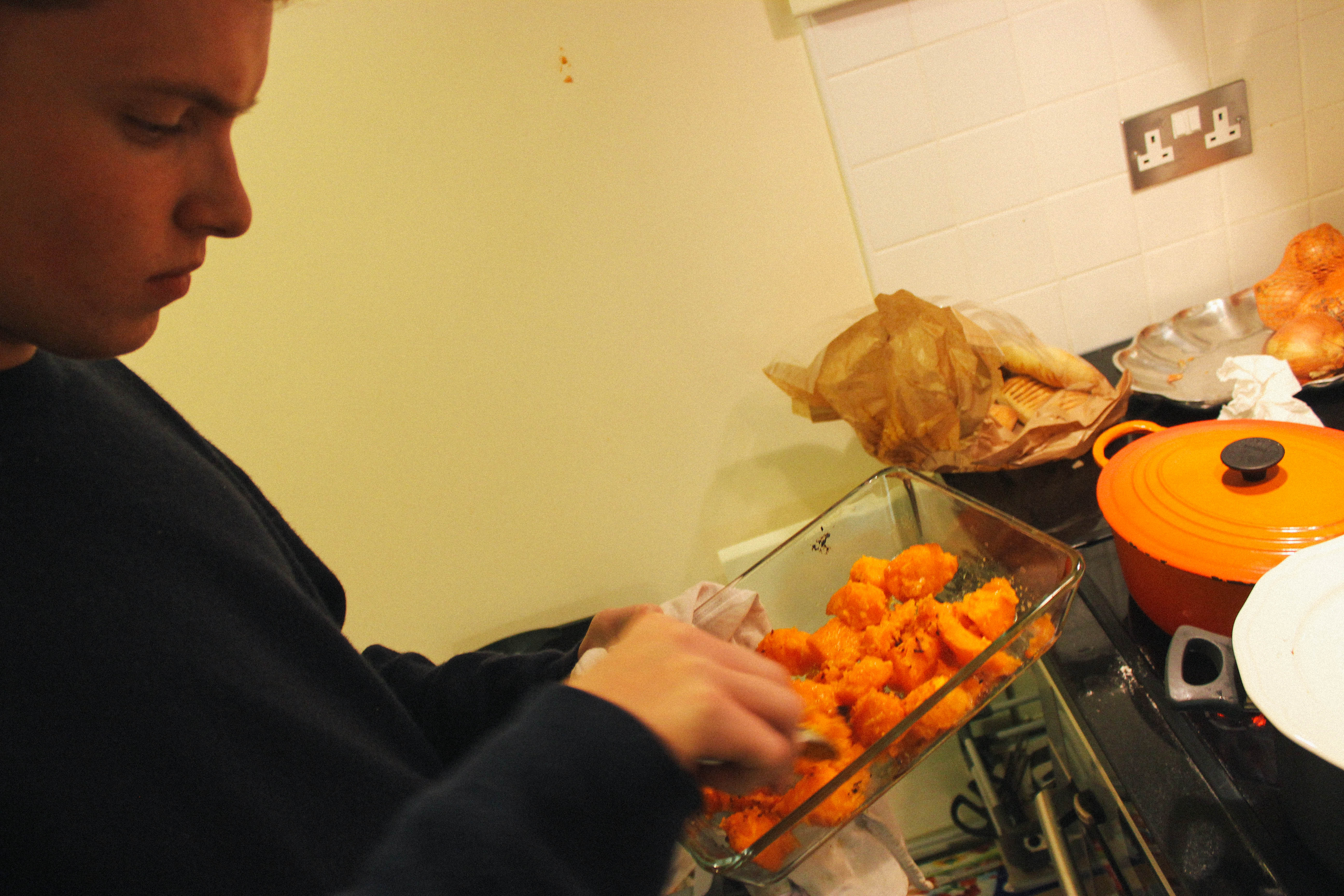 They don’t come much sweeter than that

“Next, make gravy (from packet or powder) and add a tablespoon of mint sauce to make it well saucy.

“Cube the courgettes and slice your mushrooms. Fry both in butter, with some chopped rosemary and garlic for more flavour.

“Now, with a very hot pan (caution: fire hazard, locate all available exits) fry the steaks on each side for 1-2 mins, sprinkling a bit of salt on each side as you turn them.

“At the same time, boil spinach in salted water for 1 minute, and drain.

“You can use the ‘thumb guide’ to cook the steaks to perfection: Touching your thumb to your index finger, use your other hand to feel the bit of palm under your thumb. This is what your steak should feel like when medium/rare.

“If you want it more cooked, touch middle finger and thumb for medium and so on. 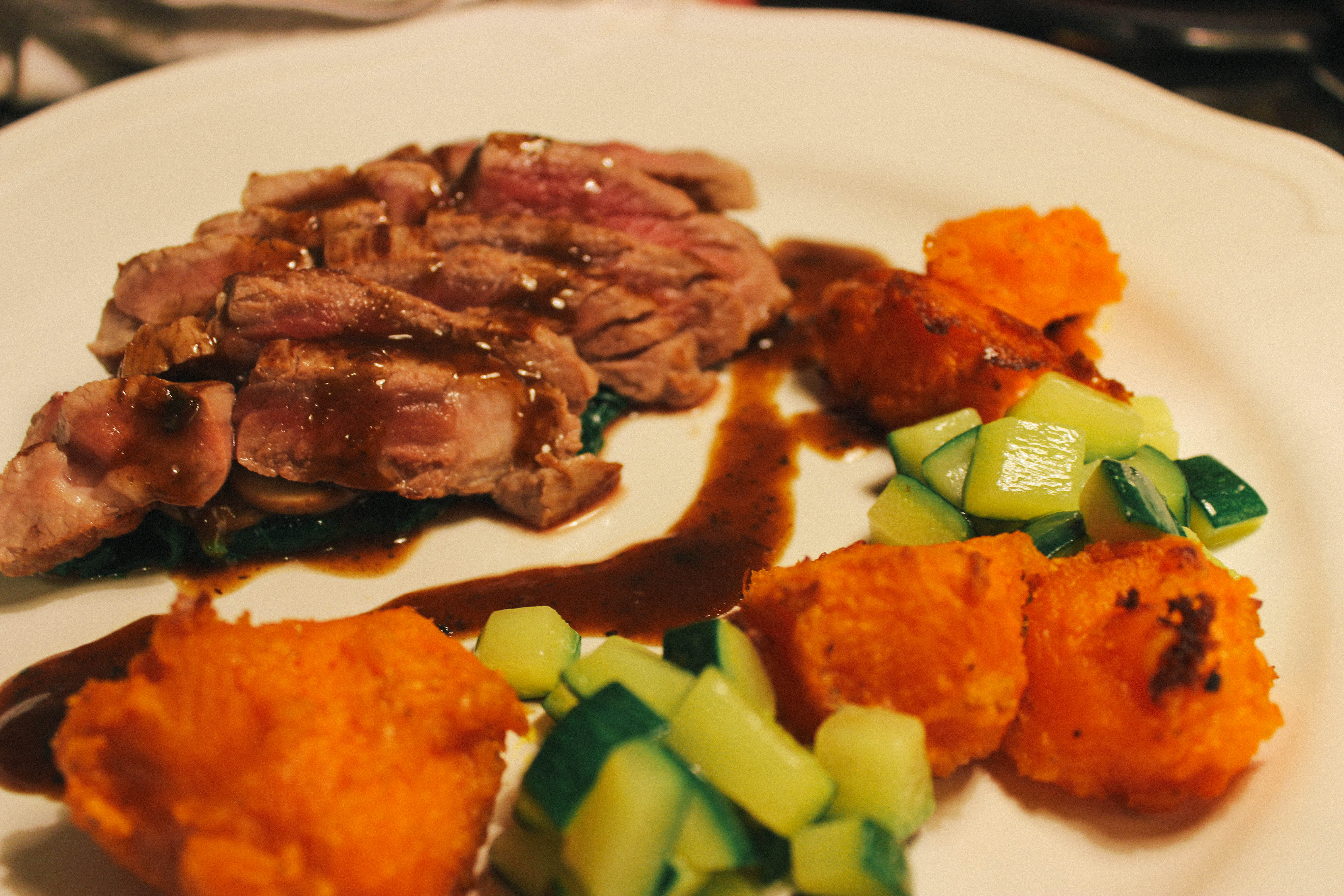 “To plate up, put the mushrooms on top of a bed of spinach and top this with the sliced steaks. Then spoon potatoes and courgettes on the plate, and fill the gaps with gravy.” 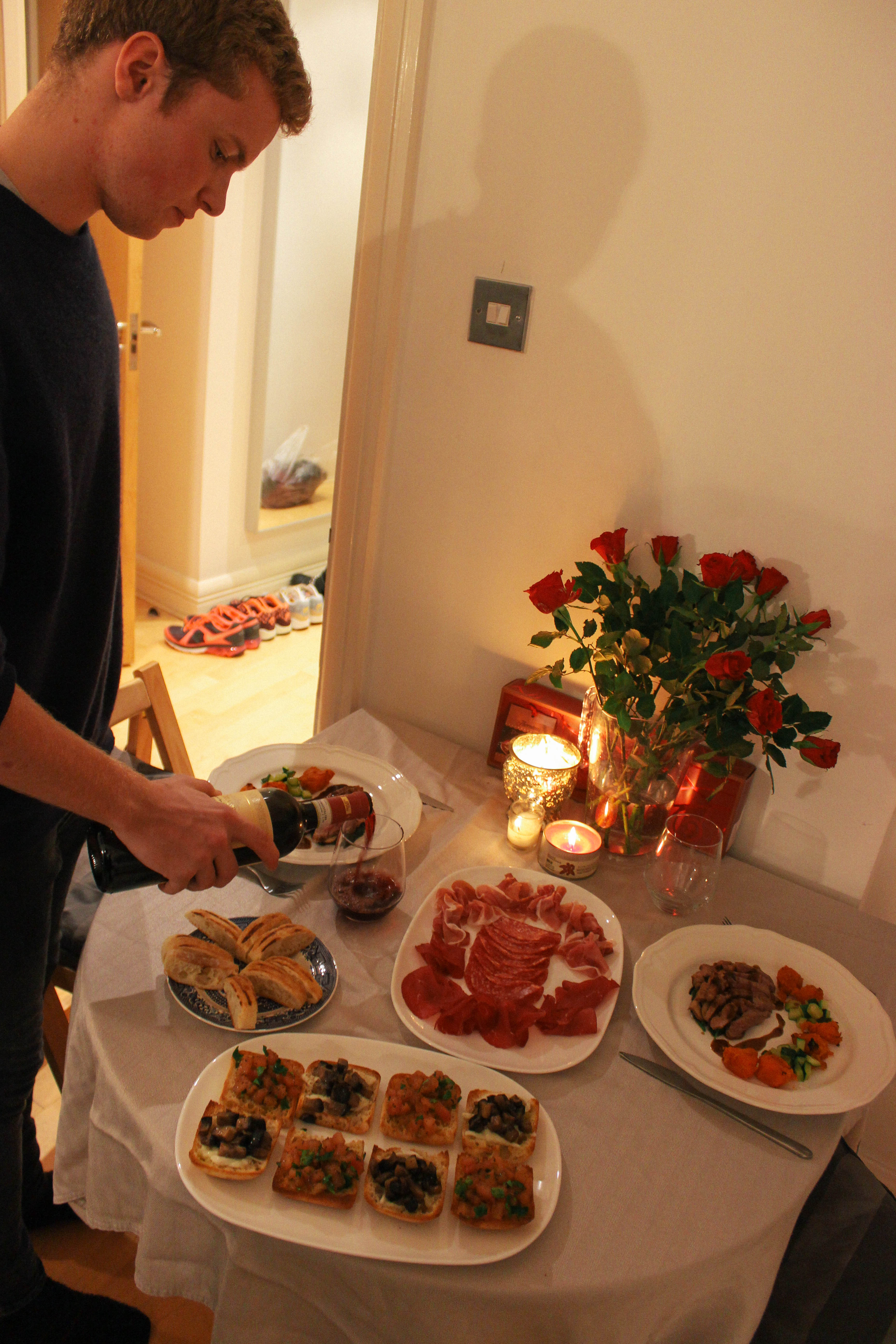 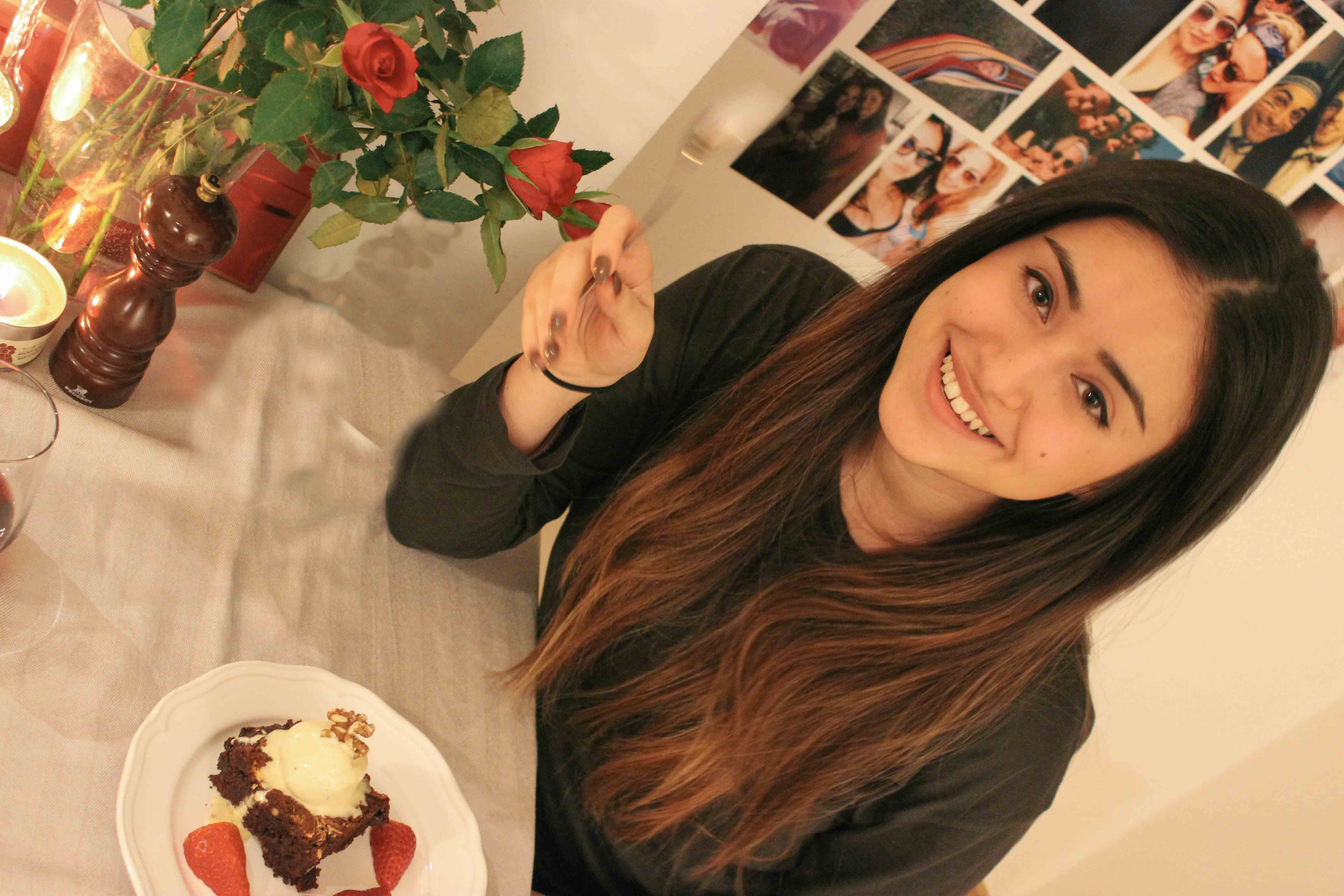 “Melt dark chocolate and butter slowly on the hob until they have melted and mixed into chocolate heaven, then leave to cool. Next, mix the eggs with all the sugar and vanilla essence. 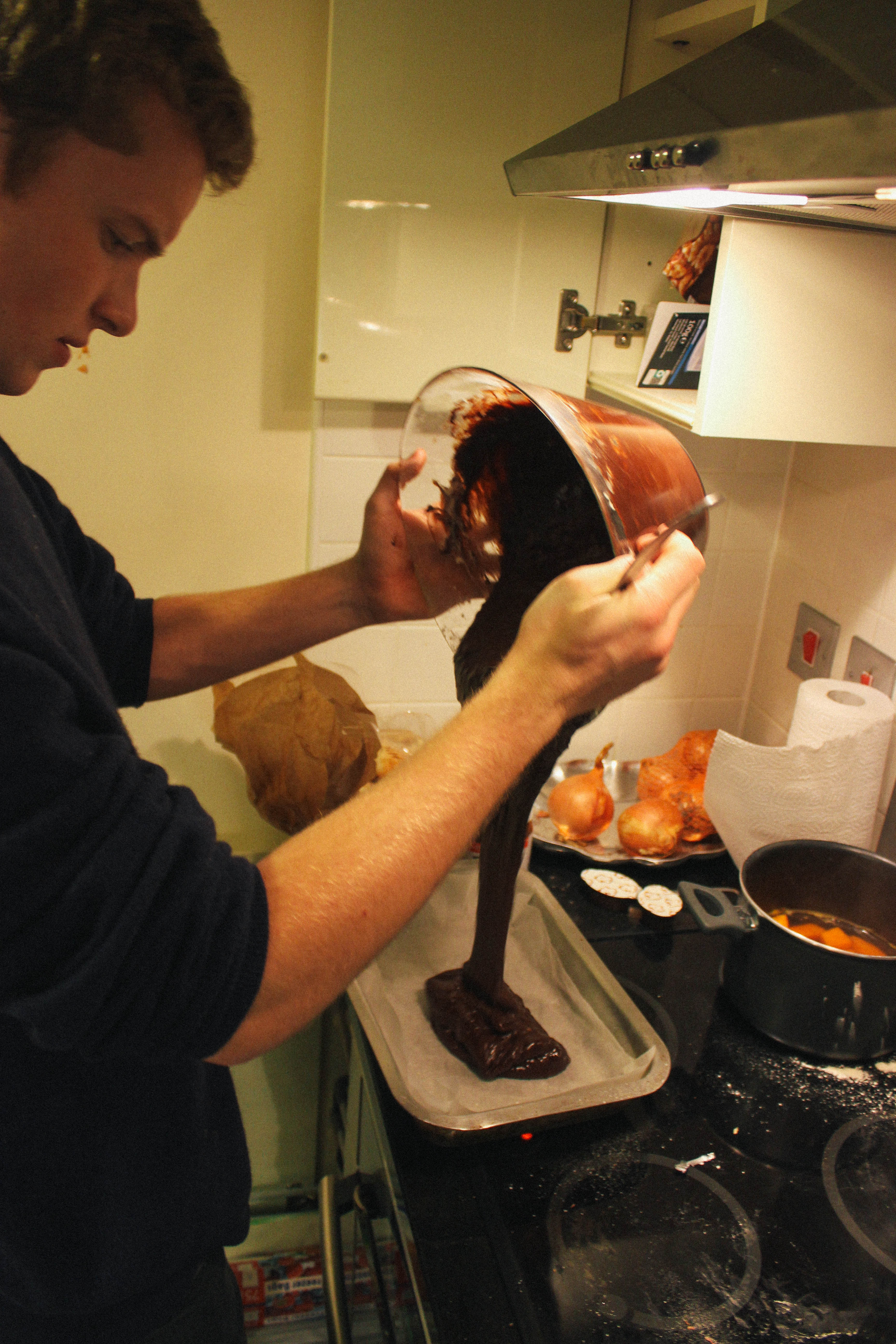 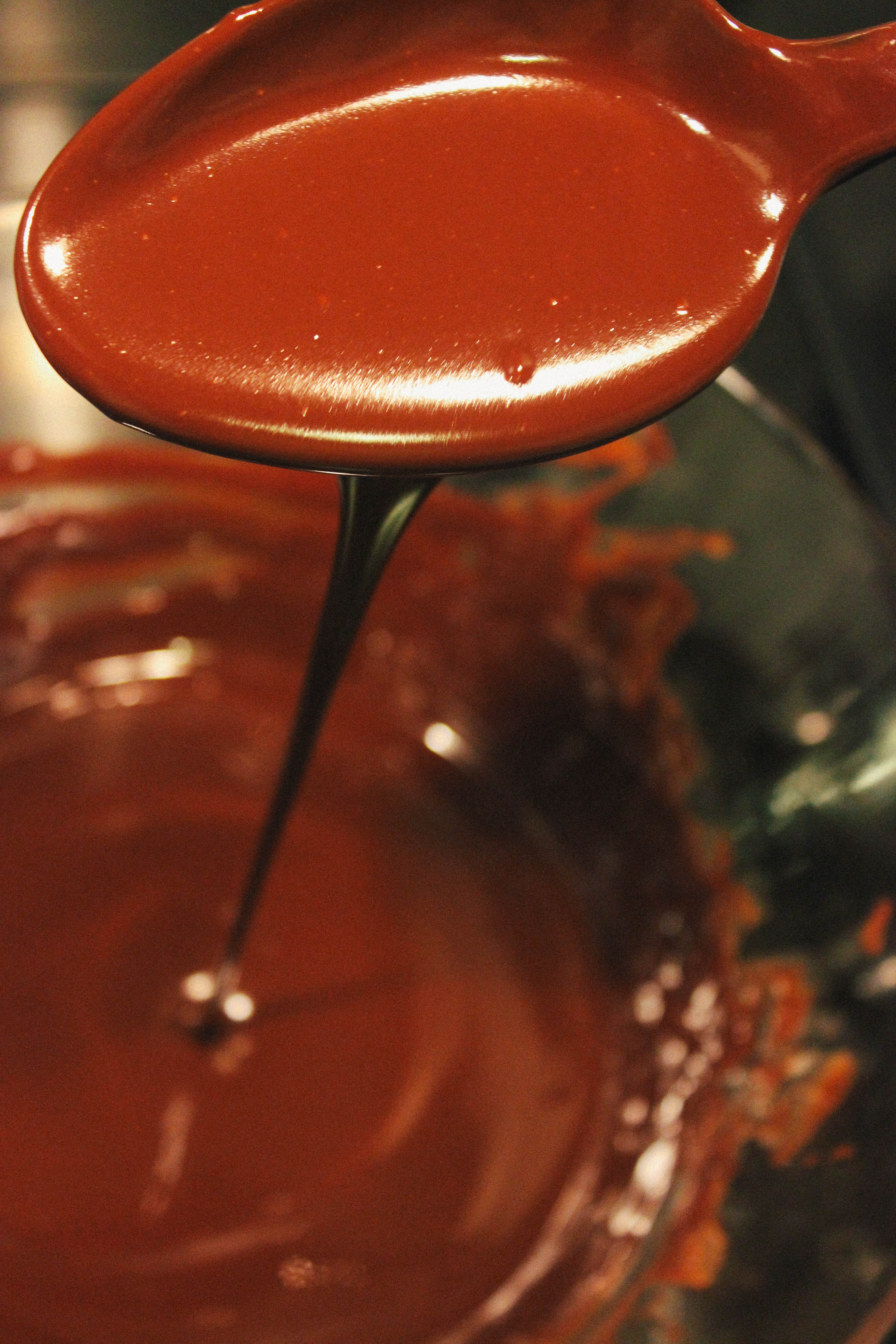 We challenge you not to lick the spoon

“Crush the walnuts when they are still in their bag. Then take the egg/sugar mix, stir into the butter/choccy mix and throw in the flour, crushed walnuts and salt. 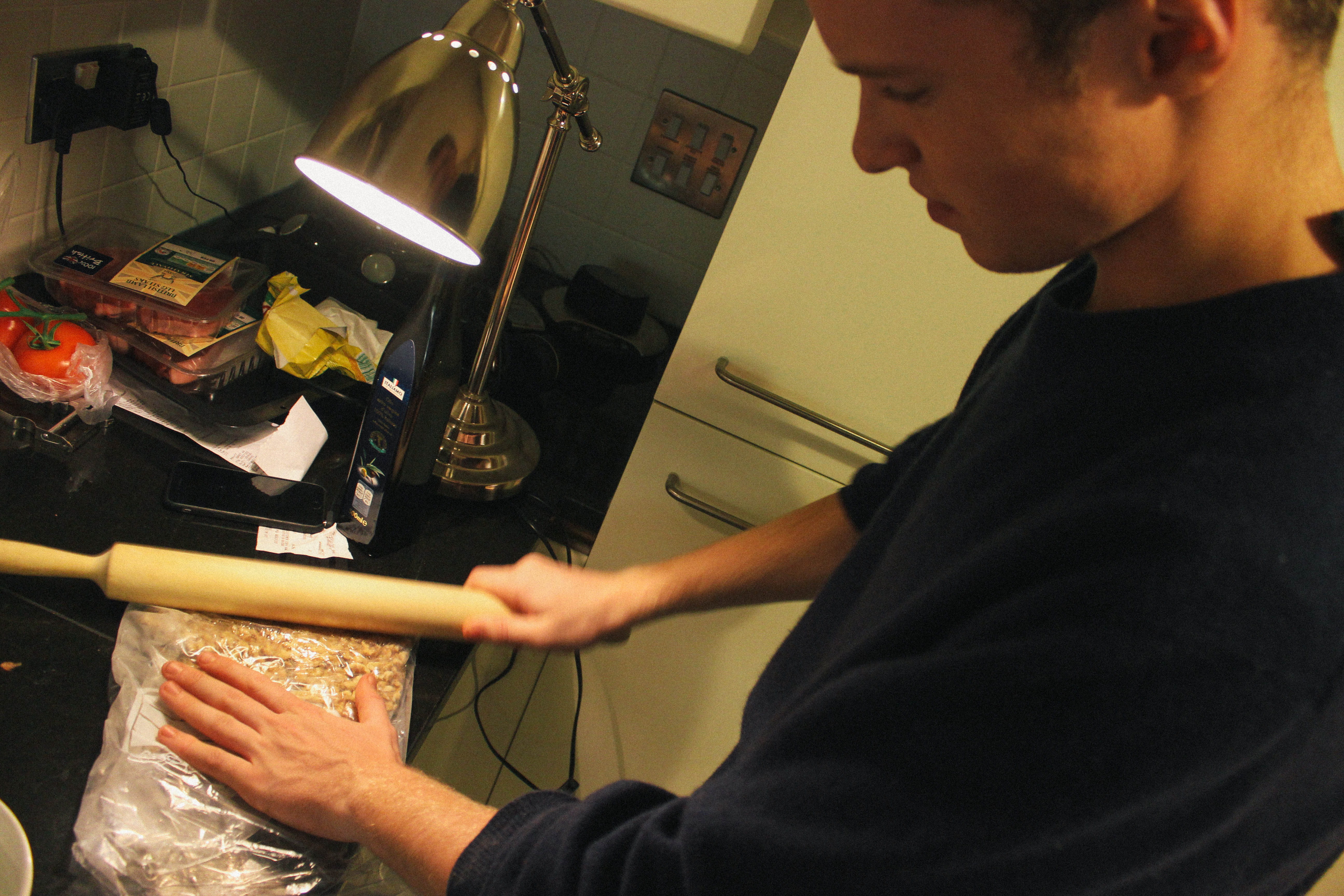 “Pour that liquid perfection into a baking tray lined with greaseproof paper, top with white chocolate drops and put in oven at 170˚C for 2 mins.

“In that time the white chocolate should have melted. Take the tray out of the oven and using a spoon mix in the melted white chocolate, so it looks like a fine Italian marble. 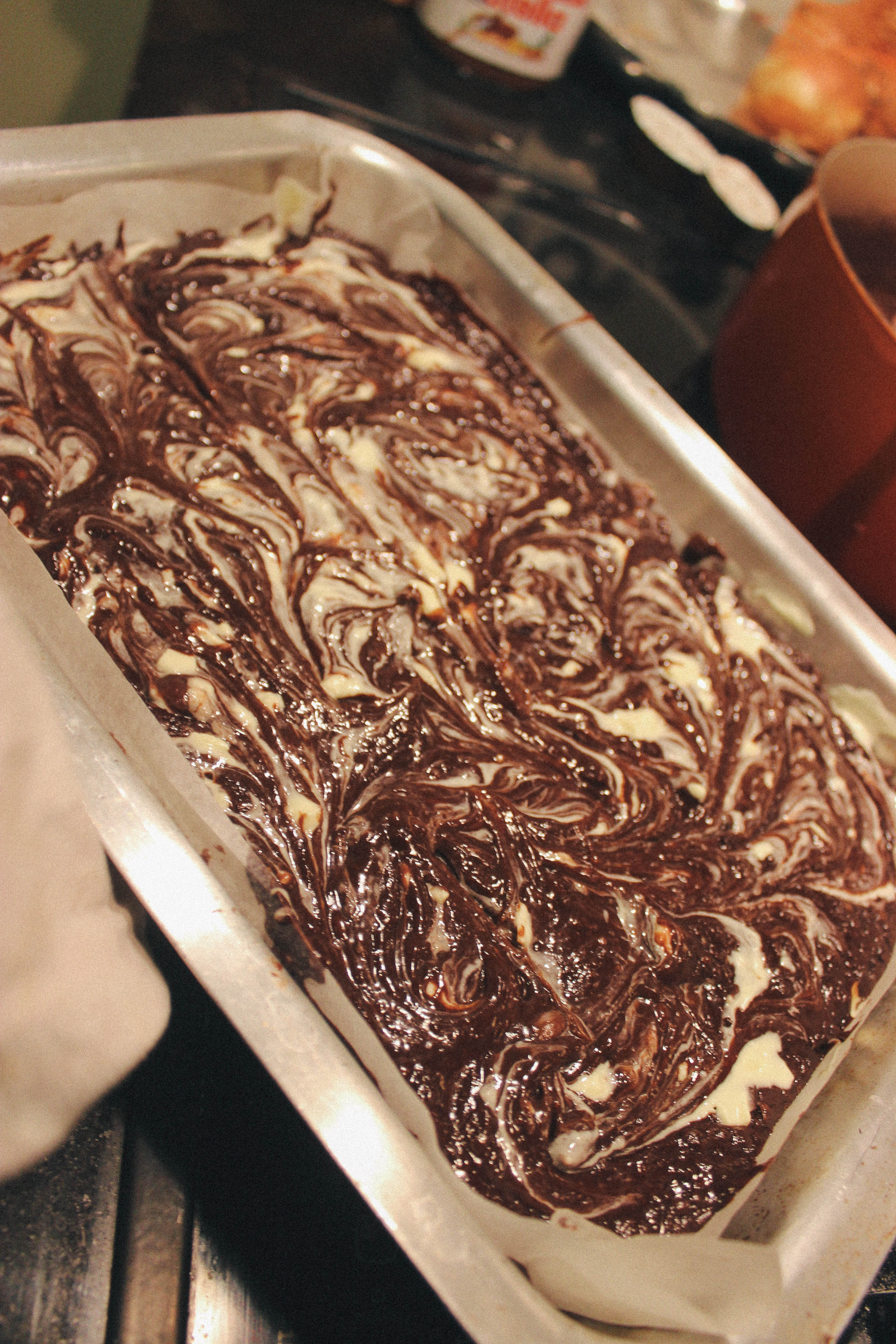 This is what you’re going for

“Pop it back in the oven at the same temperature for a further 25-30 mins until the middle is cooked, but not dry.

“Leave to cool, and if you want to make it easier to cut then you can put it in the fridge.” 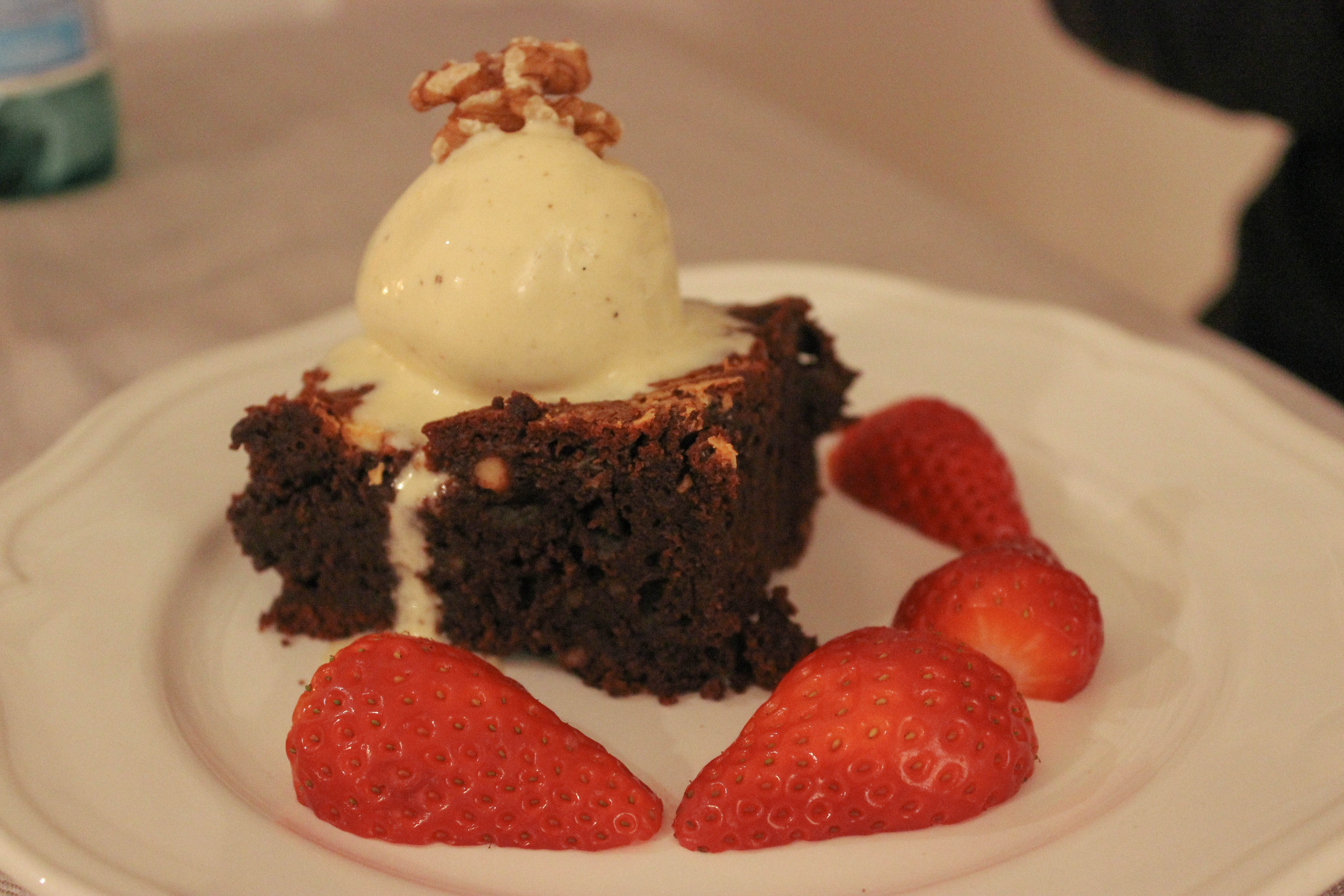 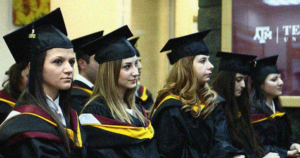