Uproar over ‘draconian’ plans to censor your ideas

They’re going to take away our freedom

Furious protesters have condemned plans to muzzle their ideas and freedom of speech at universities around the country.

Student groups around the UK have reacted angrily to the Home Office bill that would “criminalize” the spreading of ideas and stop students from speaking out.

Demonstrators at several leading universities, including UCL, LSE and Cardiff, have submitted emergency motions to their Student Unions. A horde of over 500 professors called the measures draconian and raised concerns over the stifling of ideas.

The Counter Terrorism and Security Bill will force unis to monitor and scrutinise any speeches and visiting speakers weeks in advance. Failure to comply would result in a court order.

Anyone looking to host a speaker will need university approval and any materials used will be closely analysed at least two weeks in advance.

Confusion remains over whether the responsibility will fall on academics or not.

The bill, headed by Home Secretary Theresa May, is currently going through the House of Lords before it seeks royal approval. It has already been passed in the House of Commons.

Change your profile pics to show your support for campaign to stop the CTS Bill #StopTheBill http://t.co/Wh86cKcKLT pic.twitter.com/csUDbZNmEs

In a letter to The Guardian, the group of professors called the bill “unnecessary and ill conceived”.

It added: “Our universities and colleges are centres for debate and open discussion, where received wisdom can be challenged and controversial ideas put forward in the spirit of academic endeavour.”

One of the signatories is Sir Tom Kibble, co-discoverer of the Higgs mechanism and Higgs boson. 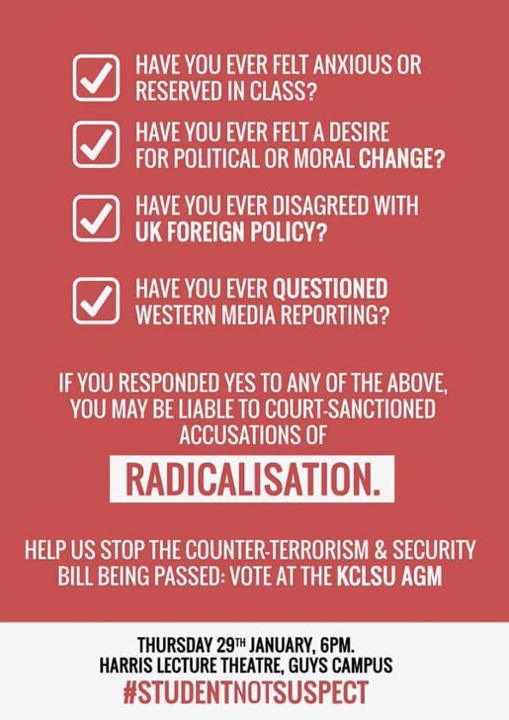 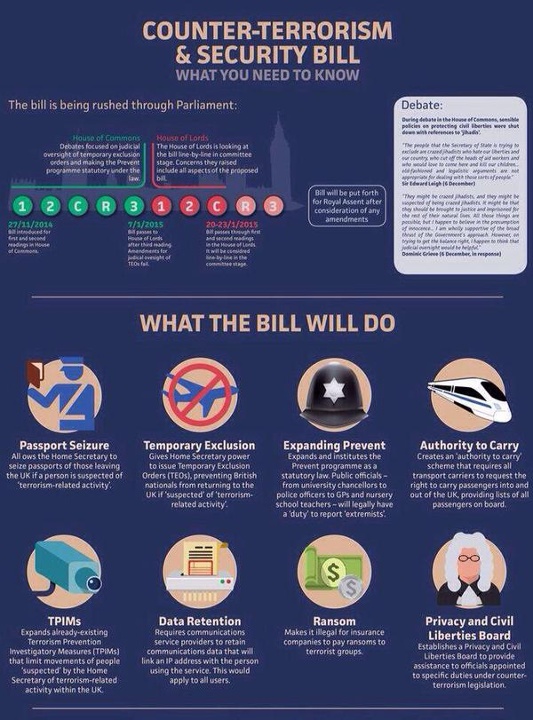 Student groups are also up in arms, with some saying Muslim students would be disproportionately affected.

Nona Buckley-Irvine, 21, general secretary of the LSE student union, said at the meeting: “I believe in being radical, I believe in questioning values, I believe in advancing political and moral change. These beliefs do not make me or anyone else a terrorist and don’t justify any level of monitoring.”

Ibrahim Ali, vice-president of the Federation of Student Islamic Societies, told The Guardian the government has always been “frosty” with his organisation.

He said: “In an environment where Muslim students already feel like they are under increased surveillance, the measures outlined in this bill will only serve to reinforce those concerns.”

The news comes as it was revealed 80 per cent of unis are stifling your freedom of expression.

Finger-wagging bureaucrats have issued 135 bans on songs, comedians, debates and religious and atheist societies – with 47 ranked as red and 45 ranked as amber in a new study.

Research carried out by Spiked Magazine, in partnership with The Tab, assessed universities and unions based on the socieites, songs and newspapers they had banned.