It’s the scourge of 21st century Britain, the male way of life that revolves around a “holy trinity of drinking, football and fucking”.

But according to a new study of spoken English, Lad Culture is on the way out and respect for women is in.

According to the Spoken British National Corpus 2014 study, it is becoming less common to use physical descriptions to refer to women.

The survey found phrases such as “sexy woman”, “pretty woman”, “blonde woman” and “daft woman” have gradually disappeared since the 1990s. 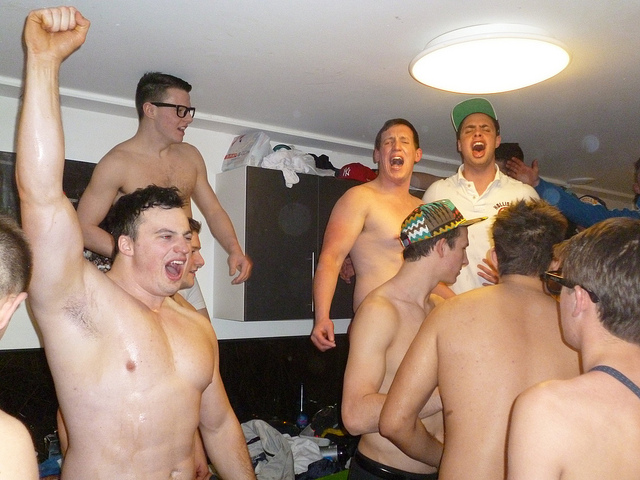 On lads on the way out?

Tony McEnery, a Lancaster Uni professor who led the research, said the findings show “negative descriptions of women have fallen away since the early 1990s”.

He said: “Women are being described more in their own right and less in terms of their appearance. The word ‘sexy’ [which was in the top 20 terms linked to women in the 1990s] has disappeared in normal usage and the association between ‘naked’ and ‘woman’ has gone down.

“Now we only rarely hear a woman being described in terms of her hair — blonde, brunette, redhead and so on — and there are fewer negative descriptions such as ‘devil’, ‘strange’, ‘daft’, ‘conceited’ and ‘damned’. New ways of describing women appeared in the study, including ‘international’, ‘gypsy’ and ‘Italian’.

“In a sign of how far attitudes have shifted, the term ‘girly girl’ has evolved to refer to women, like the actresses on Channel 4’s soap opera Hollyoaks, who deliberately conform to the old stereotype.

“In the past, women who had long hair, wore skirts and had manicured fingernails did not need to be given a special description because even if some were not that way, they were expected to be that way.

“Because the word ‘girls’ no longer means what it used to mean, people are reaching for the old archetype — and they are the ‘girly girls’.”

And the survey found that boys are being generally referred to more negatively, with an increase in words like “bad”, “silly”, “naughty”, “rude” and “lazy” to describe your behaviour.

Men today are described more in terms of their job than they were in the 1990s with a rise in descriptions including “City”, “business”, “working” and “rich”.