‘It makes you feel like a rock star’: Meet the naked butlers who strip off and serve you for cash

They can do more sit-ups than you

Imagine a naked butler and you might picture a male stripper.

Someone hench and oiled, thrusting his crotch at bridesmaids and trying to cop off with the bride-to-be. He’d probably try to get your gran to undo his g-string with her dentures.

That’s the opposite of Butlers in the Buff, the “male order” service delivering hot young studs to your hen do and birthday party. 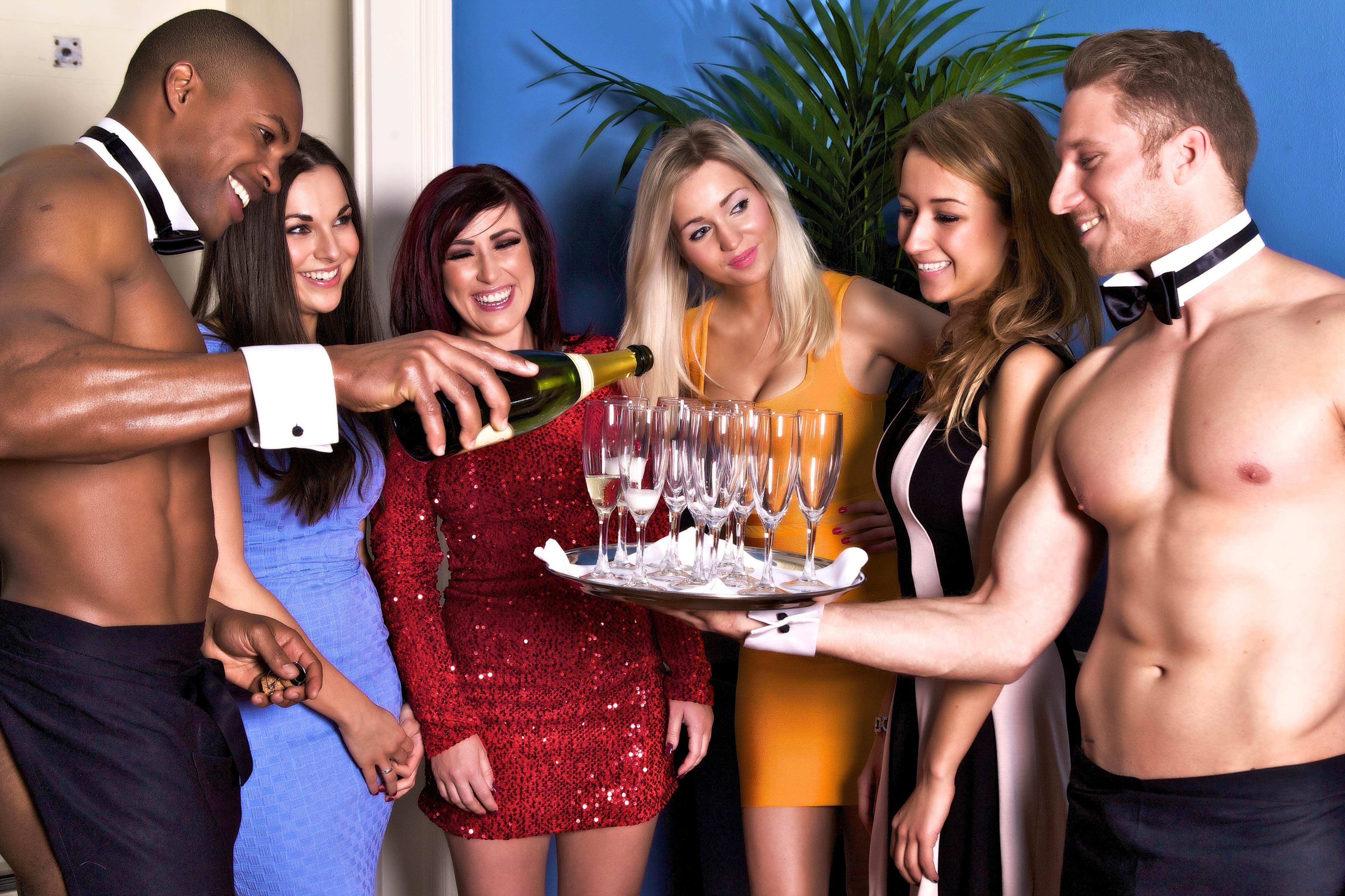 These topless waiters are different: they have a strict moral code and see themselves as slick professionals.

Alex from Bristol is one of the chosen ripped-few working for Butlers in the Buff.

By day he works for an engineering firm in Gloucestershire.

But by night he drives to people’s houses, takes off his shirt, dons a bow tie and cuffs to lead his double life as a naked butler. 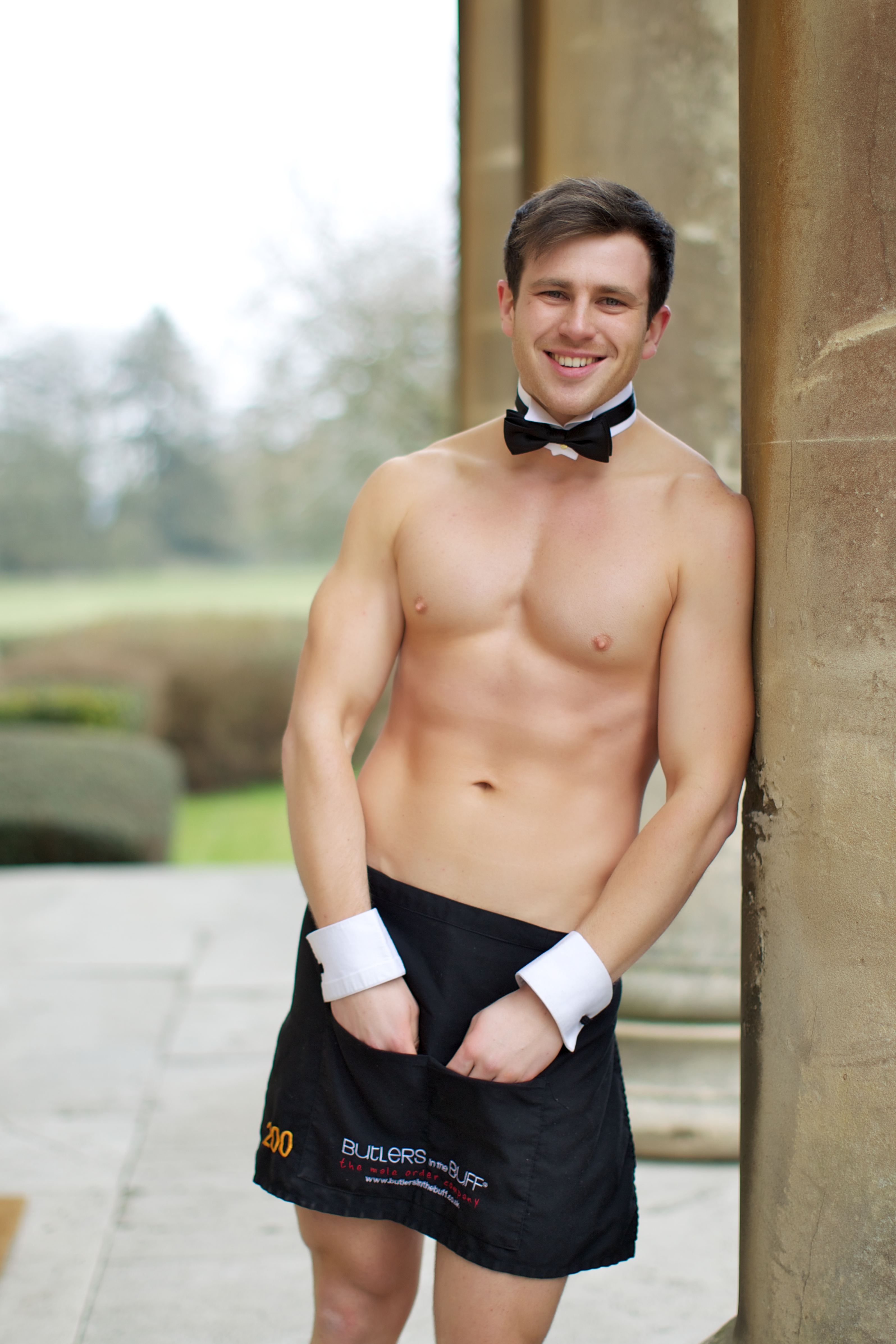 Alex explained the rush of working as a topless waiter.

“It makes you feel like a rock star once a week. Working is like a performance and it’s not the way I usually am.

“You have be versatile, serving people, being friendly and playing games. We do silly stuff instead of sexual stuff: what we do isn’t sleazy. Giving donkey rides seems to be a favourite.

“A lot of the job is getting your party started. I am kind of like a catalyst for parties and not just an entertainer. I’m there to get everyone going as the centre of attention.

“I never really know what the night is going to be until I get there, except that it’s a hen do or a birthday party.

“That’s what keeps the job interesting. I love the surprise of just turning up and knowing I’m going to be there as a butler.

“There’s a range of madness at these parties. Some are quite sedate, others can be very hands on so you have to be quite thick skinned.” 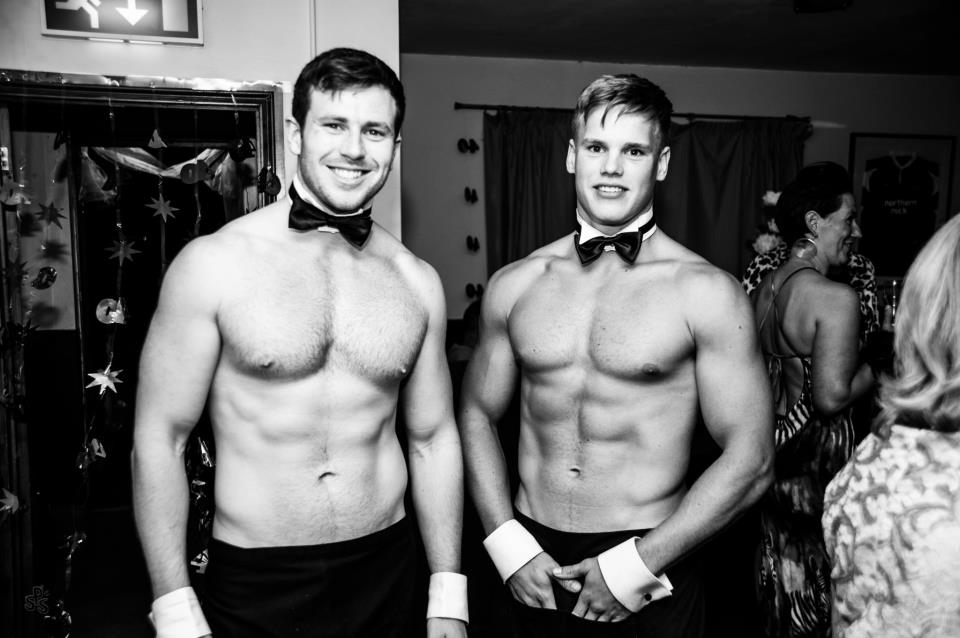 Butlers in the Buff say they’ve catered for Sting, Elton John and even a few members of the Royal Family.

Their favourite customers are 40th and 50th birthdays — even serving tea and cake, arses out, for 90-year-old grannies.

Alex explains: “We have strict rules at the company and you do have to behave professionally. You hear stories of other companies doing whatever they please at parties but that’s not us.

“The rules are the rules and that means you can’t touch anyone, except for hands round each other for a picture or a picking up a bride, say, for being carried through a threshold.

“No matter how eager they get, as long as you’re not grabbing each others bits and bobs, that’s fine.

“The odd slap on my arse and I’m not going to be too fussy. People get drunk and they get grabby but as long you’re not behaving inappropriately, that’s fine by me. 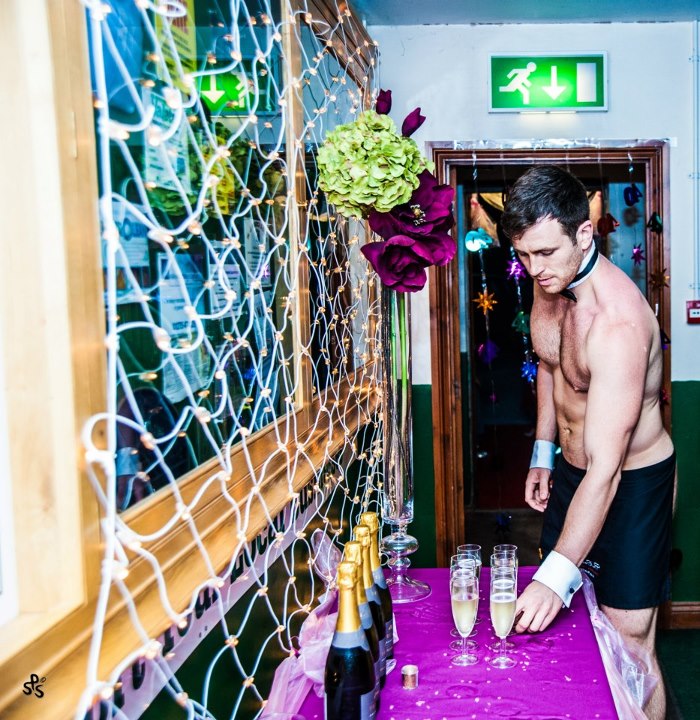 Alex started his job seven years ago before he went to uni, when he was only 20.

“I’d never heard of it before, I’m a straight guy and don’t have much interest in naked men.

“I worked out for two weeks, flat out, before my interview and flirted outrageously to get the job.

“I didn’t want to turn around when I was 80 and wish I’d gone for it. I’ve been doing it for seven years now.

Alex, 27, worked as a naked butler to pay his way through uni.

“When I was at Bath, it was the perfect student job. You get paid more than doing this than a bar job and it’s a lot more fun.” 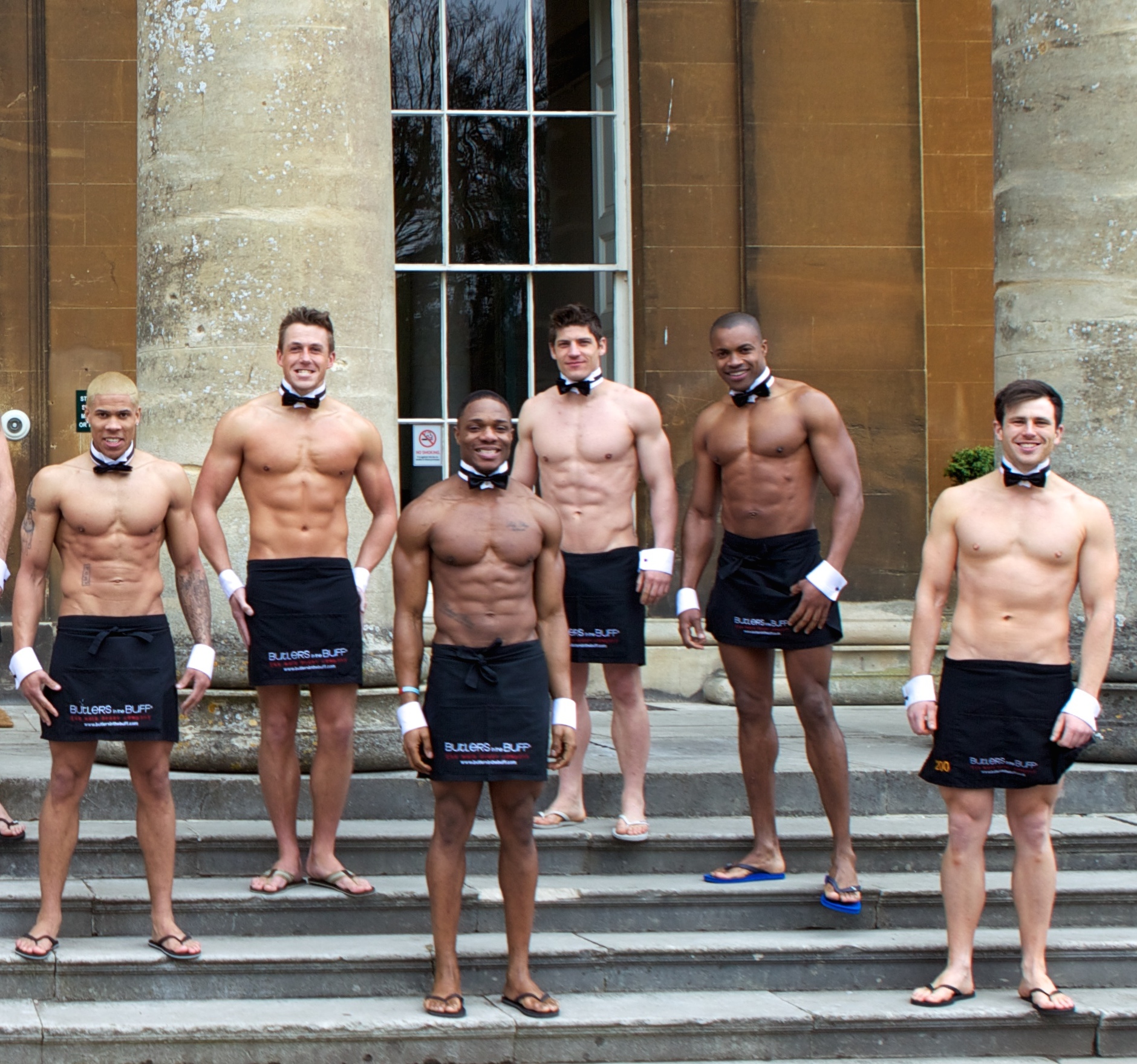 Is it hard to explain to everyone?

“I don’t really care if people know. My girlfriend doesn’t ask about it and rather I didn’t do it. She doesn’t really want to know.

“But if I was up to no good I would have been sacked by now: our company is strict like that.” 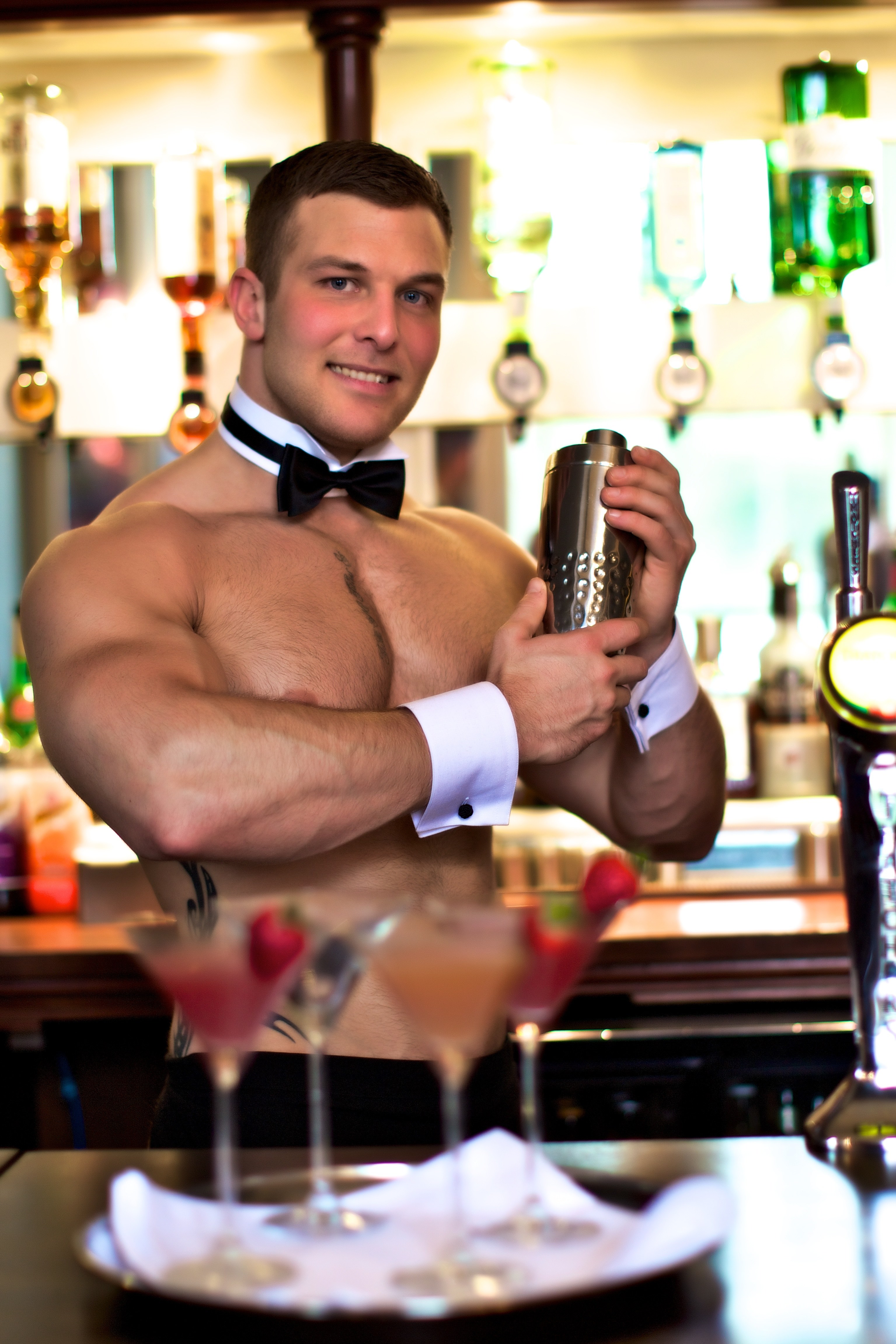 Alex and his colleagues cost £119 to hire each, for a minimum of two hours.

When he arrives at parties, he fires up his professional charm.

“My opening line which has worked wonders over the years is to say, ‘Would you like some wine?’ and if they decline I say, ‘Well, how about some shit banter then?’

“It works surprisingly well. We don’t take ourselves too seriously: if you make a bit of a tit of yourself, everyone will feel at ease.

“People think you’re arrogant if you do this job, if you’re getting naked in front of people you must think you’re God’s gift but that’s not what we’re about.” 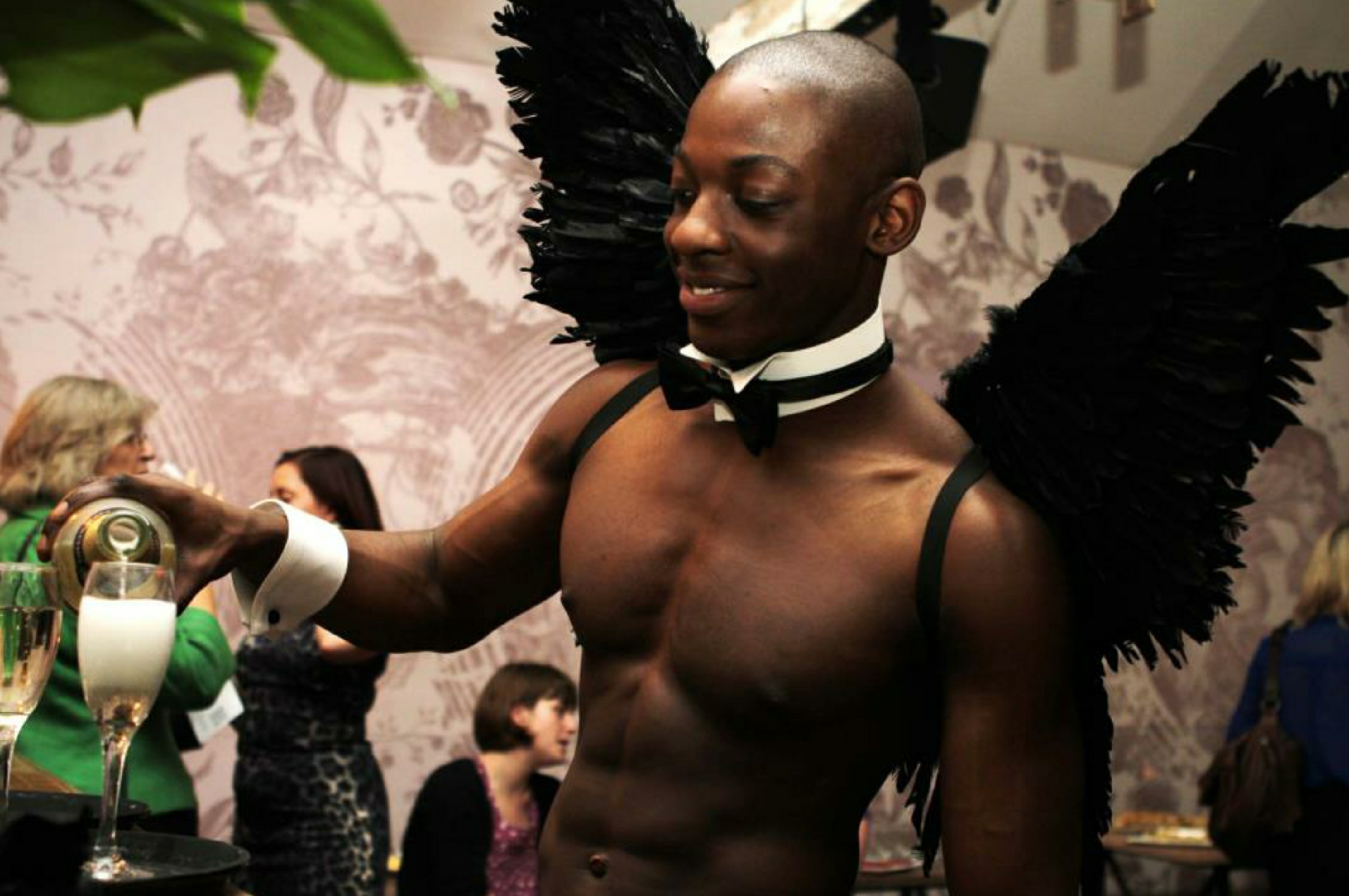 This is really what the job is about: not just being eye-candy but getting a room fired up.

“When I first started, I was trading purely off my banter because I was still a bit flabby. The best butlers have the best conversation.

“Looks are good but the gift of the gab is really important. Those guys can take control of a room full of women and blow them away.”