UCAS Hogwarts rejection revealed to be a hoax

A Twitter prankster is ‘rejected’ from Hogwarts, despite top marks in waving a stick about

For young uni hopefuls across the country, A-level results day can bring extreme joy or sadness. 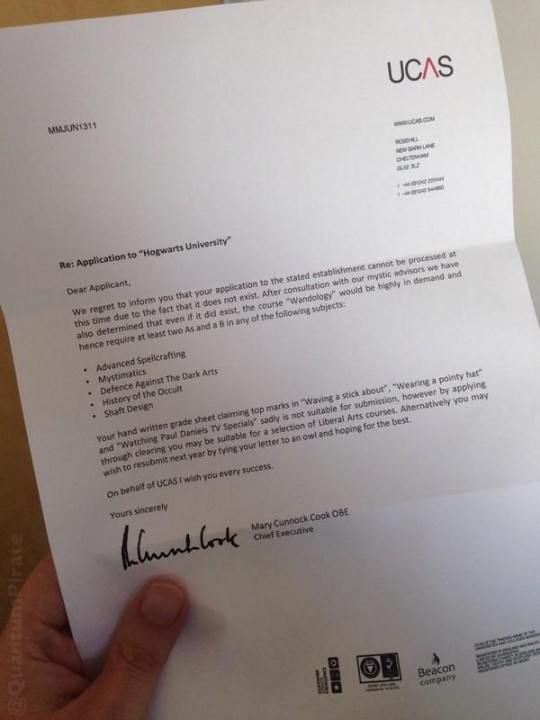 Rejection: no shaft design with Hermione for you

The picture seems to show a reply from UCAS Chief Exec “Mary Cunnock Cook” turning down the applicant to read “Wandology” at Hogwarts “due to the fact that it does not exist”.

She added: “After consultation with our mystic advisors [sic], we have also determined that even if it did exist, the course ‘Wandology’ would be highly in demand and hence require at least two As and a B in any of the following subjects: Advance Spellcraft, Mystimatics, Defence Against The Dark Arts, History of the Occult, and Shaft Design.”

QuantumPirate admitted he forged the letter and posted: “If they thats the lamest fake ever they really haven’t done their research, I’ve done plenty lamer than that.”

If they think that's the lamest fake ever they really haven't done their research, I've done plenty lamer than that. pic.twitter.com/RPvC739Xrr

Is it as lame as applying to Hogwarts, though?