They say to be successful you need a good idea and perseverance.

Twenty-two year old Alfred left uni with a 2.1 in Marketing but no job offers.

But he didn’t give up – set on finding his dream job, Alfred handed out CVs to morning commuters in Waterloo station.

He was quickly bombarded with interview requests by Cityboys. 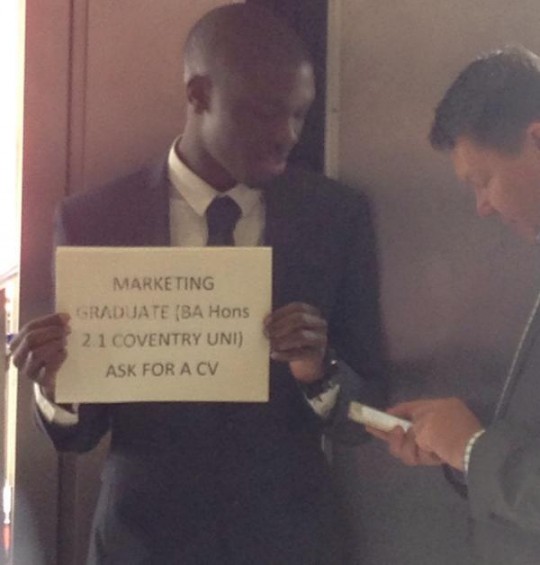 Speaking to The Tab, the self-styled ‘CV Man’ said: “I’ve heard of people calling companies directly asking for work without sending a CV, this is just the next step.

“It was nerve-racking at first. I had to muster up some courage and hold up my sign.

“For the first ten minutes nobody noticed, but after the first person approached me ten more came up with business cards. One guy even got me a coffee.”

Thanks to the guy that bought me a coffee this morning #WaterlooStation pic.twitter.com/ZkO365F5VA

Alfred now has meetings and phone interviews for this week, and pending offers on LinkedIn.

He thanked those wishing him support online, adding: “It feels really good, hopefully it will lead to more offers.”

Even former athlete Kelly Sotherton retweeted her support. Alfred said: “I didn’t know who she was at first, but once I realised I was really happy.”

Others have chimed in:

@fr3dsantana well done for not just sitting at home watching tv and claiming benefits more young people in 2days society should b like you — Gemgems (@gorgeousgem) August 19, 2014

Don’t feel bad though, those hours sweating over your LinkedIn profile will probably get you tons of offers.