‘I stayed in with a DVD’: England star Gary Ballance GROUNDED after Tab scoop

Cricketer Gary Ballance said he was ordered to stay in with a DVD after The Tab published photos of his drunken night out.

We caught Gary topless in a Nottingham nightclub, telling fans he was a “drunken bastard” after England’s first test against India in July.

And England’s number three admits he spent the night in “with a DVD” after England’s win in Southampton. He told the Daily Mail: “It was suggested to us that it might not be the best idea to go out.”

But Gary also said our story spurred him on to score a vital hundred in the next game.

He said: “On that first morning at Lord’s I was a bit nervous and embarrassed.

“I was under pressure after what happened but that may have been good for me because I put in a performance and proved a few people wrong.” 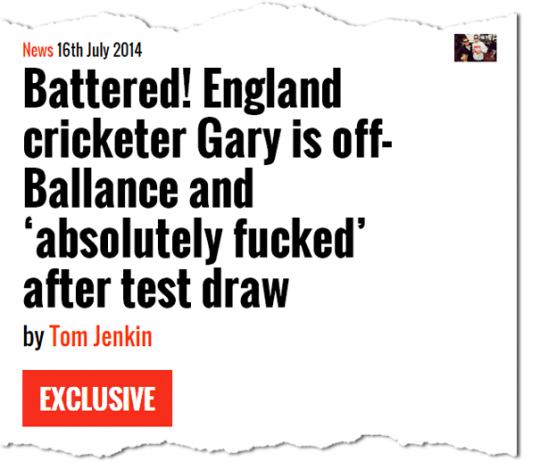 How we broke the story

He added: “We had been told we could go out and I like to let my hair down a bit at the right times but not in a stupid way. I probably had one too many. And I can’t ever remember taking my shirt off before. I was nervous about what my parents would think but they were very understanding. I think they have even framed one of the pictures of me!”

“I have joked that I had bowled a maiden at Trent Bridge and wanted to celebrate. But the timing of it coming out made me feel as if I’d let the team down the night before Lord’s. It’s not what you want from yourself.”

“Cooky took me out for some food with Joe Root and Matt Prior and just said: ‘These things happen and that in a few days you would be laughing about it. It will all be forgotten about.'”

Our story on his drunken antics lead to widespread national coverage.

We revealed how he posed for pictures with fans and said: “I’m not a cricketer tonight. I’m just a drunken bastard.”

Harrow-educated Gary was also praised by pundits for an “impressive” over of leg spin during the first test, but he was left legless and in a spin by the extensive drinks menu at Pandora’s, where doubles cost just £3.

At the time, England coach Peter Moores said he had warned the player about the incident – but correctly decided not to discipline him.

Moores said: “I am aware that some of the England players were caught on camera relaxing after the conclusion of the recent Trent Bridge Test match.

“As the players had been released at the end of the first Test and were not due to meet up to begin preparations for the second Test until Monday evening, and there were no suggestions of impropriety there is no need for any disciplinary action.