The McGangbang and the Butterbeer Frappuccino: The Tab tries secret menus

Everyone’s heard about the “secret menus” that are supposedly on the hush-hush at our favourite fast food joints.

But do they really exist? And are they any good?

I took a selection of the best looking secret menu items on the internet and tried ordering them in person. 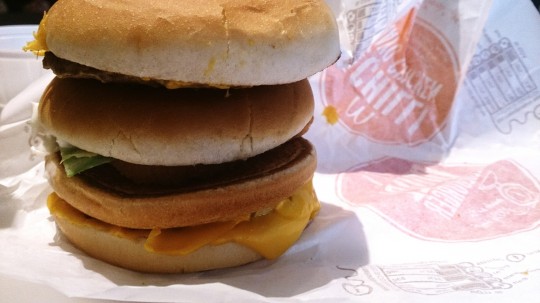 Possibly one of the most famous secret menu options, the McGangBang consists of a 99p Mayo Chicken smashed inside a £1.49 Double Cheeseburger.

The result is an oddly enthralling mix of meaty flavours, weakening your wallet by a measly £2.48.

The cheese and the mayo mix in your mouth to create an excellent creaminess that bonds the chicken and beef together in beautiful greasy glory. 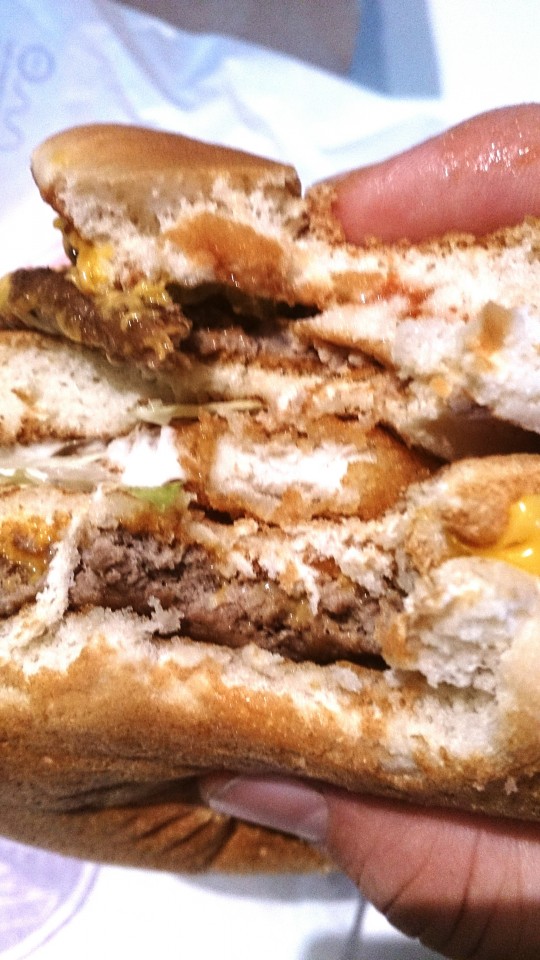 Can you get one just by asking for a McGangBang? I couldn’t.

I had to ask for the two items and put them together myself, but some net-savvy McDonald’s staff might know what you’re talking about if you ask. 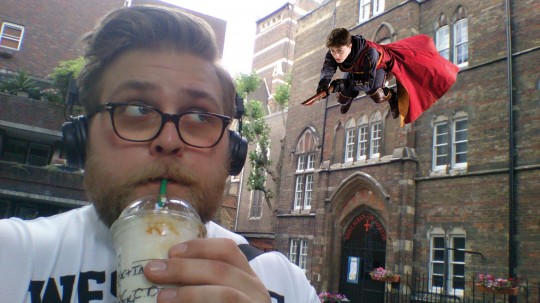 *Picture may be slightly photoshopped

Straight out of Harry Potter, this inventive concoction will make the faux-cozy interior of the coffee chain feel more like the Three Broomsticks Inn.

Starbucks’ “secret menu” doesn’t actually exist. It’s more of a collaboration by imaginative coffee enthusiasts to make the best of the many ingredients available at your local tax-dodging superchain.

There are endless recipes available on the internet, and this sugary Rowling inspired frappé is easily one of the best. 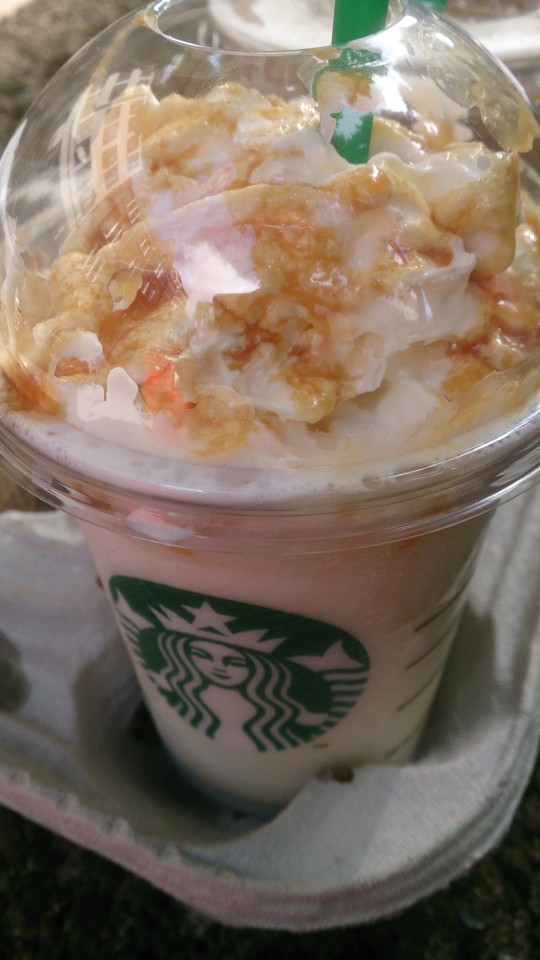 If the Hogwarts kids drank this everyday, none of them would have any teeth left

All you need to do is pop in and give the barista rigorous instruction, and you’ll get a delicious, buttery, diabetic nightmare for £4.15. 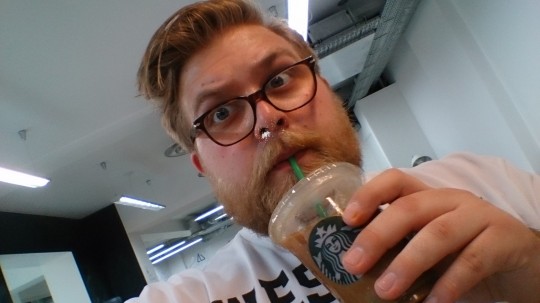 Ditch the powders and grab a coffee

Try this at your own risk.

It’s four shots of espresso and two shots of white chocolate syrup, in a grande cup, filled with ice, and topped with milk. 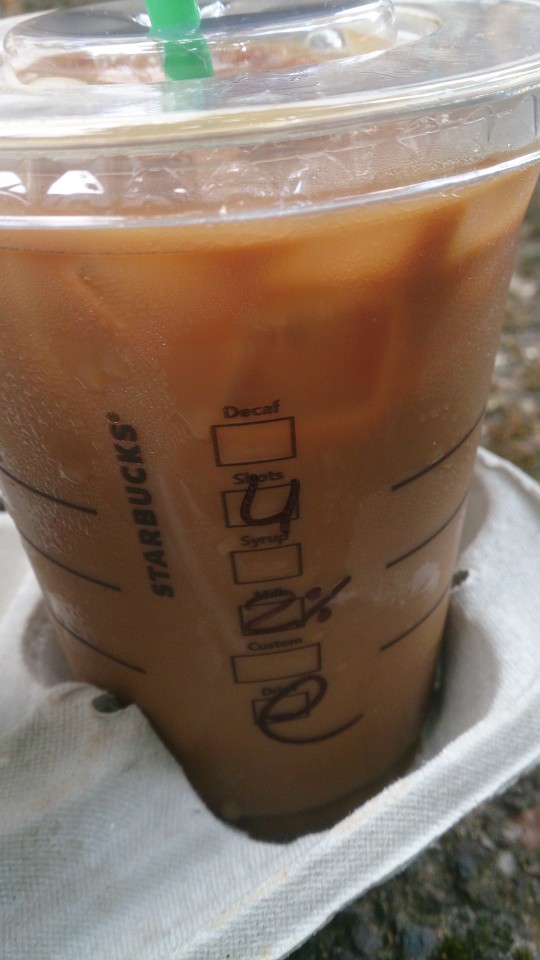 It practically shoots straight to your veins, probably sending you over the drink-drive limit of sugar and caffeine.

It’s not particularly nice, but bloody hell it gets the job done. 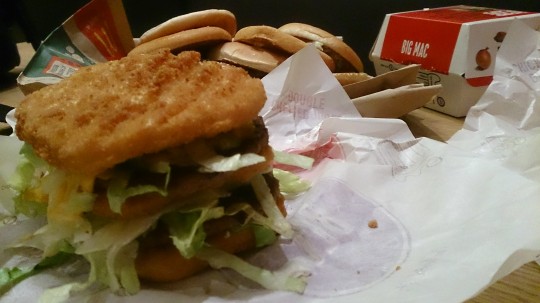 It took a lot of work to build

It’s like a Big Mac, but there’s fried chicken instead of burger buns.

It may as well be called the Big McFucking Heart Attack. 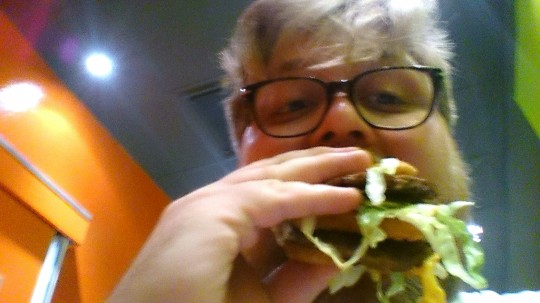 Felt the need to prove that I actually ate it

As I sat down to construct this meaty monster, I wondered how I had ended up like this, covered in special sauce, about to eat something that looked completely unappetising, with four-and-a-half blank buns in front of me. 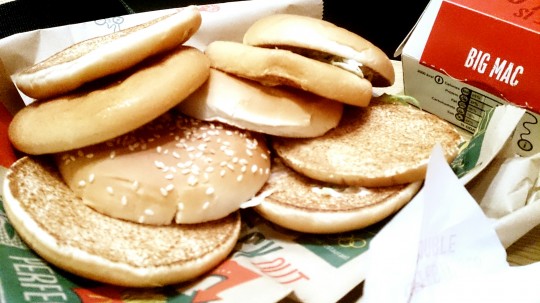 But it was much better than I expected.

The crunchiness of the breaded chicken went perfectly with the unique flavour of the Big Mac sauce, and that McDonald’s burger flavour somehow tied it all together. 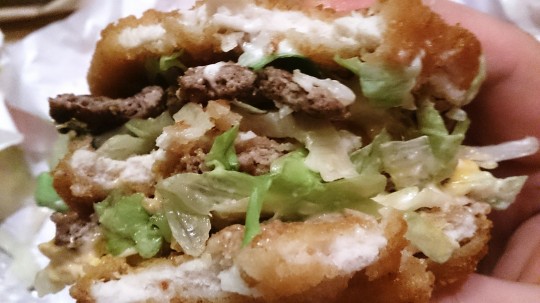 The lettuce is a godsend in this lump of processed meat

At £5.68, this is one of the more expensive secret options. It’s probably not worth that much, but if you’re the kind of person who likes a Maccy’s after the gym, it’s perfect. But greasy. 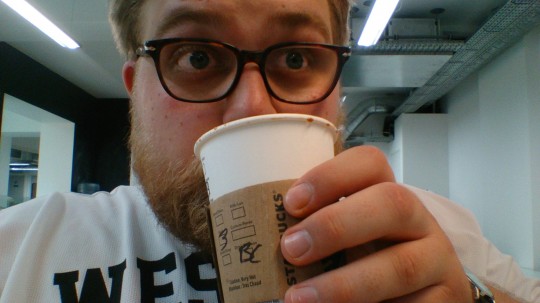 I haven’t slept for six days!

Perfect for hitting the library all night, but it is TERRIFYING.

Get yourself a filter coffee, and have three extra shots of espresso in there. Warning: it will taste horrendous. 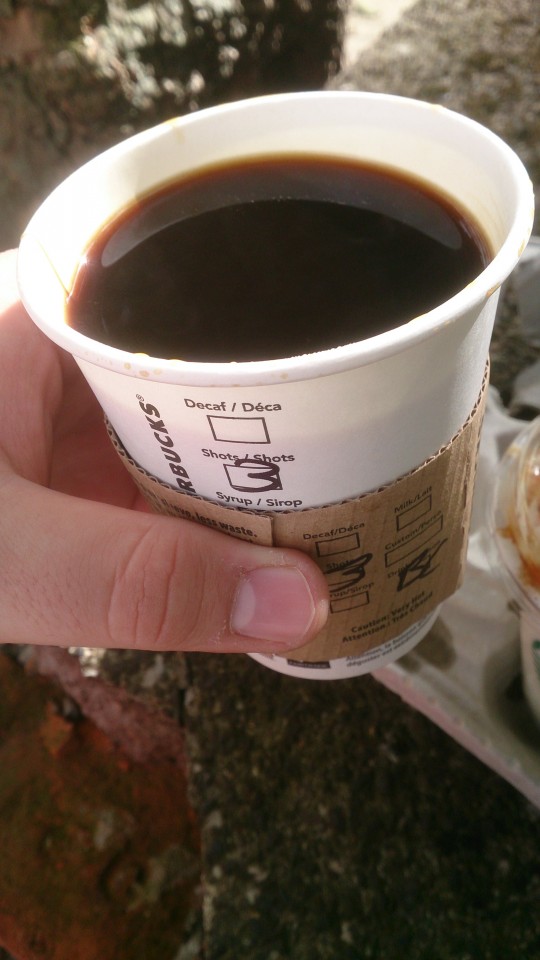 Darker than the devil’s butthole

It’s a turbo-charged, heart-pumping motherfucker, and it’s only £2.60.

Great value, and a bit dangerous. What more could you want? 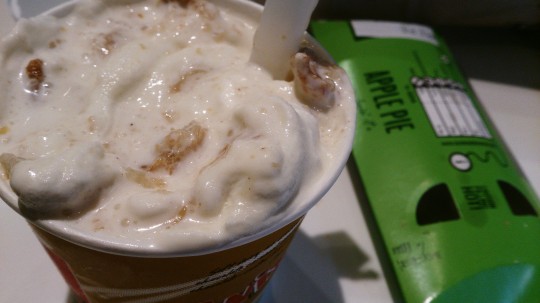 The recipes on the internet suggest that you order a plain McFlurry and get them to blend an Apple Pie into it. When I asked for Pie McFlurry in my local Maccy’s, they had no idea what I was talking about, and even refused to blend the items together.

So, I bought a plain McFlurry and an Apple Pie separately, doing all the work myself.

And it was fucking WONDERFUL. 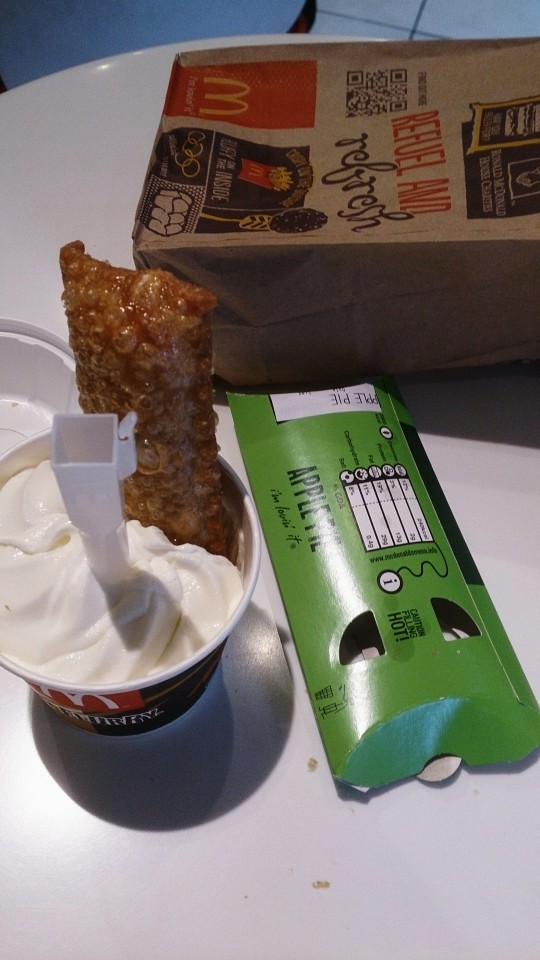 McDONALD’S, WHY DO YOU NOT DO THIS??

It’ll set you back £1.98, and the apple melts into the ice cream to create an oozy, creamy, delicious tub of joy. 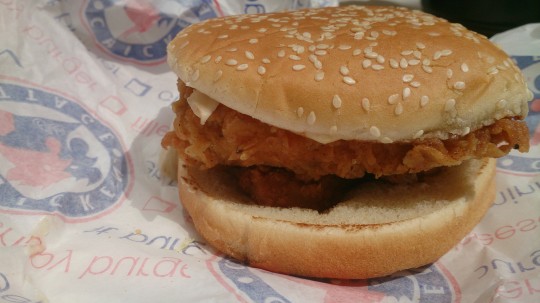 OK, so I made this up. But if you can’t create your own secret options for your favourite eateries then what kind of gourmand are you?

It’s Chicky-C’s very own Flame burger, with jalapeño poppers squashed into it. 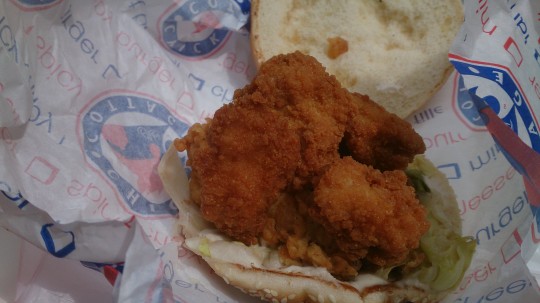 It was a spicy kick in the face, with a bit of cheese and lettuce to relinquish some of the pain.

Not particularly appetising while sober, but it’ll certainly put you right when you’re smashed.

Poutine is a delicacy from Canada consisting of french fries, cheese curds, and gravy. 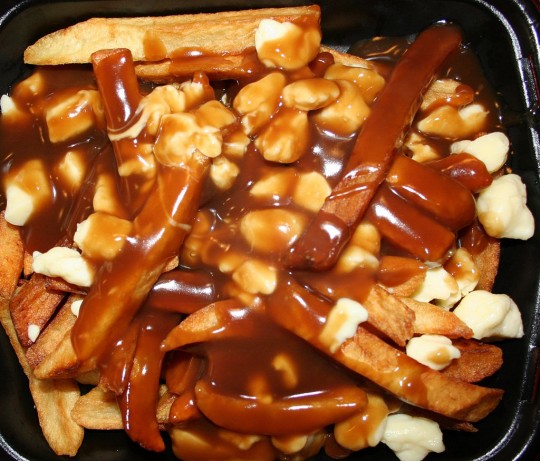 I tried to recreate this with items from The Cottage’s menu, and it was awful.

My local Cottage didn’t offer anything except chips and chicken. On the entire menu.

So, to make Cottage Poutine, I pulled the batter from some chicken pieces and drizzled them over the fries. 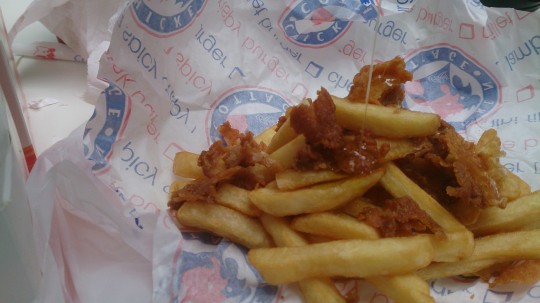 I then took the chicken and squeezed the grease from it to replace the gravy.

The result is a slimey heap of bland flavour, with a side of heartburn. 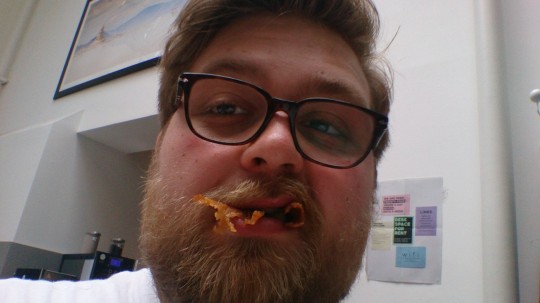 This is my ‘why the fuck did I do this?’ face

Not a recommended option.

Can you order a Big McChicken or a Liquid Cocaine by name? No. But are they incredibly tasty and worth the hassle of ordering? Absolutely.