Hassan Al Hallaq, 29, was sheltering with his eight-month pregnant wife Samar,and their two sons, Kenan, aged six, and Saji, four, when their house was hit by an airstrike on Saturday evening.

Hassan’s mother, sister and brother-in-law were also killed in the attack. 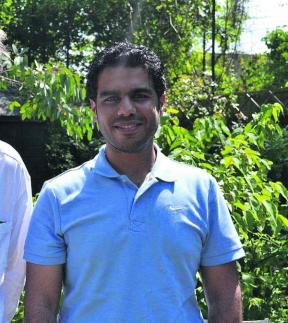 The bombing took place in the al-Rimal neighbourhood of Gaza city where the Al Hallaq family had moved after Israeli airstrikes left 60 dead in their home suburb of Shuja’iya.

Speaking at a vigil for the Al Hallaq family in Oxford, Tasnim Mahdy, a 20-year-old Egyptian and a friend of Hassan, told the Tab: “I knew Hassan personally. I haven’t slept in days. I’m in shock. He was a beautiful, beautiful man. Right now I am full of pain and wrath.”

Jihan Alfarra, a Brookes student and a holder of the same Gaza scholarship which brought Hassan to Oxford, addressed those gathered at the vigil: “Hassan was always there to help anyone who was interested in alleviating the suffering of the Palestinian people.

“Hassan and his family were asked to evacuate. My aunt evacuated. Everybody evacuated. But where do they go to? There is no place that is safe. Hassan left all the dangerous areas and he went to the centre of Gaza that is supposed to be safe. But that is what happened to Hassan when he went there”.

Theo Chalmers, a friend of the Al Hallaq family spoke about his memory of Hassan’s two boys: “They were two young beautiful children. I remember them playing, happily, in the garden with my brother’s kids a year ago”.

Hassan was awarded a scholarship to study at Brookes in 2012. During his time at the University he won the Technologies prize awarded by the University Department of Computing and Communication for outstanding achievement in the Masters Degree of Science in eBusiness.  He had recently started studying for a doctorate in Gaza.

Samar was working for a British charity aimed at preserving the traditional art of Palestinian embroidery.

In a statement, a Brookes University spokesman said: “we are deeply shocked and saddened by this tragic news. Hassan came to Oxford with his family and became fully embedded into life in the city and the University. Our thoughts are with him at this time”.

Members of the Oxford Palestinian Society will hold a protest this Saturday by Carfax tower at four thirty. The event will feature a speech by Oxford professor Avi Shlaim.