I’m letting people win a date with me on Groupon

444 people have bought dates with our comedian columnist

Regular readers will be aware that I have been on a Groupon adventure. Last November, amidst the ruins of a numbingly dull life, I embarked on a coruscating journey through the magical wilderness of Groupon, doing a deal a week ever since.

About 100 deals, and five grand later, today I became a Groupon, so for the next week you can buy a date with me on the site. 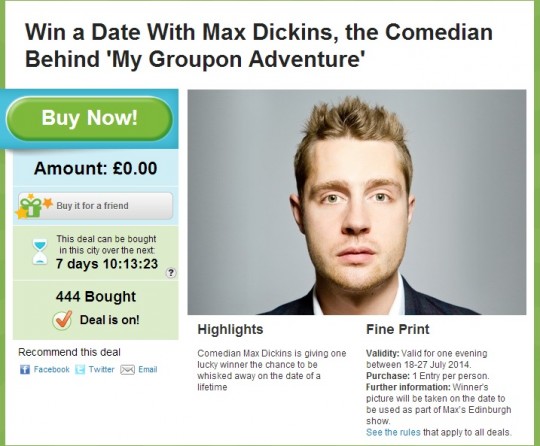 At the time of writing you’ll notice that 444 people have bought dates! And there’s seven days left. In fact, the deal’s been so popular it’s caused havoc with servers around the world, for example this message a stranger sent me on Facebook:

Obviously, the price isn’t too steep. I suggested that people might pay £10 to go on a date with me and Groupon laughed in my face. According to them I am literally worthless. I would suggest to any of my homeless followers out there that this might be a good chance to get a free meal. And a shag.

This morning I was front page on the Huffington Post, and made The Daily Star:

So it just shows you: dreams can come true.

The deal went live last night and within about half an hour I received a text from my ex-girlfriend informing me that her Dad had got involved: 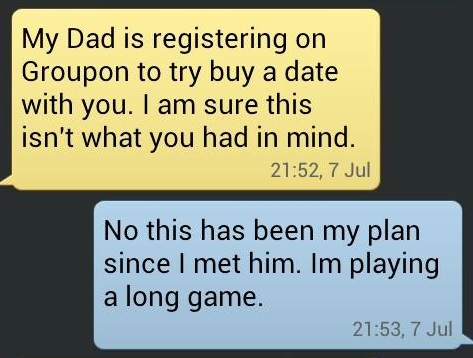 I’m delighted to say that take-up seems to have been strong. A number of lovely ladies have been getting in touch on Twitter letting me know they’ve purchased:

I’m glad that a date with me constitutes an “all time low”. I also got this message from a stranger on Facebook:

I resent that. If there’s one thing I am not it’s cheap.

This came in too:

So it looks like I’m a heart-throb these days. But that isn’t the only thing I’ve got in common with Johnny Depp, because according to Heat magazine: 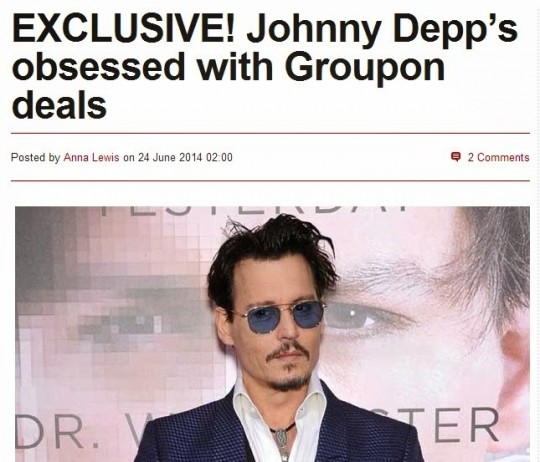 They say, “If he can get a good price for something, he’ll go for it. He just bought a new barbecue for the patio of his house in LA.”

Perhaps Depp might buy a date with me? After-all there’s nothing sadder than a BBQ for one. Come on Johnny: you know you want to!

I’d prefer a woman, obviously. But if it is a bloke I’d rather it be Johnny Depp than some doorman from Gateshead. Not because he’s so good looking, but because a man of his profile is much less likely to murder me. That’s the thing: anyone can buy this date. I could end up going for a Nandos with an arsonist on day release, or a cannibal, or-a Tory. I’m not sure what would be worse.

Or perhaps it might be an old flame? I had a PE teacher at school who took a bit of a shine to me, maybe he might make a bid? Having said that I’m probably a bit old for him now.

But in all seriousness, this sounds like it’s going to be great fun and I’d love you to be part of it, so why not make a bid? After-all, what have you got to lose? Who knows, this could be my next Groupon: 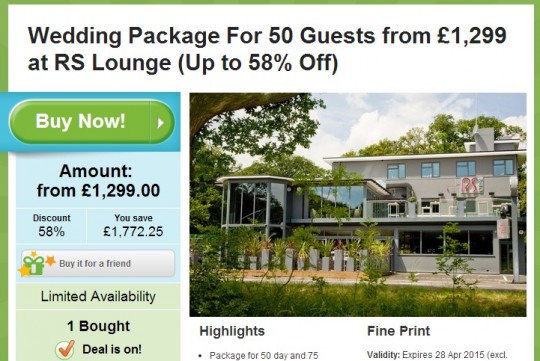 Just a heads up: you can see my Groupon stand-up show in London on the 23rd and 26th of July. Tickets here. And at the Edinburgh festival in August. Tickets here.