I’m selling my body on Groupon

The site dragged me out of my rut, but now I need them to get me a girlfriend

Readers of this column will know that all year I’ve been immersed in a Groupon adventure. Since November 2013, I‘ve done a different Groupon every week, and it’s changed my life. From a deep rut I‘ve slowly emerged a new man, having rediscovered my passion for life, resuscitated by the oxygen of new experience. I’ve done endless bizarre activities: colonic irrigation, spray tans, bee-keeping. I’ve visited psychics, become a Lord, and changed my name by Deed Poll to “Max Groupon”.

But it’s suddenly begun to feel a bit superficial. Groupon doesn’t hold the same mystique that it once did; I’m drunk on novelty and any more will make me sick. Back in November, I thought filling up my life with new experiences, new things, would make it feel less empty. I poured Groupons into my life, as if were a bucket, believing that once it was full I’d be happy again. But the thing is, I’ve realised that life isn’t like a bucket at all: it’s got a massive hole in the bottom. It’s more of a tube. You can never fill the bucket up, it’s futile. If you want to be happy, you’ve got to somehow transcend the bucket. It dawned on me that what I really need is love. And I thought: “Groupon has solved every other problem in my life, perhaps they can solve this one too?” So I’ve put out a plea to Groupon: help me find love by selling a date with me on your site.

You can watch the video here, including footage of me trying to break into their offices.

Did they go through with it? Find out on The Tab tomorrow. In the meantime, here’s a story about one of the first Groupons I went on: 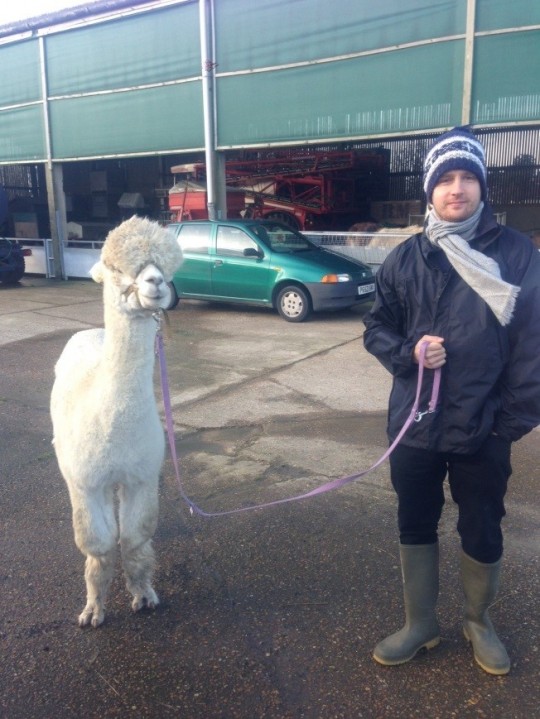 In February last year I went Alpaca trekking in Kent. Apparently in a car-park.  Annie the Alpaca was very suspicious of me. It was like a really awkward first date.

You’ll notice I’m wearing an alpaca wool scarf there, which is adding insult to injury for the alpaca. That’s like going to meet a pig wearing a skirt made of bacon. 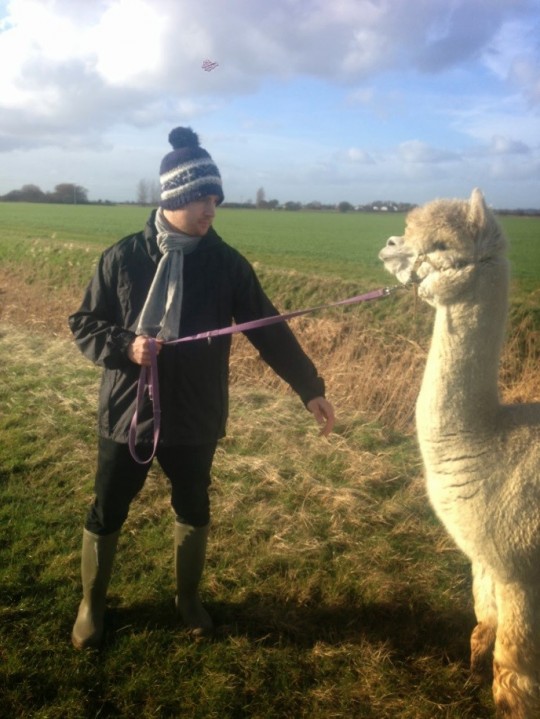 I think the alpaca trek is aimed at children, rather than 26 year old men. I know that because on the trek it was just me and a 7 year old girl. We got given some carrots to feed to the alpaca, but the little girl wouldn’t let me have any of them. And I honestly think she wouldn’t have given me any carrots if I hadn’t burst into tears.

The little girl was such a brat. She just wouldn’t stop talking, I couldn’t get a word in edge ways.

“Do alpacas go to school?”

All questions that I wanted to ask, but couldn’t.

Alpacas are famous for their thick and soft fleece. The thing is, alpacas don’t like you touching it. In fact they don’t like you at all. They’re prey animals, meaning that everything is trying to eat them, which makes them really jumpy. I discovered fairly early on that Alpaca Annie was terrified of fart sounds, which was hilarious. Eventually, our guide Laura let the eight year old lead the alpaca around because I wasn’t “mature” enough.

Alpacas are very hierarchical animals, and walk together in a straight line like a woolly conga. If anyone tries get above their station and jump the line they get spat at. Yes: literally spat at. Alpacas have two stomachs (like cows, and Americans), and they regurgitate green bile from the first chamber and gob it at you. They’re like sheep with ASBOs basically.

A fun day ended with Laura giving me and the little girl our certificates. 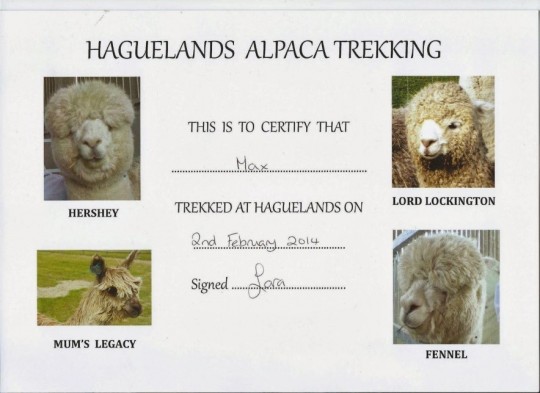 After handing me the card, Laura also gave me a badge, with the words “Total Star”, written on it and then ruffled my hair. It was at this point that I realised Laura thought I had special needs. I didn’t say anything.