If we’re going to panic about lad culture, at least make it an open discussion

Men need to be included in the conversation, instead of hung out to dry

While the moral panic over ‘lad culture’ has reached a hysteric level, men have been completely ignored in the attempts to tackle it.

In its report “That’s what she said”, the NUS defines ‘lad culture’ as a culture of “sexist and misogynistic behaviour observed in student communities”, “characterised by a holy trinity of drinking, football and fucking.” The reports name itself gives away the vilifying of men that seems to come hand in hand with those who elect themselves to deal with lad culture.

A recent Tab survey revealed 51% of male student respondents did not view lad culture as a problem at university. The failure to involve men by the NUS and others who have appointed themselves as judge, jury and executioner in regards to lad culture has now been exposed. After all, if only one gender is included in the debate, the problem will never be resolved.

This flimsy holy trinity definition makes lad culture a self-fulfilling prophecy by simplifying male behaviour into a bland, 90s stereotype that could have been cooked up by the marketing arm of Zoo magazine. By doing that, it fails to account for the vast swathes of bad behaviour from people who aren’t football-loving beer drinkers out on the pull.

Take, for example, the group of women who attacked a homeless man during Carnage in Cardiff a few weeks ago. Or the men who heckled female debaters at a student debating competition last year in Glasgow. The ability to be a vile cretin cuts across sexes and interest groups.

While no one would deny that women are the main victims of abuse among adults, with 85,000 women a year raped on average in England and Wales, the way the lad culture issue has been dealt with has sadly descended into farce. Take for example February’s NUS lad culture summit. 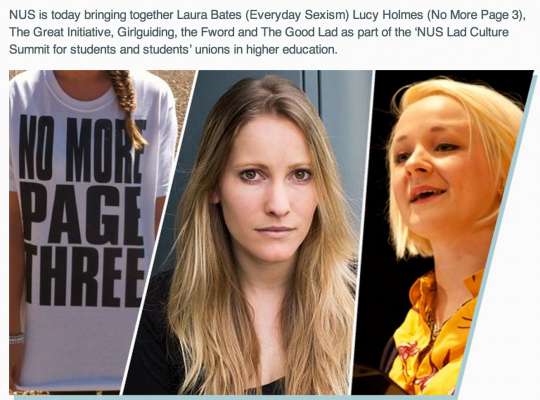 The fact that it was partially organised by the ban happy No More Page 3, who have been described by no other than themselves as part of a “dream team”, says a lot about the event’s  organisers who seem more about indulging their narcissism than involving all students in this debate.

There was a lot of talk about how men needed “space to explore their masculinity” from NUS officer Kelly Temple. The distinctly pejorative way in which all masculinity was phased throughout the day with a focus on male insecurities, meant that this masculine space resembles that of a play area for children to go while adults talk about all the important stuff.

There were plenty of meaningless slogans, climaxing with the NUS President Toni Pearce’s tragic line: “Go back to your campuses and get rid of lad culture”, a statement which is about as effective and original as Father Ted’s “down with this sort of thing!” 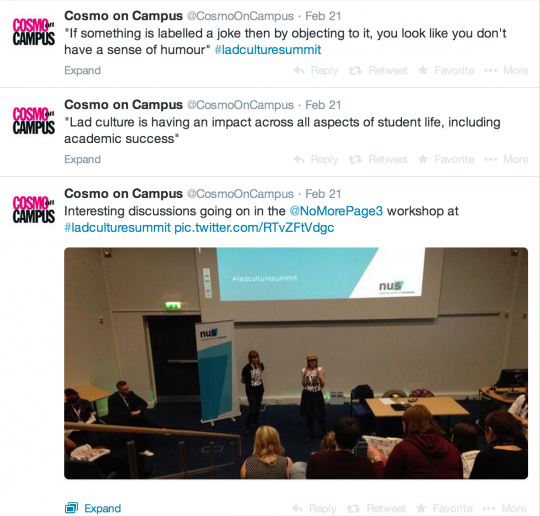 The empty words however, were not the worst the event had to offer. That came from the odious message that men should all be viewed as potential rapists, with the emphasis by Cosmopolitan UK on “confronting men about the effects of their behaviour”.

The treatment of acquitted Ben Sullivan as a rapist before his trial by his student union, where even President LJ Trup signed a petition demanding his resignation, shows far from the summit creating an inclusive environment. A McCarthyite style atmosphere has developed.

The NUS summit did little to include men. There were few men present, with the Guardian’s live feed admitting at the morning conferences the amount of men present was much less than a 50/50 ratio, and most of the talk of men portrayed them as perpetrators who engaged their cocks before their brains.

This “inclusive” attempt felt more like saying to all males “you are scum but we can teach you not to be scum.” Pretty alienating.

The NUS summit completely failed to engage with men with only one exception, in the form of a “here’s one we made earlier” former lad Dom Anderson.

The NUS Vice President for Society and Citizenship’s unreflective comment “lad culture is crap” did nothing to help. After that quip, he went on to say he used to be one of the lads, but thought about his young daughter, and about the importance of creating a better future for her, and realised that things needed to change.

In fact, much of what Anderson said unfairly misrepresented men.

.#ladculturesummit to the men moaning on the hashtag about this event, do our gender a favour; shut up, listen and/or read women's tweets!

The Worcester University Diversity officer Zac Pritchard, who is stepping down, has noted that some have seen the rise of a hyper male dominated culture as occurring with the internet’s ascension. While this may be true, a glance at some tweets at the lad culture summit reveals a failure to get men on board.

A Tommy Tp tweeted against the lad culture’s summits tendency to  “blame a whole gender for sexual abuse”. The lad culture summit failed to connect with many men and Tommy Tp’s tweet reflects this. 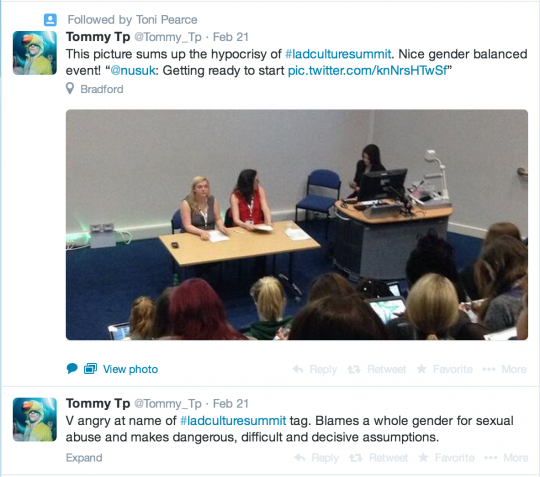 When I emailed the NUS, they replied, among some defensive jargon that referred to their own research as ground-breaking, that the NUS would “include both men and women in a national strategy team”.

However, hopes of including men are likely to be dashed. After all, Izzy Young from the University of Sussex Centre for Gender Studies, who spoke at the summit, admitted that  the NUS research did not interview any men at all because it “wanted to give a voice to women”.

Apparently in the eyes of the NUS giving women a voice means men have to be completely ignored, exposing just how blinkered the NUS approach to lad culture has been.

The male case isn’t helped by others and all roads lead back to Uni Lad, a site which for a long time could be summed up in its false disclaimer that “Uni Lad does not condone rape without saying surprise”. Although Uni Lad has become considerably tamer than it used to be, the Lad part of its name is still in there.

The fact that Uni Lad has a separate girls section in which violence against women is still treated in a light hearted way, with Dan Bilzerian throwing a naked woman off of a roof and Uni Lad remarking that Dan “just does not stop”, bears testament that their rehabilitation can be questioned. The rape and abortion jokes still haunt Uni Lad. 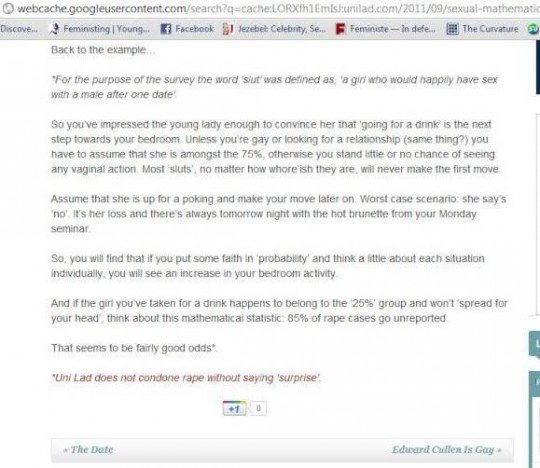 One website with an initiative to remove lad culture is the Good Lad Workshop based in Oxford. The name itself causes problems. According to a representative, the name is not even ironic, and it is hard to think of a more poorly chosen title.

Just as condescending are the photographs on the website showing the “Good Lads” who have attended their workshops. As if just those men who have been workshop approved can be ruled out as rapists just waiting to pounce. None of them constitute anyone who is not an Oxford resident so the Good Lad Workshop is a most parochial organisation.

The actual definition of what constitutes a “Good Lad” is not mentioned once. So they are vague as well as patronising, ultimately appearing as a comedy of errors.

While they aim to encourage a positive masculinity, it still reflects the unhelpful idea that all men deep down are rapists. Take one of their workshops which includes talking to men and asking them whether statements such as asking a woman out for coffee are acceptable, and then presumably judging them on the different subsequent thought crimes they commit.

Trapped between a Scylla of hyper masculinity, a Charybdis of condescending Good Lad Workshops and deeply unhelpful NUS summits, no wonder some young men are finding refuge in neknominations or even going one step further than being a lad and becoming stereotypical “Sad Young Douche bags” who then “troll everyone else’s sentiments”.

The point is not that lad culture should be left intact, it is that any attempt to remove it that demonises all males collectively, as some of the initiatives against lad culture have done, are counterproductive. For moves to stop rape and sexual abuse amongst students to succeed, we need to involve men on an equal platform, not as a pariah.