Where did all these politicians go to uni?

How does the House of Commons break down by uni? Which uni produces the most MPs, and the most Prime Ministers? We’ve got all the answers to some very boring questions

We’ve all seen the party broadcasts (right?), we’re fairly sure how we’d vote, and we all know what Dave likes to get in Nando’s.

But what about the thing that really matters? Where did all these politicians representing us go to unay?

Unsurprisingly Oxford and Cambridge fill the majority of seats in the House of Commons, with the London School of Economics trailing behind in third. Edinburgh, Glasgow and Durham also pump out a lot of politicians.

Oxford dominates all spheres of UK politics, even over its league-topping rival Cambridge.

Oxons fill more than double the seats in the lower house and cabinet than their Cantab counterparts, and twice as many Prime Ministers have come from Oxford.

When it comes to Prime Ministers, the distribution is even worse. Of 52 former PMs and the incumbent David Cameron, 39 went to Oxbridge. We’ve only had five Prime Ministers in the history of the UK who weren’t university educated. 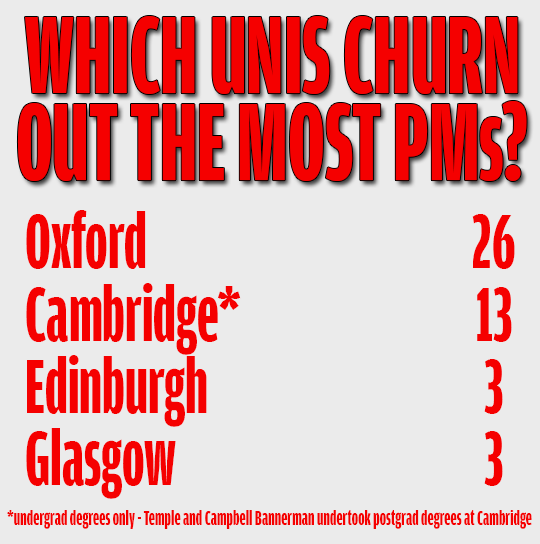 The Prime Minister’s cabinet isn’t exactly representative either. Of the 22 members, only one didn’t attend university.

Five went to Cambridge, and nine went to Oxford – that’s 64% of them from Oxbridge. This doesn’t even include Theresa Villiers, who went to Oxford for her postgrad degree.

It’s no secret that the House of Commons is incredibly unrepresentative of the general population of the UK, with just 147 females in the 649 member House and only 27 ethnic minority MPs. Some more digging by The Tab has uncovered a shocking comparison in terms of education. 84% of current MPs are university educated, with a whopping 126 members holding postgraduate degrees (what a bunch of nerds). A third of Tory MPs are Oxbridge educated, along with a quarter of Lib Dem MPs. That might make Labour seem like the party of the people, but when it comes to postgraduate degrees, Labour tops the table.

The House of Commons is full to the brim with people nerdy enough to go back to uni after getting their degree. 19.4% hold postgraduate degrees, and this lot have even gone on to get more than one. 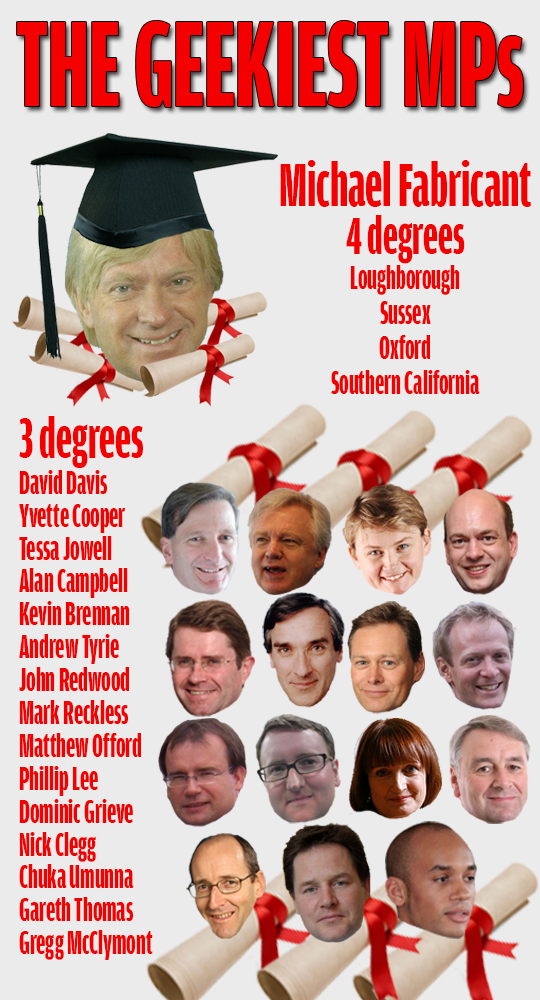 Swotty Fabricant lords it over the rest of the lower house

So if you thought the country was run by a bunch of posh nerds from old boys’ clubs, you were right.

If you’re boring enough to want to check over this data, it’s all here to download in handy .pdf and .xlsx formats.