Police are appealing for help to trace a student who hasn’t been seen for four days.

Megan Roberts, 20, a student at York St John University, was reported missing by her mother on Monday after a friend raised concerns having not heard from her following a night out in York city centre.

Thirty underwater police officers are searching the River Ouse in York after she was spotted on CCTV next to the water, but police are still calling on anyone who has seen Megan to come forward.

As concerns grow for the 20-year-old, North Yorkshire Police have been studying CCTV footage of her usual way home – as confirmed by friends – and alternative routes she could have taken.

They have not managed to find the fine art student on camera on one of these routes back to her home in the Clifton area of York, despite checking the tapes until 4am.

Megan was spotted on CCTV footage with friends on one side of Lendal Bridge at 2.10am. The group she was with were seen by the camera on the other side of the bridge at 2.20am – but Megan was not there.

In a press conference, Superintendent Phil Cain said they had deployed underwater search parties who are currently skimming the surface area of the River Ouse between Scarborough Bridge and Skelder Gate Bridge.

He said: “We currently have 2 dedicated search teams involved in the search, which is about 30 members of staff.”

Police added they had no evidence to suggest the student, who has a younger brother and sister, was intoxicated when she went missing.

“There is nothing suspicious to report of her disappearance at the moment.

“Megan’s disappearance is extremely unlikely and thus adds to our concern.

“I would appeal for anyone who has any information at all to get in touch with the police using the 101 number.”

At the press conference today Superintendent Cain reiterated the police appeal for information.

He said: “We are very concerned for her welfare and urge the public to come forward if they have any information on her whereabouts.” 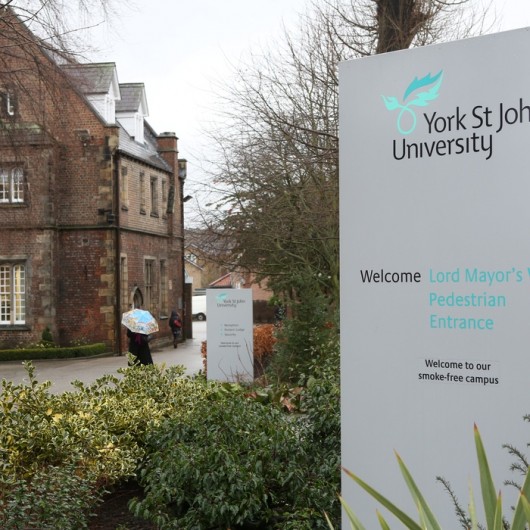 Megan is a student at York St John university

“We’ve got family officers deployed with the mother, and we are also in touch with Megan’s father.

“Megan’s family have stated they just want her to come back safe and well.”

Messages posted on Megan’s Twitter account suggested her and a friend were being “stalked” by an unknown male six nights before she disappeared in the city centre.

She posted that a guy was following them from pub to pub. Her friend Rockie Thorley also commented on the “creepy guy” bothering them

One message by Rockie Thorley, retweeted by Megan, said: “The bar staff have just noticed our stalker and come to tell us that they won’t be serving him anymore and not to worry we are safe”.

Messages were also posted regarding Megan reviewing text messages from an unknown number.

On Wednesday she wrote: “Will never understand why some men continue to message random girls without a reply…”

Police said they are aware of all messages but stressed they are not linking them to her disappearance for the time being.

Megan is described as around 5ft 6in tall, of medium build with long dark brown hair. When she was last seen she was wearing a cream knee length dress which had large brown and orange flowers on it and black plimsoll type shoes.

Anyone who has seen her since the early hours of Thursday morning or knows where she is now, should contact police urgently.