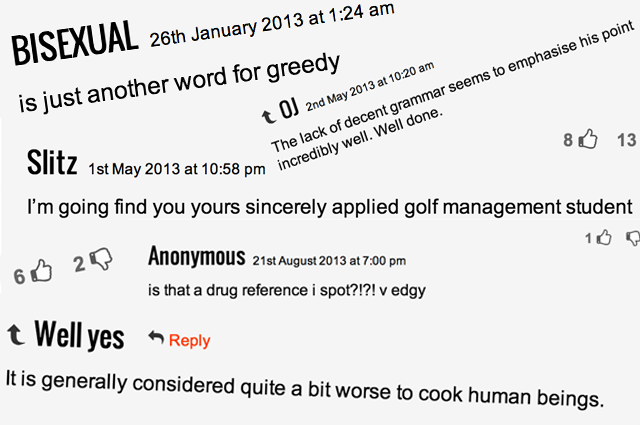 The year in shit Tab comments

Here are some of the true lowlights of the year across The Tab’s 34 sites.

This year the Tab has been read by more people than ever before. It’s a shame some of those people are wankers. Yes, from the pointless, to the stupid to the mundane, the comment board was often faith-in-humanity-trustingly bad. Here are some of the lowlights of the year across The Tab’s 34 sites.

While most of us were still trying to figure out how we ended up in field with a traffic cone and a tattoo, an anonymous contributor wrote a thoughtful article on the problems with labelling sexuality. And it was generally well received. Generally. 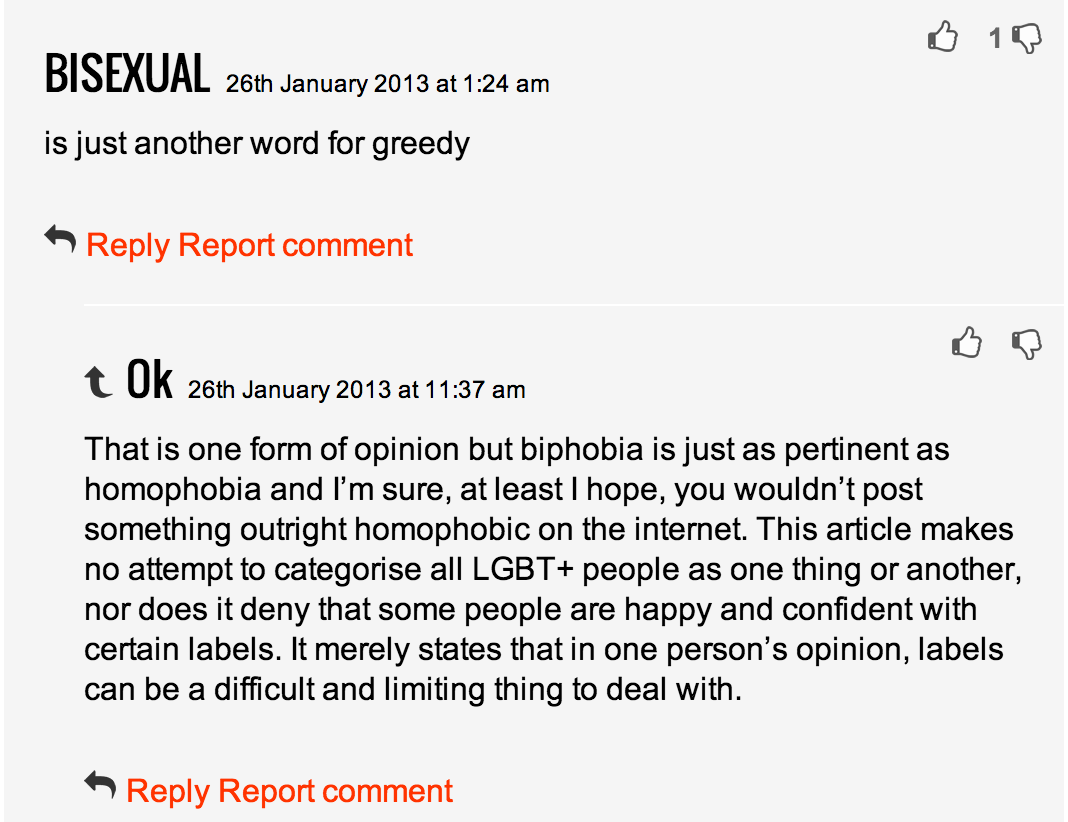 Part of me wants to give him the benefit of the doubt and say he was trolling ironically. But part of me also wants to tell him to fuck off. And since having both is apparently greedy; he can fuck off.

Not surprisingly this makes a lot of people crushingly lonely, so lonely that as soon as a journalist mentions their mate John in an article this happened:

Luckily, he was let down fairly gently.

We’ve all done stupid things when drunk. I for one spent two hours walking around the outskirts of Birmingham debating theology with a homeless man.

But James Wilson has to take first prize in the category of drunkenfuckup-ary for frying his mate’s hamster. That’s right frying a hamster. That’s disgusting; everyone knows you grill them.

Still, not everyone found it so entertaining. 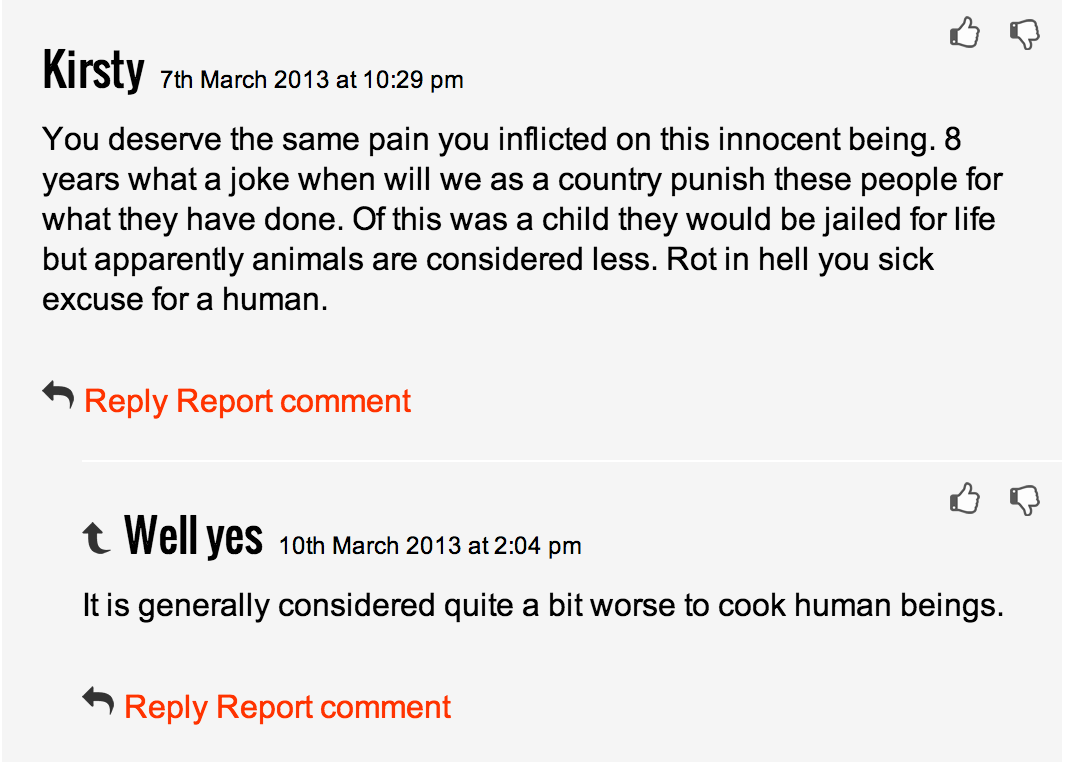 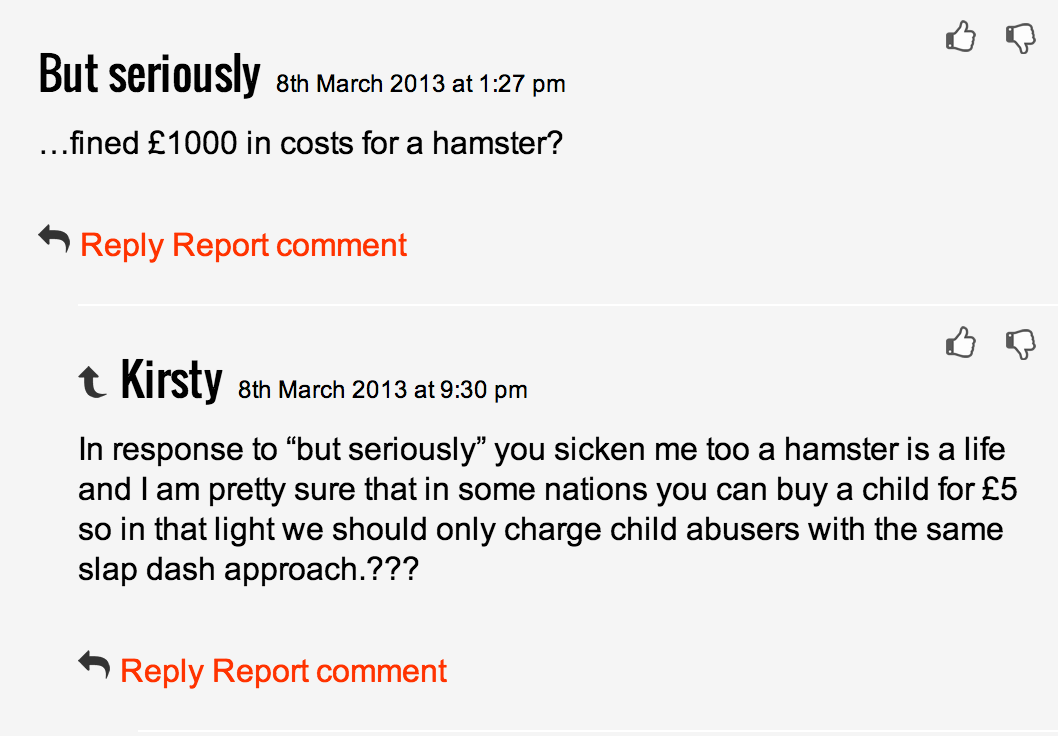 I’m going to ask this one more time. Can Nick Griffin and Ann Widecome stay out of the comment section?

May arrived and with exam pressures mounting on many, I may have taken a couple of potshots at my Uni’s attempt to ensure we never win Uni of the year again: Golf Management Studies.

Angry, the course’s students took straight to the keyboards, after being advised that flinging their own faeces at me wouldn’t help their case, to defend their intelligence. 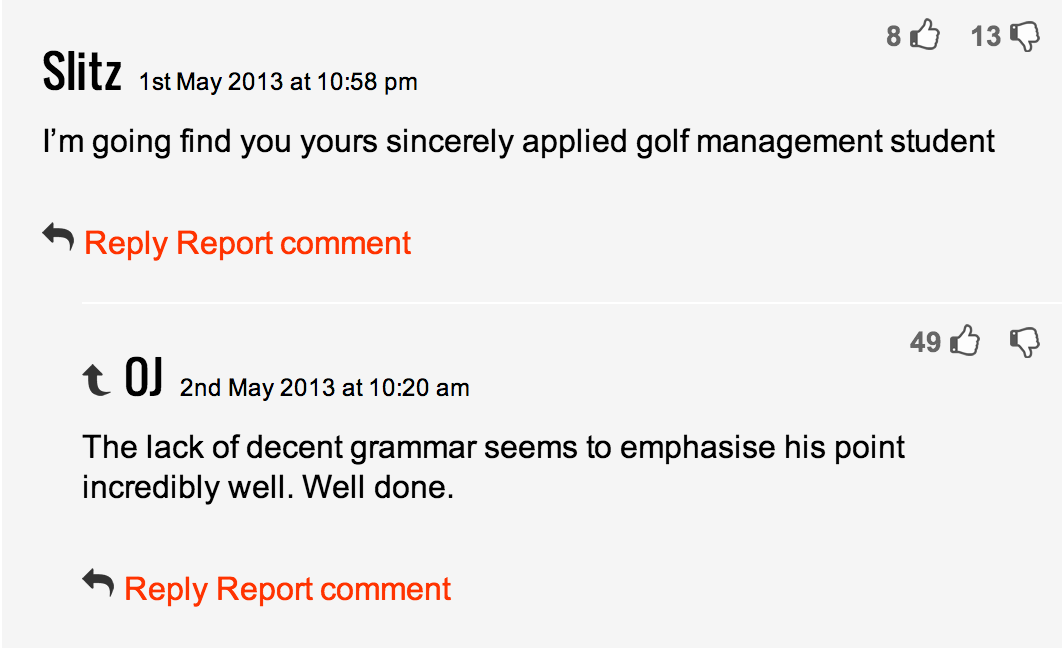 June brought the new Guardian League tables and Oxford was pipped to the top spot by Cambridge. Still, one Oxford commenter found one thing to celebrate.

Take it that room is still empty. You’re a real catch.

Jury’s worst comment sounds rather reasonable at first glance. In a national poll about the worst celebrities to get honorary degrees from Unis someone posted this:

Seems fair. Maybe we shouldn’t be so swift to judge. Out of interest who are these candidates I’m unreasonably judging? 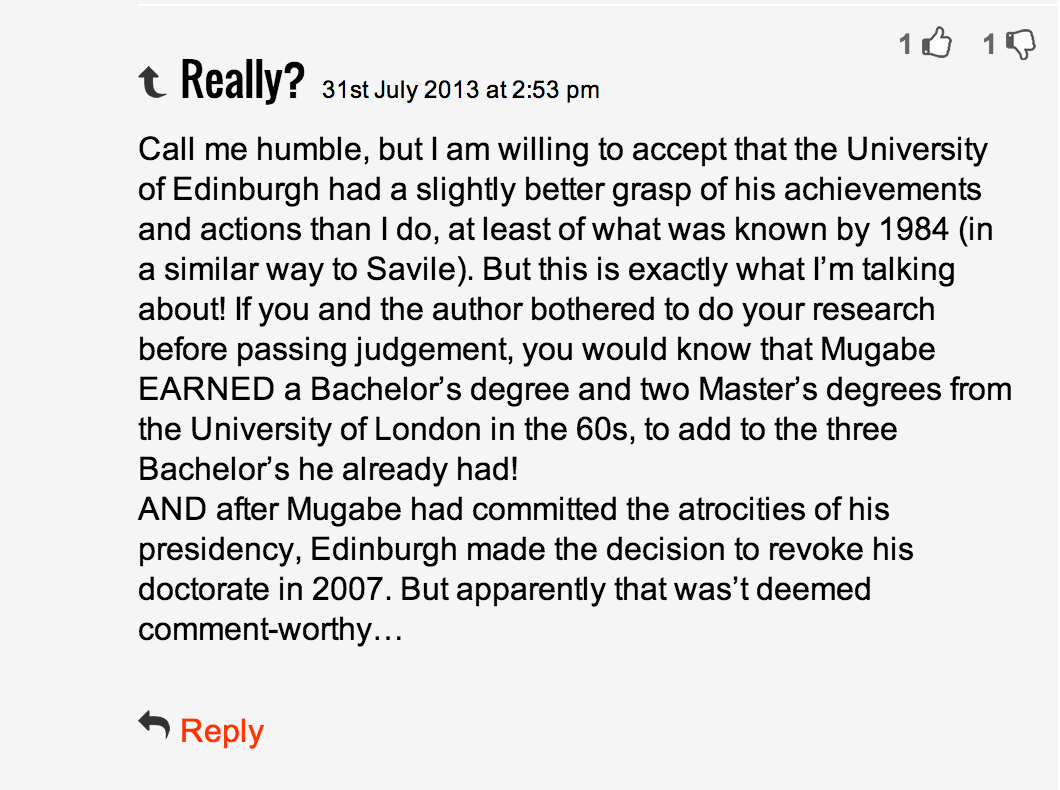 You do know that Kermit doesn’t really have much of a life outside the media right? It mainly comprises of sitting inanimately. And I think we can probably judge Saville and Magube. Stop moralising and do what I did; trying to work out which of the candidate looks more like a frog, Kermit or Susan Boyle.

Oh come on. I’ve never been to a festival but even I know you can’t write a festival review without referencing drugs. That’s like writing a Lasagna recipe without mentioning cheese or a Norwich tour guide without mentioning the best spots for incestuous cottaging. Honestly, when I heard drug references were no longer edgy I was so shocked my eyes went wide open, my jaw clenched and I had to drink loads of water.

In the height of Freshers, a Plymouth club had a powercut. While this left many underserved, one person clearly had enough.

I don’t know what he drink but from the looks of things it had floor polish in.

A photo snapped in October brought about a rare chance for people to see Spencer Matthew’s knob.

That is if you could see it. It took me a while. but then again, I was expecting it to be on his head. even when looking in the right area, trying to find it was a bit like looking for a tiny nail dangling from a giant bastard shaped haystack.

The small scale of Spenny’s tackle left some confused.

I didn’t think I had to explain this. The reason people sleep with Spencer Matthews isn’t the size of his dick. It’s because he has more money (and slightly more charm) than Jabba the Hutt.

Okay, if you are shocked by The Tab trying a fleshlight you probably shouldn’t have clicked on an article called “The Tab tries: a fleshlight”. Unless you are using sick in the complimentary sense. In which case fuck off to the 90s. At least he had some tips…

With deadlines looming and everyone bored off their tit you’d think a fire in student accommodation would be newsworthy.

Especially since it destroyed a kitchen and caused hundreds to be evacuated.

As a side note, this comment comes from the article “Fire in The Pavillions”, which should totally be the title of a cricket romance book.