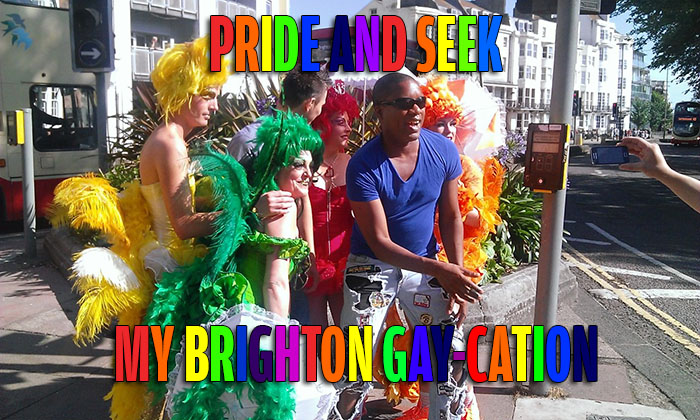 Pride and Seek: My Brighton Gay-cation

A train journey from London on Friday night offers all the introduction needed to Brighton Pride. Two men are sat sharing a bottle of rosé as we shot past Haywards Heath, complaining about their attire. Nowhere else will you hear the following sentence: “why the fuck am I wearing zebra print, that’s like so ten minutes ago.”

Pride is Brighton at its biggest, its best and its most sartorially fabulous. Arriving at the top of St James Street on Saturday afternoon, the vein down the shaft of Brighton’s gay district, you wonder whether you’ve got the wrong day.

The only displays of an LGBT community a smattering of rainbow flags in shop windows…then you see a slim young man dressed as Xena: Warrior Princess and your doubts are laid to rest.

Some Scots at a street rave.

Not once in my twenty-one years have I attended Pride in my home city. Either I’ve been too young, busy or abroad.  One of my earliest memories as a child is walking through the Old Steine and seeing a relatively pretty lady. Said lady was addressed by a passing lesbian couple as “Paul”, and responded in a voice as deep as Amanda Bynes’ self-worth issues. Since that moment, I’ve realised that things aren’t always as you expect in Brighton.

Continuing down the street, the ‘T’ in ‘LGBT’ grew more and more prominent, from those who’d clearly spent hours perfecting their hair and make-up, to this rush-job schoolgirl:

Even living in and around the city all your life, it was a shock to the system. Brighton’s gay-friendliness is always a bubbling undercurrent, an integral part of the city’s bohemian outlook. During Pride, it floods the city in a rainbow-coloured swell of no-holds-barred, unprejudiced passion.

It’s hard to put into words just how eclectic the weekend was. Here are just a few of the treats on display in Britain’s proudest city:

A lot of ill-advised bare flesh.

These guys making a killing on N2O sales.

The difference between pissing in the sea and pissing INTO the sea.

This seagull that you probably shouldn’t fuck with.

This guy who just needs a shower.

Taken aback as you are, Pride does not relent. It leaves you no option other than to embrace it. So for the evening, I adorned some face paint and hit the town. Hard. Due to the Russian government’s anti-gay stance, we chose to sample the secrets of Finnish vodka. It’s like Zinedine Zidane’s head: blissfully smooth yet surprisingly lethal.

One at a time, boys…

Sadly, the day ended on something of a sour note. My friend got an unwelcome level of fist action on the beach…as he was roundly beaten by a group of punters. Then on the way home we encountered a paralytic and unconvincing drag queen on the pavement and called an ambulance. Just goes to show, Pride will chew you up and spit you out. She’s not a swallower.

All in all then, for one weekend of the year, Brighton is a beast unshackled. A little bad blood is no reason not to go down south and kick it.